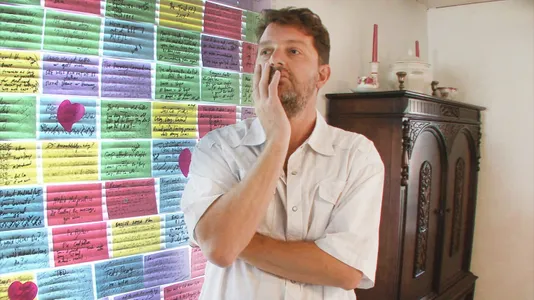 Entertainment News on December 28, 2018 0Likes At The Movies
ShareTwitterFacebookInstagram

The American Healthcare System has been making errors for a very long time. First-time documentary director Steve Burrows accidentally makes a documentary about his mother’s traumatic health error. Producer llan Arboleda helps bring Burrows’ idea and vision to life with a show titled Bleed Out on HBO. HBO’s Bleed Out is about the scary healthcare journey that is still going on with Burrows and his mother who is in a coma.

ATM: How did having a loved one as a victim to an American healthcare error open your eyes?

SB: I knew nothing when this happened to my mother. I started to ask a lot of questions and started to get a lot of different answers. Some seemed okay, and some did not seem okay. I started to hear from other people that they had problems in their families. Suddenly, it seemed like this was not going to be a one on one thing. Once I started to discover the universality of this problem, I did not want to make this movie a movement.

ATM: Do you think some of the health care reps were giving you the run around instead of saying they did not know?

SB: One of the main problems was that there was a continuation of care with no one in charge. When I look at the whole thing now that it is settled, I see what the problem was in my mom’s case and a lot of others. Who oversees the patients’ care? I still do not know who is in charge after ten years later going through my mom’s care. We have asked. Who is in charge of the healthcare?

ATM: How did you go about picking the right scenes for your mother’s film?

SB: Great question. I have never done a documentary, so I was not sure how to approach it. The first thing I did was writes an outline. It started with my mother, her life, then the coma. It started on a piece of paper the main story points. I went through all the footage. I had several editors that I worked with that helped me go through all the footage and ground things that helped me tell the story. We had over 300 hours of footage. We had to get the film down to 90 minutes. This was rough. When looking at a scene: Does this further the story? Does this help the story? Does this help my mother’s story? We took it in steps. It took a long time. We edited for almost three years. We were changing things up into a week ago. We just finished this.

ATM: As her son, how would you best describe your mother?

SB: My mother was a whirlwind of energy, free spirit, she chose to be a special ed teacher, she was so empathetic to helping others, world traveler, had a great sense of humor, she was full of life. Then she got stuck with this, and it all stopped. I say “was” because she is still inside of all these things, but she cannot articulate it. She cannot outwardly do any of this stuff anymore. She was a beautiful person.

ATM: What tools have you taken from her? What values or teachings has she taught you that you still use today?

ATM: Emotionally describe this situation with your mother.

SB: Emotionally at times it is hard. You want to keep your friends and family very close because you are going to need them. They are going to need you someday too. When I started doing this, I hope people who never been through this never have to go through what my friends and family did. Some will. When you go into a hospital, all the doctors are heroes, but they are human. You want to go in as an advocate asking questions. Everyone needs an advocate to help them navigate through the hospital. Also, write down your questions on a piece of paper. You are going to forget to live while in the emergency room. When something happens right now basic questions, go with an advocate, and ask the questions. Shop around for hospitals and doctors like your life depends on it because it does.

ATM: A lot of people hold on to materialistic things, but in times like this that become not important. What was the one thing you took with you to remind you of your mother when this event happened?

SB: When something goes wrong as it did with us all the materialistic stuff goes out of the window. None of these things matters. I do not know about the afterlife. All I know is that we have one shot at it here. All that matters are relationships with your friends and your family: parents, brothers, and sisters. You learn very quickly when going through something like this who is going to be with you and who is not. The people that I thought I could trust before this happen were the exact people I could trust. I hope no one has to go through this.

ATM: How does this event with your mother help you get a better sense of life and your health?

SB: This is another good question. Life can be very short. I know it sounds cliché, but we are here for a blank. I learn through my experience with my mother is to not take anything for granted. Do not worry about small things. All these things are going to get worked out. Concentrate on the big stuff and the priorities financially, ethically, morally. What is important? Your health is everything. You must treat your body well. Things are to fail as your body get older in general. I do not have to watch my mother suffer in the hospital. It does not have to be this way. Embrace the moments. There are so many things I used to worry about that I do not anymore. They are not important.

ATM: As the producer on the film, what did you observe about the errors that can occur with the American health care system?

IA: For me, hearing these stories make me think there was a universal issue here. The reason I wanted to get involved with the film was to take these very personal stories to make it a microcosm for a greater healthcare issue in general. We encapsulated and highlighted well how her story was a national problem. While telling her story, we are telling others.

ATM: How did you plan to work with Steve as a first-time director to get his story across?

IA: My company is called Creative Chaos. We are a company that makes documentary features. When he came to us, we knew how to make this a bigger film that is a small personal story. We put a sizzle together of the more important parts of the film. We took it to HBO. Impact Partners and HBO ended up coming on board. We worked with Steve from some ways of managing ten years of footage. It was his personal story, his journey; we thought this was important. We worked with him on a creative and physical process to deliver the film.

ATM: What conversation continues about the errors of the American healthcare system after the film?

IA: It is a cautionary tale. Ultimately the film highlights that you have to be an advocate and have second opinions. You have to continue to be vigilant through the healthcare process. It is never-ending days of going down the rabbit hole and trying to get out — someone who does not have half of his persistence or ability to live in this precarious position.

BACK TO THE FUTURE: 35 Years Later