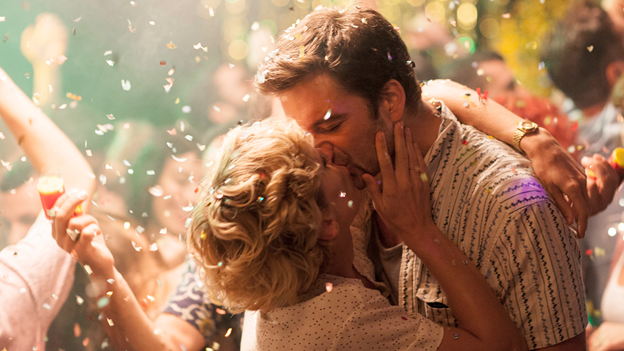 Mickey (Sebastian Stan) and Chloe (Denise Gough) meet at a disco house party. The couple becomes pushed together, and they become romantically involved for the rest of the film. It follows the couple and their times over the weekends, getting arrested after being completely exposed on a beach or their rides on the scooter throughout the Greece setting. It is a passionate love cycle with the typical ups-and-downs and hits the methodical beats in a rom-com story (including a dash-sequence in the first act where Mickey runs to the airport to prevent Chloe from leaving the country).

Stan and Gough have tangible chemistry, but it never transcends the boundaries of the average drama film. Most of the film is more like a comedy where the two engage in parties, alcohol, and have bizarre friends on standby. Heck, the drama element is nowhere to become found until the third act, where the two start having some more serious discussions such as taking the relationship further or exposing their pasts. That is where Papadimitropoulos shines in telling his feature between the two lovebirds because it gives details the audience can associate with comfortably.

However, it is also the part that brings baffling creative decisions to light. Why hit the reset button immediately after the couple fight or bicker? Why not continue to build upon the consequences before the climax is reached? It reminds me of the film Happily directed by BenDavid Grabinski, where the couple came back to the same spot as they were at the beginning. Technically, the same does happen here but in a frail fashion.

The film charts the unique relationship and inevitable complications, but it does not take full advantage. It never pops, even the intrusion of dragging in the old flames from both partners’ pasts and the ridiculous actions Mickey and Chloe suscept themselves to feel all too familiar. The party may stick around for the weekend, but when we reach Monday, we might as well clean up and go to another.