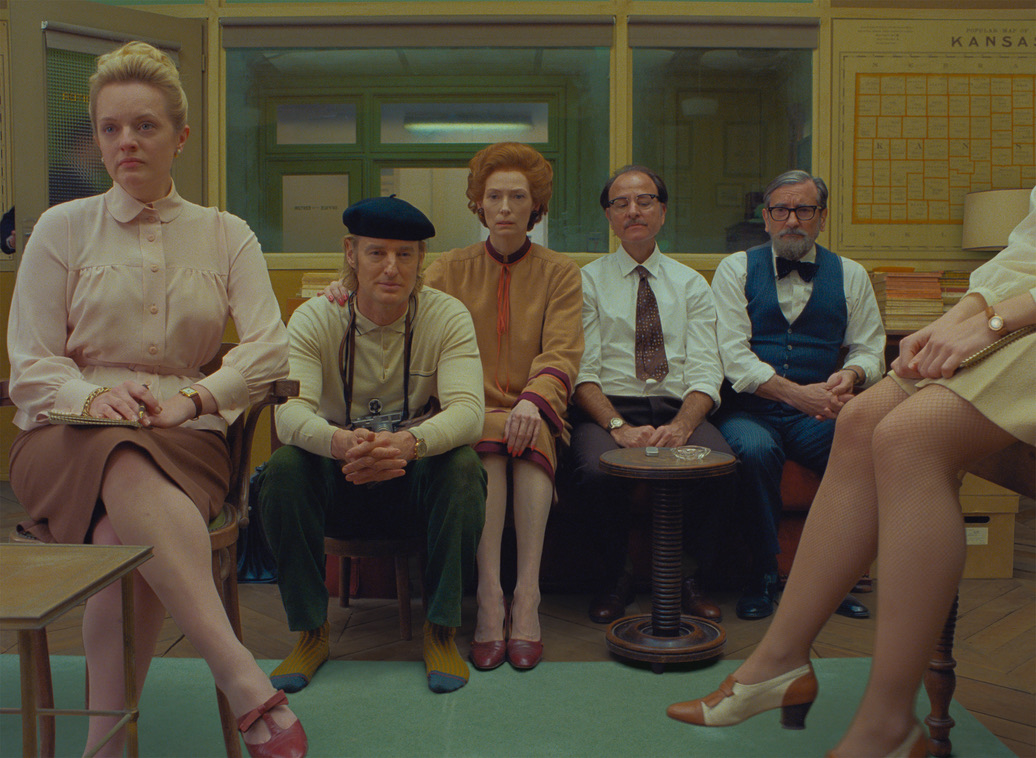 It almost feels wrong to be writing a review for Wes Anderson’s love letter to print journalism on a computer; a typewriter would be far better for the aesthetic. Much how Quentin Tarantino showed his love for Hollywood in the 1960s in “Once Upon a Time… In Hollywood,” Anderson shows the same level of care for print journalism; just in the most Wes Anderson way possible. Be that as it may, “The French Dispatch” is, yes, the most “Wes Anderson film” to date and is like a compilation of greatest hits, though Anderson still finds some ways to surprise. It’s by no stretch of the imagination as good as his previous live-action film, “The Grand Budapest Hotel,” but provides a lot for fans to chew on.

“The French Dispatch” is made up of three main stories that are based on actual stories from The New Yorker: “The Concrete Masterpiece,” “Revisions to a Manifesto,” and “The Private Dining Room of the Police Commissioner.” The first follows an incarcerated artist (Benicio del Toro) and an art dealer (Adrien Brody). The second story is inspired by the May 68 protests and follows a journalist (Frances McDormand) and a student (Timothée Chalamet). The final story follows a story written by a food journalist (Jeffrey Wright) and includes a wild kidnapping story.

The Wes Anderson aesthetic is not for everyone; for those who don’t know what his aesthetic is, I recommend watching “The Grand Budapest Hotel” or taking a peek into the “Accidentally Wes Anderson” book at your local Barnes & Noble. The perfectly symmetrical shots; seeing the inside of an aircraft (think of the shots of the submarine in “The Life Aquatic with Steve Zissou”); a quirky score; Bill Murray are all featured and have been mainstays in Anderson’s career. But even the greatest rock bands can feel stale if they continue the sound they have had for years, and something about “The French Dispatch” feels off. It’s not a bad film, it is one of the easiest to watch out of his filmography, but it feels as though Anderson is well aware of the popularity his style has gained, and that may be the biggest flaw of them all.

“The French Dispatch” includes a nice assortment of the usual Wes Anderson collaborators (Bill Murray, Owen Wilson, Tilda Swinton, Edward Norton, Adrien Brody, Jason Schwartzman), but also has some first-time collaborators (Jeffrey Wright, Elizabeth Moss, Henry Winkler) that fit right in. It does, however, feel at times as though Anderson is just checking off the list of names in the cast. That may be what occurred, but it did feel equivalent to cameos in a Marvel flick at times. For example, it didn’t even occur to me that Jason Schwartzman was in the film. Of course, it makes sense that he would be, but there is so much going on that I didn’t have a chance to process that he is a cartoonist on the paper until after the film ended.

Somehow, the short runtime of 103 minutes does feel a bit long. Perhaps it is because of the three anthology stories, an unnecessary detour to introduce Owen Wilson’s character, and a short epilogue, but each story felt like an SNL sketch in that they felt like they overstayed their welcome. The Anderson aesthetic begins to feel stale about two-thirds into each story, and the first one about the artist and art dealer felt the guiltiest of this. Generally speaking, a Wes Anderson film has pacing that is short and sweet to the point that you don’t check your watch, but that is not always the case in “The French Dispatch.” Again, it could be that there is too much going on, and with the knowledge of there being three stories to get through, hoping that the next one gets better is an unusual feeling for Wes Anderson.

One exception to the Anderson aesthetic feeling redundant is found in the third story (ironically my least favorite of the bunch). During a police chase, the film switches from live-action to animation, in a style that was both vibrant and new (aka not stop-motion). It was a welcome change and was able to show the ridiculous nature of the chase in a way that makes sense for a Wes Anderson movie, including characters getting out of cars, running a lap, and then being chased back into their car as the chase pursues. I don’t think seeing a man get flipped by a car and landing on his feet would resonate quite as well if it wasn’t animated.

The biggest strength of the film, however, is the meticulously crafted sets. “The Grand Budapest Hotel” created a similar sense of making sets feel like a whimsical fantasy that you would like to visit yourself. Whether it’s the streets of France or the electric chair room in a prison, the sets welcome you into this world. But that, like the great cast, should come as no surprise to fans of Anderson. Perhaps newcomers would be taken aback, but it should come to the shock of no one that the sets are wonderful.

Like many others, I am a big fan of Wes Anderson, and while I wouldn’t go as far as to say that “The French Dispatch” was a complete letdown, the expectation that the marketing set up (which was to join Anderson’s Mount Rushmore of films) was not met. The cast is great, but Anderson has never had a cast that was anything other than that, and while the whimsical worlds he creates are there, it is perhaps too self-aware for its own good. At the end of the day, it is a love letter with heart in all the right places, but it can’t help but feel a best a tad redundant. “The French Dispatch” would not be a good place to start a newbie to Anderson’s filmography—it would serve more as a crash course to his style than anything—but it’s still an enjoyable film that just doesn’t live up to the lofty standards. That is what happens when a talented filmmaker such as Anderson sets up such a high (and perfectly symmetrical) bar.