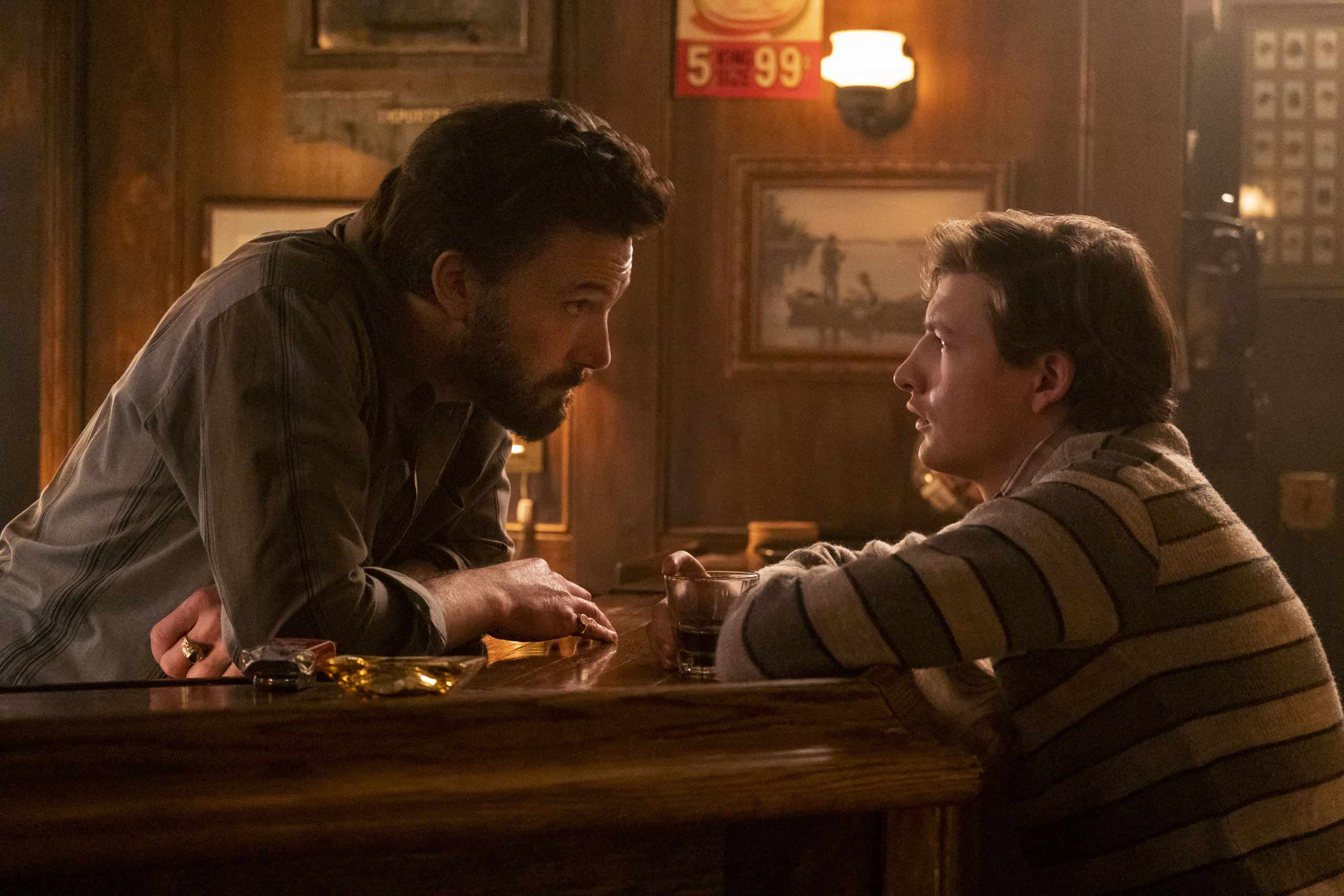 “The Tender Bar” is the tale of two halves; the first is one of the most endearing films of the year while the second half was a hodgepodge of clichés and some heartfelt moments seen in the first half. Honest performances elevate the film beyond Hallmark status, and Ben Affleck is going to once again enter his name into the hat for an Oscar with his heavyweight performance.

After “The Way Back,” Ben Affleck deserved an Oscar nomination at the very least for that brave performance. Affleck now plays Uncle Charlie, J.R.’s cool uncle who slips you a twenty and gives long lectures about life while he himself made the mistakes he preaches about all while maintaining his cool, calm, and collected demeanor. Don’t get it twisted, Uncle Charlie is no wimp. He still picks fights he cannot win, and he is as quick as ever with his comebacks. It may just be that damn near-perfect smile that Affleck has that can almost instantly win you over. Uncle Charlie’s bar, The Dickens, is the perfect representation of the type of guy Uncle Charlie is; filled with lowly guys who reminisce about the good old days while constantly finding the bottom of a bottle of beer. It’s also Uncle Charlie that helps J.R. get through his identity crisis; setting him up with an endless inventory of books to get through and great advice that only a cool uncle can give. Affleck once again delivers a knockout performance in a role that is built for him. Good things come to those who wait, and it only feels like a matter of time before Affleck taking roles in small films, with the exception of his presumed last time putting the cape and cowl back on in “The Flash” in 2022, pays off with Oscar gold.

All of the pressure rests on the shoulders of J.R., played by Daniel Ranieri as a youth, and Tye Sheridan in the older years, who spends most of his days that he is coming of age hanging with his Uncle Charlie at The Dickens. The consistent group hanging by the bar doesn’t change over the years that “The Tender Bar” covers. They are the type of guys who focus on what could have been instead of what can be done, and it’s a constant reminder to J.R. that he is destined for things. From the beginning, the distinction between a child’s view of the world and an adult is made clear. For example, J.R. loves being at his grandfather’s house; family comes over and he is always surrounded by family. Meanwhile, his mother Dorothy (Lily Rabe) and Uncle Charlie have a view about living in their father’s house that is less flattering. Daniel Ranieri gives a great performance, specifically in the scenes where his father, played by Max Martini, fails to show up. Ranieri is able to convey immense heartbreak on his face, as seen when he waits for his no-show father to take him to a baseball game, and the fact he gelled with Affleck in their shared scenes is immensely impressive for an actor of such a young age.

Things do come to a halt in “The Tender Bar,” specifically in its second half. Unfortunately, it is not nearly as consistent as its first half. J.R. goes off to Yale, but this journey of “puppy love” and finding his way in the world is far less emotionally investing than the film’s first half. The 108-minute runtime is short and sweet, but the first half of the film revolving around his relationship with his Uncle Charlie, his mother, and his growing up in the bar was more heartfelt. And to be completely fair, it’s not as if Tye Sheridan isn’t good in the film. In fact, he gives a really good performance. J.R.’s love arc with Sidney (Briana Middleton) is as repetitive as it likely was in real life, but it runs its course after the first couple of scenes that they share. It’s also not very fleshed out; the two meet, J.R. is invited over for Christmas and then broken up with, and then begins a two-minute montage that covers the two years after the breakup. J.R. gets stuck in a moment, and as relatable as the story arc is, it’s hard to feel bad for J.R. when Sidney is pretty clear that what they have is nothing more than a hookup. But this story arc does give one great moment, and that is when J.R. has to meet Sidney’s parents, played by Mark Boyett and Quincy Tyler Bernstine, on the same morning he is broken up with and driven back to the train station.

Additionally, the final scene is supposed to be seen as this official “passing of the torch” to adulthood for J.R. when his Uncle Charlie gives him the keys to his car. He drives off with some voiceover closing the book on this story, but the significance of the car is unknown to be completely honest. Sure, the car was important to J.R., it was his uncle’s after all, but aside from one early scene where Uncle Charlie and J.R. scoop up the ragtag group for bowling, the car isn’t a major part of the story. It’s simply Uncle Charlie’s car, and perhaps him throwing the keys to J.R. to get out of the little town in Long Island is all it was meant to be. But it felt as if it was supposed to evoke even more emotion or have more resonance. To make matters worse, the end credits show more of J.R. and the car, but that doesn’t really help decipher the meaning of the car. It’s likely just unused footage that was left on the cutting room floor. Again, it is possible that all of this is for nothing and the scene was not supposed to provoke this kind of conversation. It’s just a shame that the sequences during the credits make the ending even more puzzling.

“The Tender Bar” is far from perfect; in fact, there is a fair argument to be made that it is cliché and nothing special. But Affleck’s knockout performance elevates the film. There is something about this older and wiser Affleck that has emerged in recent years that is hard to look away from. George Clooney is a strong director though some of the quick zoom-ins felt straight out of a Wes Anderson movie (“Moonrise Kingdom” to be exact). But credit should be given to “The Tender Bar” for being a relatively honest depiction of someone’s life that saw both highs, such as being hired by The New York Times, and lows, such as being fired from said job or broken up with the morning after the first hookup. Even if the story is based on the biographical novel, it could easily have given J.R. and Sidney an ending where they finally reconcile and get married; instead, J.R. never finds love in the film. It’s not “Boyhood,” which truly showed the full growth of its subject with a runtime over an hour longer, but “The Tender Bar” still accomplishes its goal of making the viewer feel as though they have been on this long journey with J.R., and there’s a likability with “The Tender Bar” that is hard to put into words. Perhaps viewing with a cold beer and family can help put it into perspective.

“The Tender Bar” will release in limited theaters on December 17 before streaming on Prime Video beginning on January 7, 2022.