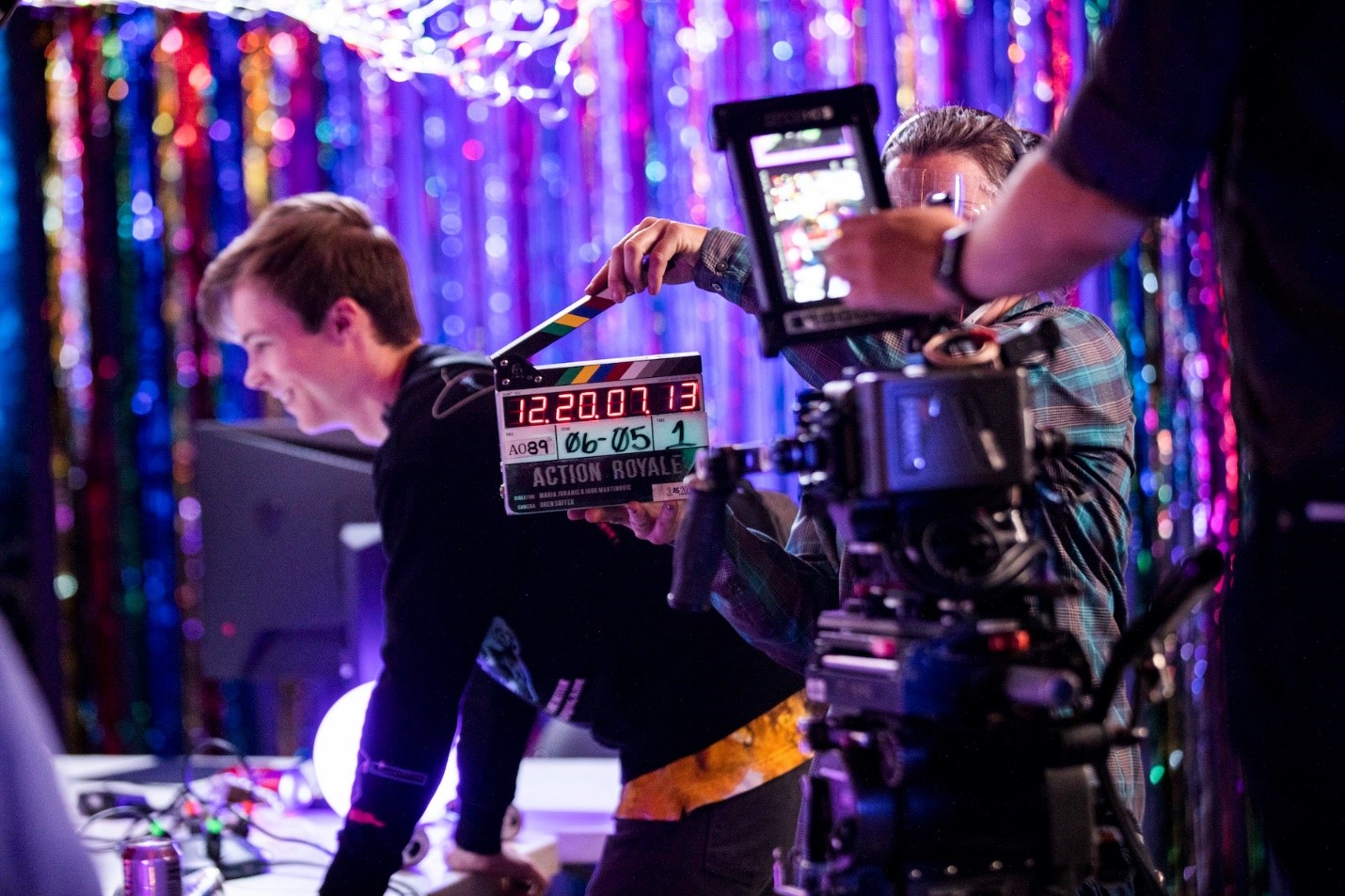 First off, congratulations on making Action Royale. This series is a fun, wild ride, hammering down on the gambling activities with video games (plus all the consequences). Do you have any fascination with gaming competition or the future of virtual gaming?

Technology is really exciting right now and the possibilities of virtual gaming especially expanding into web3 are endless. We were attracted to this for a number of reasons, but we ourselves are not gamers. We really wanted to use gaming to expose the inner turmoil of gambling, as well as engage viewers by developing empathy towards Trilby and Reggie.

Yeah, they have quite the friendship. Did the actors/actresses have fun on set getting in that gaming atmosphere?

We consciously decided not to show the games played in this show. We wanted the audience to pay attention to the characters and their emotions instead of the game itself. Haleigh Hekking (Reggie) is a really amazing gamer in real life so this helped her in developing the character. She was also our tech advisor for anything game related.

Interesting! I see this series was deployed on Snapchat, but was there ever consideration to extend the episodes beyond the six-minute mark?

We would love to if the opportunity arises, but the show was written [by Jacob Motz] specifically to fit into the mobile experience on Snapchat. Our challenge was to create narrative content on the app whose audience is known to have a low attention span; to capture their attention in the first few seconds and maintain their interest on the app and on the phone. In addition, there were no successful precedents that we could look up to for a guideline.

Right, right. I personally enjoyed all the hurdles that Nicholas Hamilton Trilby’s character experienced (from the crumbling father figure to the friendship issues to the cold-hearted presence of Jeno wanting his money on time). Did any part of his arc relate to you when filming?

We were attracted to Trilby’s character because of the complexity of his situation. His struggles to patch the single family together and provide the support to his young brother, while exacerbated by financial pressures. It is a giant responsibility for a teenager who is becoming an adult way too fast.

Yeah it’s a heavy burden to put on his shoulders, considering he’s battling the money and time aspects while trying to maintain his friend close. Speaking of her, Haleigh Hekking’s Reggie has this intense confidence when it comes to gaming, but she does indeed care about Trilby despite his continued pursuance of getting the money necessary through unorthodox measures. Would you say she offers that neutral ground/stability to his ambitions while dealing with her impending college pursuits?

In contrast to Trilby, Reggie’s character is really strong and grounded. She knows what she wants and what she is good at. Her family loves and supports her as much as they can. At a young age she decided to be the first one in her family to go to college and set an example for her younger brother, and she never wavered from this plan. Her main reason for gaming and getting involved with gambling was to help Trilby because she has deep feelings for him.

Yeah, and that relationship progresses on at a solid pace throughout the season. Were there any particular filmmakers that inspired the creation/development of this series? Throughout my first viewing, I kept thinking of an Edgar Wright/Guy Ritchie-ish stylistic (considering the quick cuts, action fast paced action montages and creative transitions).

High impact pacing was the heartbeat of the story. At crucial story moments we wanted to contrast high tempo and with slow motion and stillness.

Visual approach was multilayered. Graphics had to be bold, camera was in constant movement, frames were filled with visual flare with a goal to keep the audience excited and engaged.

“Just don’t let the money go to your head.” What a great line to include to cover the story, arcs, and even the subtlety of how the protagonist goes that route to almost resemble his father’s stance.

Exactly – the script was really well written. As the story develops the father figure role in Trilbys life starts to blur, both his real father and Jeno are major influences on him. Among many things, this story explores fatherhood and the roles fathers play in our lives.

The ending leaves the door open for a Season 2. Is that on the horizon?

We’d be all for it. We encourage everyone to watch Season 1 as it’s something we’re proud of!

I’d like to witness it [Season 1] again and will be waiting for the announcement of Season 2! Thank you, Maria and Igor, for your time.

Action Royale, Season 1, is available to view and download on Snapchat. “A teenager starts an underground esports gambling ring to pay off his father’s debts, but he and his best friend soon find themselves in over their heads in a dangerous high-stakes world.”