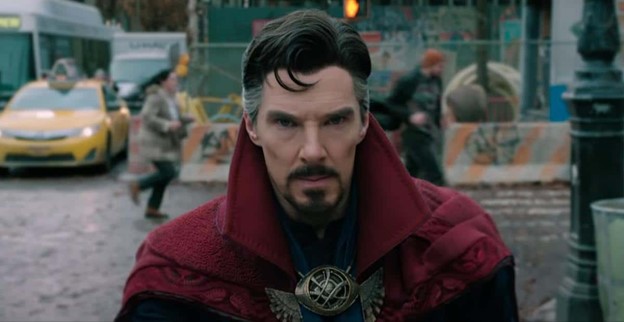 To the surprise of no one, the Marvel Cinematic Universe’s newest feature, Doctor Strange in the Multiverse of Madness, took the top spot for the weekend. It conjured up $185 million domestically and $265 million internationally, bringing its global total to a robust $450 million. That makes it the fourth-highest opening weekend of the MCU and the seventh-highest for a Marvel title.

The Sam Raimi/Michael Waldron sequel is a 117% jump from its predecessor’s $85 million debut in November 2016. Marvel treated this adventure on par with Captain America: Civil War and Iron Man 3. Benedict Cumberbatch has made several appearances between this and his first solo story that only enhanced attention to the sequel’s direction (and take on the multiverse). Depending on its legs for the next few weeks, the horror fantasy feature may end up between $900 million-1.2 billion worldwide by the time it hits Disney+.

It does not have much competition until Top Gun: Maverick on the Memorial Day weekend, so expect Doctor Strange and his multiverse pals to take control for the next two weeks.

In other news, Dreamwork’s The Bad Guys earned $9.77 million (-40%) in its third weekend. It will be on PVOD next week, but it’s still holding good form as it beat out $150 million worldwide sometime later this week. Sonic The Hedgehog 2 dropped 38% for a $169 million domestic cume, which means it will soon be dispatching F9 ($173 million) and Black Widow ($183 million) on Covid-era listings. Time will tell how close Sonic, Knuckles, and Tails will get to $200 million domestic.

Given how well these kids’ features are legging, it wouldn’t be much more shocking if they held firm for the next few weeks until they get their hands on Lightyear on June 17th.

Sadly, Warner Brothers’ Fantastic Beasts: The Secrets of Dumbledore earned $3.9 million (-52%) this weekend. The feature now has amassed $364 million worldwide on a $200 million budget, which likely indicates this movie will fail to break even, and WB might have to call off the planned fourth and fifth entries. As said before, Fantastic Beasts has continued to divide hardcore Harry Potter fans while also severing ties with the iconic eight-feature series.

Even if it lost theaters, Everything, Everywhere All at Once dropped 40% over the weekend for a $41.5 domestic total. Once it passes Hereditary ($44 million), it will be A24’s third-highest domestic earner behind Lady Bird and Uncut Gems.

Next weekend contains Universal’s Firestarter, Netflix’s Senior Year, and Orion Pictures’ On the Count of Three.