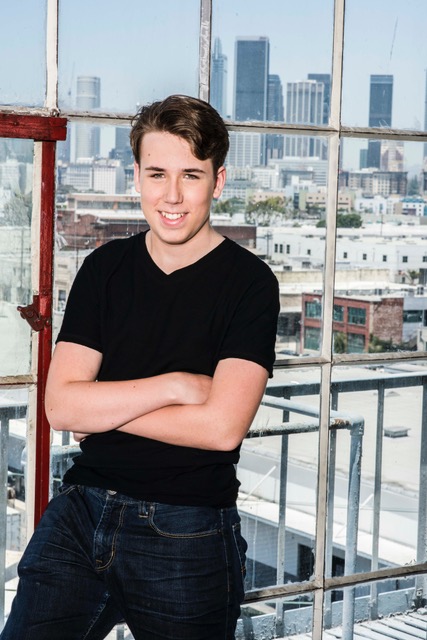 Spotlight on January 9, 2018 0Likes At The Movies
ShareTwitterFacebookInstagram

Zachary Haven is a bright star on the horizon that is already lighting up the big screen with his role of Ethan in the movie FATHER FIGURES.  He co-stars in the film with Owen Wilson, Ed Helms and Glenn Close.

When not working, Haven enjoys gaming and swordplay. He is certified for hand-to-hand combat stunts.  Recently, he lost his grandmother to Alzheimer’s and Haven devotes time to raising money for Alzheimer’s research.

“I first became interested in acting when I was about 5 years old.  I was watching a show on tv with a friend of mine and said, I want to be on the big screen.  Mom enrolled me in an acting class to see if I would really like it and I loved it. There was no turning back after that.”

How was your experience working with Glen Close and Owen Wilson?

“Glenn Close was amazing. She is such an accomplished actress and made me feel like her equal.  She also had the most adorable dog, Pip.  I would play with her in between scenes.  Owen was also great.  He was extremely focused during the shoot. However, there were times that he joked around and made me laugh!”

What can you tell me about your character in FATHER FIGURES?

“I played Ethan, the son of Peter (Ed Helms).  I was your typical edgy teen who didn’t get along with his dad.  Throughout the story, we found a way to get along. It was difficult having to play a character that didn’t like Ed Helms as he is such a likable person.  He had me in stitches the whole time we worked together.”

How important is family to you?

“Family is very important to me.  They are my life.  They have supported me through everything and I couldn’t ask for a better family.  We have had some really tough times, but we have gotten through them together. I wouldn’t be where I am today without their support and guidance!”

How does one become certified in hand to hand combat stunts?

“I took a class at Swordplay LA that offers certification in hand to hand combat as well as swordplay.  Since I am only 13, I felt the hand to hand combat would be the best class to start with.  We learn how to make it look like we are fighting one another with out actually hitting each other.  You learn how to block and accept hits as well as falling the right way.  The choreographing behind the different fight sequences can get quite complicated.  It take a lot of memorization, so you do get hit or hit your partner!”

Who is your favorite actor/actress and why?

“My favorite actor is Eddie Redmayne. His ability to play different characters to such an extent is amazing and I hope one day, I can be just as talented as he is.”

It is said that you have experienced firsthand how Alzheimer’s  affects families.  Please tell me about that experience.

“Sadly my grandmother just passed away from this horrible disease. I experienced it from the beginning of her diagnosis in 2013 to her

passing on Dec. 2 this year. My grandmother was amazing.  She was such a vibrant and loving woman.  The Alzheimer’s disease took that away.  It was difficult watching her slip away from us.  I know she hated too.  You could tell she wanted to say so many things, but they just wouldn’t come out.  I will continue to support the Alzheimer’s Organization for the rest of my life.  We must find a cure for this!”

What are your other interests?  What do you like to do when  not acting or doing charitable work?

“My favorite thing to do other than acting is playing video games. I love to be able to play with all my online friends and de-stress from this challenging business.  I also enjoy streaming on Twitch and YouTube.  I  won an Overwatch tournament at E3 this year and I wold like to be able to do more of that. I also enjoy parkour and also doing swordplay.”

How does your family celebrate the holidays?

“We are not the normal family during the holidays.  We don’t buy gifts for each other.  We spend most of our holiday season volunteering at the LA Mission and other organizations giving back to the community.  We enjoy getting to spend this time together as a family.”

You have worked in television and movies. Do you prefer one over the other and why?

“I think I really like movies better.  I feel like I make a stronger connection with the other actors.  Its also nice because you get to travel to different locations.”

“Thank you for having me and thank you all my fans for your support.  You can follow me on Twitter and Instagram @Zachary_Haven and for any gamers out there, you can watch me on Twitch and YouTube @ZLittleDude”