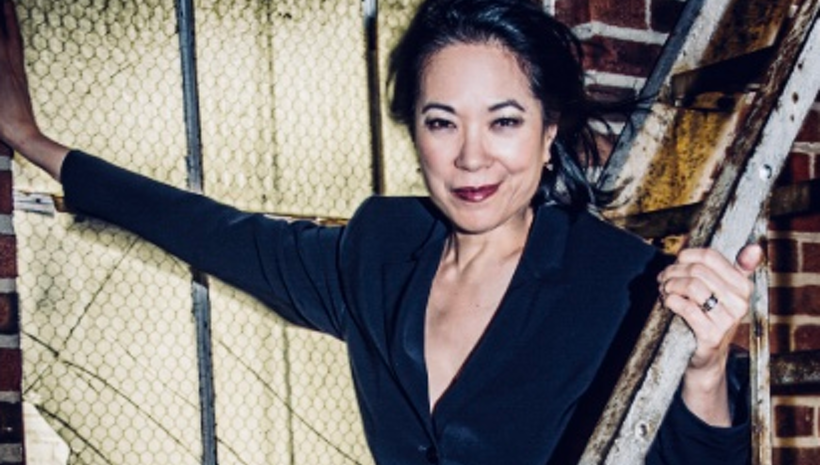 Interviews on January 3, 2019 0Likes At The Movies
ShareTwitterFacebookInstagram

Christine Toy Johnson stars in Marvel’s Iron Fist and Lifetime’s You. Christine speaks with ATM about her obligations to acting, poetry, and shooting at night on set.

ATM: Explain your technique to acting.

CTJ: Since I am a writer and an actress, I tend to approach characters from the same angle in finding out what makes them tick. What are their motivations, obstacles, and objectives? This is a very basic acting 101 thing, but this is the place to start. I then like to look at the character’s subtext, the underbelly, and motivations. What the character’s central wounds are and the things that affect them — also, the things that affect the things around them, their decisions, and actions. I also have a list of questions that I like to ask myself to get to know the character. This is both from an acting point of view and if I am creating the character. What are the things they battle to achieve? How do they evolve in their revelation, as they go through the arc of their story?

ATM: Why were most of the episodes for Marvel’s Iron Fist shot at night?

CTJ: We shot a lot at night because the exteriors in New York City were important to the storytelling. There were some times when I went for a normal television call time at 6 am. There was a time where the call time was 1 am. New York looked different, and the streets were quiet, and they could get the atmosphere they needed. The traffic is less busy in the wee hours of the morning. It is true when they say the city never sleeps. The neighborhoods were scouted out to make sure there was no traffic. The city was never completely dead. I got on set from 3 am to 4 am in the morning. There were always people out. It was easier for them to manage and get the light and the soundscape to be quieter than in the middle of the morning or even at dusk. The light and the sound would change. They would make sure the street we were shooting on was locked down.

ATM: Also express how you changed and what you learned throughout these four months?

CTJ: This was my first time working on a project for such a consecutive period of time. I have done different shows over some time, but this was more concentrated. I learned how to concentrate differently and how wonderful it was to establish this kind of family on a show. Also, how you can discover along with the writers how your character changes. When first starting to shoot in January, I did not know how my character would develop. The writers knew the arc of the story. As the story continued to shoot, we all learned different things and the elements contributed to the characters and the storyline. We all learned something new when working on the show.

ATM: What does your character say about a woman that can take charge?

CTJ: It says a lot. It says a woman can overcome whatever obstacles she has and to do what is right. Even if some mistakes might be made along the way. A woman can stick to her guns and retain her sense of what is right.

ATM: How can someone like your character give both families and work attention without making the partition between the two wider?

CTJ: Women are the multitaskers of the earth. We just figure it out. I know I feel very strongly about the importance and the ability to make priorities and that they get done. Intrinsically, I will say women are great multitaskers. It is certainly true of this character I play on Iron Fist.

ATM: As the poetry teacher to the female lead in Lifetime’s You, what are some poets that interest you?

CTJ: Oh, good question. Emily Dickinson. Her poem I dwell in Possibility “I dwell in Possibility – A fairer House than Prose –More numerous of Windows –Superior – for Doors – Of Chambers as the Cedars –Impregnable of eye –And for an everlasting Roof the Gambrels of the Sky – Of Visitors – the fairest –For Occupation – This –The spreading wide my narrow Hands To gather Paradise.” I love the idea of dwelling in possibility. There are so many times with everything in the world and life; we can as is our human nature dwell in fear and the idea of lack. I like the idea of dwelling in possibility and knowing there are infinite possibilities out there that we can take if it is intentional.

CTJ: This is right. This goes back to your question about being able to balance everything. I did not mean to be glib about us being multitaskers. I think it is true. It comes from an intentional commitment to making things happen and not being afraid of not being able to do it. But knowing you can do things you set your mind to do. You have to make space for it, but it is possible.

ATM: The fear sometimes leads you closer to accomplishing what you need to accomplish. Have you ever heard of her poem ‘Success is counted the sweetest?’

ATM: It is also a poem about Emily Dickinson, and it happens to be my favorite. She talks about a courageous army and a dying warrior. The moral of the poem is saying that only a person who has suffered true defeat can understand success. So, meaning a person who fails and fails is the only one that knows success at its finest — not the person that barely fails.

CTJ: This is certainly true. Also, the idea that you can’t appreciate what you could have until you have not had it. This probably is not what Emily Dickinson was meaning.

ATM: No, she says a line that relates to exactly what you are saying, but she says it in an Emily Dickinson way.

CTJ: I am a big believer in gratitude. Also, in acknowledging the gift that you have and the potential, you can live up to. Being mindful of this is a driving force in my life and career.

ATM: In You, at what point does his deep infatuation become an obsession and love comes out the picture?

CTJ: This is a tough question. This is probably different to everyone. The circumstances of the show are pretty unusual. I do not know how to answer this. I would hope that the love between them comes when it is mutual and when they have gotten to know each other very well in a compassionate and human way. Obsession develops when someone is focused on their lens and needs. When it is a mutual relationship, the people care about each other. Obsession seems to be one-sided.

ATM: How would you classify this deep infatuation with the lead character?

CTJ: This character Joe is sure he knows what is best for Bec. This drives him to do all of these things for her. For example, he kills one of her ex-boyfriends because he thinks he is in the way. Joe thinks he is doing the best thing for her. It is not only a feeling that he wants to be with her but a certainty that he knows what is best for her. He is what is best. He is going to remove any obstacle that will keep them away from each other. This is where I said it was one sided. He has not checked in with her to see if she wanted her ex-boyfriend dead. He just decided this would be a good thing. Once it becomes a little unbalanced, then you are tipping the realm of an obsession.