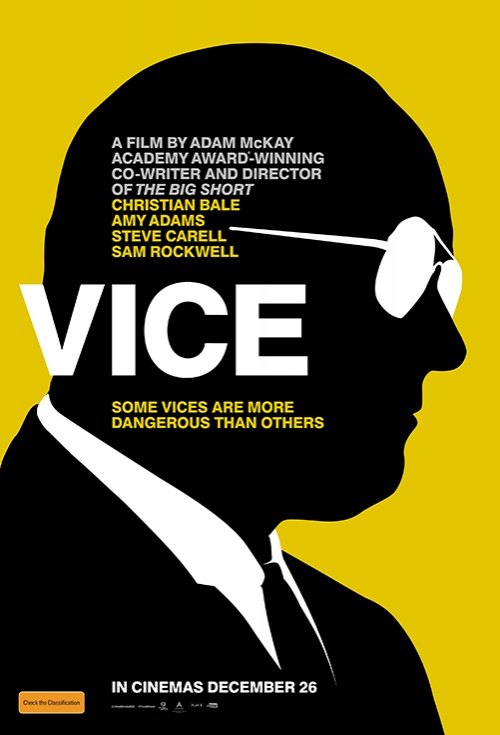 Movie Reviews on January 8, 2019 0Likes At The Movies
ShareTwitterFacebookInstagram

Told through the narration of a fictitious veteran by the name of Kurt (Plemons), we are introduced to a young Cheney (Christian Bale) in 1963, as he works as a lineman and struggles with alcoholism after he drops out of Yale University. His wife Lynne (Amy Adams) convinces Cheney to get his life together. Fast forward to 1969 and Cheney becomes an intern at the White House under Nixon’s economic advisor, Donald Rumsfeld (Steve Carell). The story then unfolds as we see Cheney progress from an intern to a successful politician in the later years.

While the film tries to add comedy, the comedy at times seems inappropriate and edgy considering this is a film that’s supposed to be a biopic about Dick Cheney. 75 percent of the film is narration from Kurt, and considering he’s a fictional character it takes away from the biographical element the film is supposed to have. There’s a lot of random visuals added in between segments that don’t seem to have anything to do with whatever subject is being discussed between characters and are just added for metaphors that are confusing to understand. The film is also very messy and all over the place from talking about Cheney’s family life and his political life. It is also extremely biased and portrays Cheney as well as other Republican figures as drunken idiots with cartoonish personalities. We all have our own opinions on how certain politicians act, but when creating a biopic it’s important to portray them in a way that’s appropriate for audiences to understand why there’s a division among people when it comes to politicians.

The film was nominated for 6 Golden Globes, and Christian Bale took home the award for Best Actor in a Motion Picture Musical or Comedy.