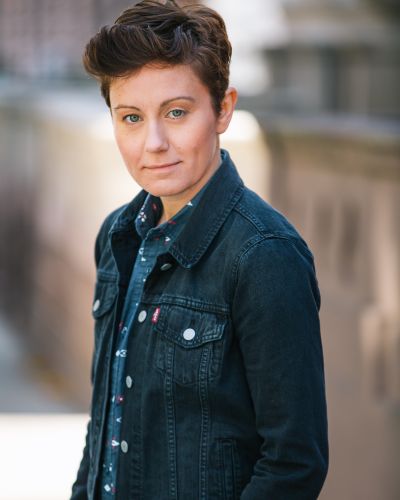 Entertainment News on January 13, 2019 0Likes At The Movies
ShareTwitterFacebookInstagram

Stacey Raymond of NBC’s New Amsterdam continues to push the boundaries for genderqueer by setting the tone with people understanding their identity is not male or female. Raymond discusses her ideas around the character she plays for one to understand what it is like living as an entertainment actor on an episodic medical drama.

ATM: What does it mean to be nonbinary with and without Webster dictionary’s definition? How do you feel it influences your work as an actor?

SR: Webster’s dictionary defines nonbinary as “relating to or being a person who identifies with or expresses a gender identity that is neither entirely male or female” Another term for this is genderqueer, which I personally like better. It sounds more fluid and less scientific to me than nonbinary. For me, being genderqueer feels like I’m a little bit of everything. My identity doesn’t feel like I’m only one gender but a combination of all energies. Being nonbinary or genderqueer means different things to different people. For example, some people who are nonbinary only use “they/them” pronouns. As for myself, I like to say that all pronouns apply. I feel flexible about it. Nothing is wrong and all pronouns roll up into my experience and identity. This sometimes means people default to “she/her” and I am okay with that because it is part of my experience, though “they/them” is appreciated. Some nonbinary people do not feel flexible about this, so it’s good to respectfully ask what someone’s preferred pronouns are if you’re not sure.

As an actor, I feel being genderqueer is an advantage. I believe it further helps me relate to many different characters throughout the spectrum of humanity in a unique way. I’m often cast in queer roles, sometimes nonbinary but most often female-identified and I’m thrilled to give voice to any of these characters. Representation matters. I am open to and excited about playing characters of any and all genders, sexualities, etc. Humanity across the board is so interesting to me and it’s such a gift as an actor to be able to share stories and reflect humanity back to itself. It’s been something I’ve wanted to do with my life ever since I was a small child and I’m very excited to see what the future will bring.

ATM: What are your thoughts on the progression of gender in society, media, film and TV?

SR: It’s exciting because the industry is evolving. Writers are now writing about ethnically diverse characters as well as queer, non-binary and trans characters. People are finally realizing these stories are incredibly important and needed in the collective narrative shared with the world. Audiences want to see themselves reflected back to themselves onscreen and onstage and sometimes on a stage or a screen is the first place a person is introduced to someone unlike themselves. This is incredibly important and powerful.

A great example is the NBC show New Amsterdam which I am fortunate be cast in the role of EMT Whitaker on. Caparelliotis Casting is doing a fantastic job of assembling actors for New Amsterdam that reflect the diversity of our world. They are reflecting New York truthfully through casting actors of a variety of ethnicities, gender expressions, etc. The writers and producers of New Amsterdam are seeking out and writing for this diversity, which is fantastic. It’s exciting and I see the industry expanding more and more in that direction. Audiences want it. And what’s great with New Amsterdam is that this diversity is not made into “a thing.” It just so happens that the EMT is queer, for example. And this is how it is in the real world. All different types of people are everywhere and why wouldn’t we want that reflected to us?

ATM: What were your thoughts on the reflection and term “gender” growing up?

SR: As a kid, I didn’t have the understanding or the terminology for how I was feeling. I remember in elementary school when things were “boys against girls” for example, I didn’t feel I quite fit on either side. I also had crushes on girls and tried to push the feelings away because I thought it was weird. I didn’t have an example of someone to look up to as a person I might grow up to be like. I didn’t know anyone who was gay or gender nonconforming on any level and there was no one on television even that I could identify with. It was in college that I was able to accept being queer and to start celebrating it.

My family was fully accepting and understanding, which I’m so grateful for. It wasn’t easy at first, but as the years go by, I get more and more comfortable in my skin. The idea that there might be a young kid out there who feels similarly to the ways I did, that can look to me and feel a little less weird or alone in the world and think, “Okay, this is someone who seems like me. I can grow up and live a normal life and be accepted” is humbling beyond words.

ATM: Take me to the pivotal moment in your life when you had a feeling expressing the phrase “I can be any gender” I am not a female or male. My gender preference is free, the sky’s the limit.”

SR: I am saying I identify with ALL genders. It’s not about being void of gender for me. It’s about encompassing all of the energies on the gender spectrum. And as an actor, I am excited to take on a wide variety of roles and all different types of characters across the spectrum without limitations – whether they be female-identified characters, nonbinary characters, etc.

There were moments here and there as I was growing up…for example, the “boys vs. girls” dynamic in elementary school…that never felt right for me. It was a culmination of moments and feelings.

ATM: What was the emotional feeling of claiming your genderqueer identity?

SR: I’ve just lived my life as truthfully and organically as possible on a day to day, moment to moment basis. And once I became aware of such words as “nonbinary” and “genderqueer,” I connected to it and was happy to have some terminology to describe how I’ve always felt since I was a child.

SR: In my opinion, love influences everyone in the same ways, regardless of how you identify. If someone thinks they need to love in a certain way because of an expectation they have placed on themselves or society has placed on them, or because of some idea they think they need to live up to base on how they were born and/or how they identify, I’d challenge them to recognize that love is an energy that doesn’t need to be controlled by outside labels. I think Lin-Manuel Miranda summed this up best when he said, “Love is Love is Love!”

Someone said let there be light and there was light