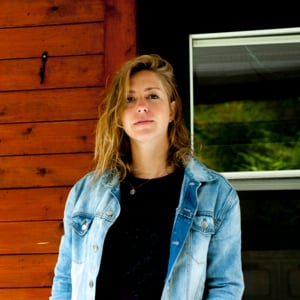 Entertainment News on May 1, 2019 0Likes At The Movies
ShareTwitterFacebookInstagram

ATM: Why did you think to talk about time and space?

S: It is a subject I am very obsessed about. I found it interesting to use them in telling the feeling when everything is separating us in life. While at your place, you do not imagine when things will happen. The only thing that is separating us from it is time. It was very easy and playful to put in the feeling that I receive often.

ATM: Are you familiar with the three basic types of matter: solid, liquid, and gas in Chemistry?

ATM: I just coined Entertainment Chemistry. In an entertainment chemistry sense, how could you observe the characters when they move as a gas?

S: They are progressing with the feelings.  This would be the gas. This is the state of the house after what happens. He comes back and it changes her feelings. She begins comes thing is weirder than she admits. There is an evolution at the end when she recommends the guest to everyone in the world. This is an evolution for the guest to do this.

ATM: Pick a scene or place where the character falls in line with moving as a solid.

S: At the end. She is stuck in her first perception. I wanted to show the day by day of living in this house. She will feel and sense something different. Now, she would begin to open her mind. She is comforting herself in what she sees. She is close to what she feels are trying to tell her. Her feelings do not change completely in her mind, but not yet the feeling in her gut. She is not able to explain the feeling in her house. She is giving them five stars and does not know what happened. She has no proof or evidence. It is hard for her to change her mind. This is the real horror story for me. She allowed the guest to repeat their days.

ATM: Where did they begin to take the form of a liquid?

S: The more we get through the film, the more you see a crack in the characters. In the end, in the hallway when she feels something is strange and she looks over her shoulders. The man is aware. They are together in this scene. This is why she feels terrified. In a liquid sense, it is merging very slowly together. The two times are merging together. If it is going this way after several months, then it could have consequences on her and her house.

ATM: Compare their emotions in the middle to the end of the movie.

S: The landlord is impressed by the guest in the middle with how they treated her environment. In the end, she wanted to close her eyes because of the feeling. This is based on space. She does not want to know. She wants to continue her life. She is a little bit scared in the back of her head. It is the same thing. She cannot say what happened. It is a feeling she gets. She will not try to get to know what happened when she was not there.

ATM: How do the main characters reflect Canadian values and social structure?

S: They try to be nice, perfect, and please everybody. They try to be liked by each other. They try to be a good host and guest. The guys are having a bottle of wine to their house. Everything is politically correct.  This is a characteristic we have.

ATM: America has a strong value of competition. It is in our nature to be competitive in every shape and form. This nature also brings on other characteristics related to our value system. Once the landlord leaves there is a sense of tension. This creates the elements with the two characters. They try to compete with one another.

S: And with also everybody in the Airbnb. She wants to make better with others and the guest. This is a naïve way and less an aggressive way. She wants to please and be better as she can be.

ATM: It is naïve to think you can please everyone. Americans are also industrious. She is working very hard out of her comfort zone to please everyone. She thinks if she goes this way everyone would be happy.

S: A lot of people are like this. It is hard to stick on what you think without being influenced by everyone around you. This is naïve to think people will like your choices or you. At this point, it is better to listen to your intuition and make your own choice. She is not realizing it, and this is sad. She is proud. There is a feeling of competition when receiving her notes from the guest. She did not see how they could receive a double fence in their comments. We see they are making fun of her, but she is not aware of this. She gave them everything and it has worked.