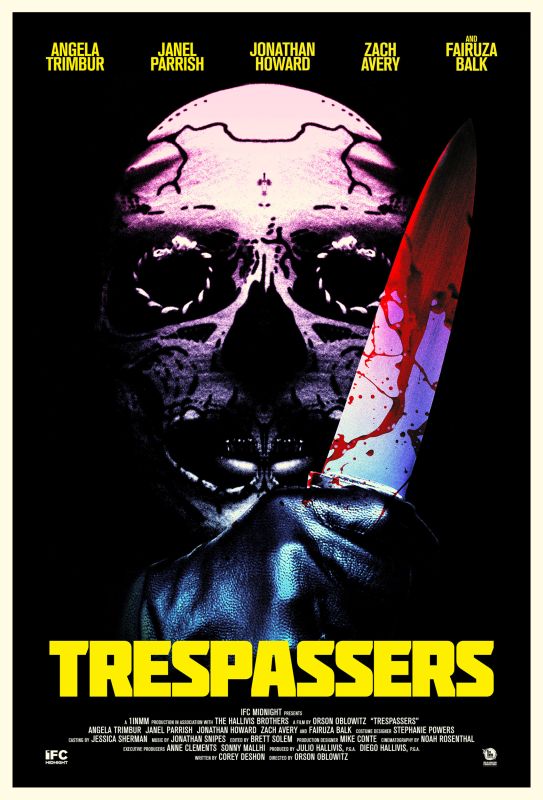 Movie Reviews on August 12, 2019 0Likes At The Movies
ShareTwitterFacebookInstagram

Tresspassers is the latest addition to the now popular home invasion genre. It has all the necessary elements of a horror film; secrets, lies, suspense, a remote setting, stupid decision making and blood.  It is a worthy film for diehard fans of horror. However, the average movie watcher may find it predictable with a slow story line that leaves the viewer somehow feeling unfulfilled.

Writer Corey Deshon attempted to cover the themes of betrayal and loneliness. The problem is that there is too much back story. A good portion of the movie is filled with explaining why the viewer should really hate most of the victims.  Deshon has too many predictable clichés including drugs and sex.

Even the horror is cliché.  The weapons are big knives and guns. The bad guys are just bad guys with no inspiring motive to capture the interest of the viewer. It also comes too late and is too short.

There are some startling surprises that save this film. The odd neighbor with car trouble is a joy and these are some of the best moments in the film.  This character should have been in the movie longer.  Viewers are never quite sure if she is just kooky or downright evil.

Director Orson Oblowitz has a background in cinematography, and it shows. He can convey the sense of isolation with a sweeping desert landscape. The interior of the house is lit in startling dark colors that lend to the sense of being penned in, especially once the horror begins.

Oblowitz is not so successful in directing the cast.  The acting isn’t awful but its’ not great, either.

It is not unusual for a horror flick to end in a way that either sets up the next movie in the franchise or makes the viewer wonder about the fate of the survivors. Trespassers has an ending that confusing and will leave viewers too bored to care.

Review: ‘Spider-Man: Into the Spider-Verse’

Dolly Parton’s CHRISTMAS ON THE SQUARE