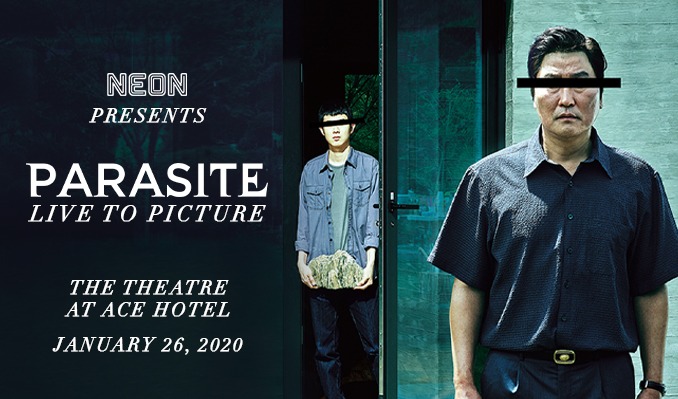 News on January 22, 2020 0Likes At The Movies
ShareTwitterFacebookInstagram

NEON is proud to present Bong Joon Ho’s six-time Oscar nominated film, PARASITE, to audiences in a one of a kind experience on Sunday, January 26th at The Theater at the Ace Hotel.  PARASITE’s composer, Jung Jaeil will conduct the Hollywood Chamber Orchestra as they play the film’s score alongside a screening of the film. Bong Joon Ho will introduce the film, which most recently earned a historic win at the SAG awards, becoming the first foreign language film to ever collect the Ensemble honor.

Bong Joon Ho’s PARASITE has been breaking records since it launched in May, most notably earning six Oscar nominations, three Golden Globe nominations and one win, and winning SAG Ensemble this past Sunday.  The film  also won the ACE Editing Award in addition to being nominated for PGA, WGA and DGA.

PARASITE recently expanded to over 800 theaters bringing in an additional 2.2mm, bringing its US cumulative box office to over 28mm.

Information about the Live Score Event and for ticketing information, please visit: https://www.axs.com/events/390840/parasite-live-to-picture-event-tickets