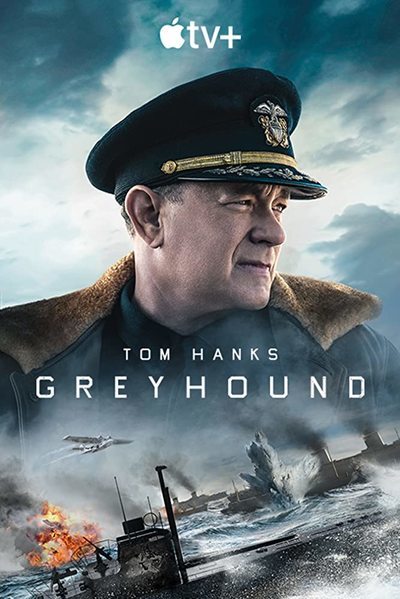 Movie Reviews on July 13, 2020 0Likes At The Movies
ShareTwitterFacebookInstagram

With the outbreak of COVID throughout the world, streaming services have overtaken theaters as the primary way to watch movies today. One of the more recent streaming services, Apple TV+, debuted in November of last year. With this release came a slew of original programming starring all sorts of celebrities in a bid to get people to subscribe. While relatively successful, Apple TV+ is still looking to secure itself in the increasingly competitive world of streaming services. Recently, Apple TV+ released the film Greyhound to stream in a continued effort to offer quality exclusive content to its subscribers.

Unlike much of the original content on Apple TV+, this film was not initially made with the intention of a streaming service release. Instead, Greyhound was made with a theatrical release in mind, but with the outbreak of the coronavirus, the film was ultimately shifted to a streaming service release. It stars Tom Hanks as Navy Commander Ernst Krause, a man charged with leading a convoy across the Atlantic at the height of World War II. As the film progresses, Krause is faced with increasingly insurmountable odds, becoming more and more surrounded by enemy ships.

The film’s biggest positive is without a doubt Hank’s performance. In the last twenty years he has mainly starred in historical dramas, and it is easy to see why in this film, as he excels in the role of a put-upon Krause. While certainly not one of his greatest of all time, Hank’s performance gives us a great view of a man who’s intelligent, capable, and forced to juggle endless challenges and obstacles all at once if he hopes to keep his convoy in one piece.

This juggling of challenges is when the action, and the film in general, truly shines. The action is at its best when comprised of Hank’s character forced to make life-or-death choices for the sake of his crew and convoy. We the audience feel overwhelmed and discombobulated just as Krause is, and the endless onslaught of problems always helps to keep the tension up.

Despite these positives the film never truly enters the pantheon of great war dramas. One of the larger problems is unfortunately the visuals. The special effects are simply not very good, and while effects are certainly not everything (and the action still benefits from its high stakes), to get the most out of action in these types of films one needs to feel convinced that what they’re seeing is authentic, and the film doesn’t always manage to do that. Greyhound is not on the level of Saving Private Ryan or Dunkirk, two films which excelled at wartime visuals. Without that the film is noticeably missing a good deal of grittiness.

The other problem plaguing this film is that not enough attention is given to the other crewmen aboard the ship. When attention is given to the characters it is often fairly well done, where we get to see how they react to the challenges at hand in organic and unique ways. Some of the crew might take the lead when presented with challenges, while others falter under the pressure, and others even seem to question Hank’s character’s authority at times, either overtly or through glances of mistrust. There without a doubt should have been more of these moments throughout the film. The audience’s connection to these characters is further hurt by the fact that, very often, the deaths of these side characters happen completely off-screen, detaching us from them even more. The film runs at a brief 91 minutes and would have benefitted from a slightly longer running time with more attention given to these side characters.

Disappointing visuals and insufficient focus on side characters keep Greyhound from being genuinely great, but it remains a decent war drama. If you are someone who enjoys war dramas, particularly those about World War II, then you could certainly do worse than Greyhound, but just prepare to be somewhat underwhelmed by the action. The film’s available on Apple TV+, which, coming with a 12-month free trial, makes for an accessible film that can be watched with any Apple device instantly.