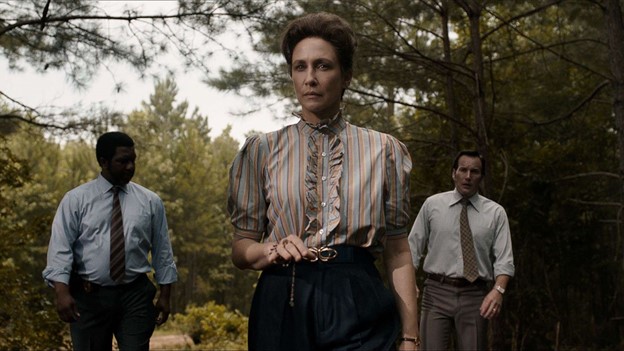 THE CONJURING: THE DEVIL MADE ME DO IT Review

The trial of Arne Cheyenne Johnson, “The Demonic Case that shocked America,” is here in the film form of The Conjuring: The Devil Made Me Do It. Ed and Lorraine Warren (played by Patrick Wilson and Vera Farmiga, respectively) are back to save the innocents and play with the devil.

Set in 1981, the two teams up with a priest and others to perform an exorcism on a young boy, David (Julian Hilliard), who lashes out with foam in the mouth and bends his body in an inhumane manner. It is a wonderfully composed ten-minute opening sequence, filled with a suspenseful atmosphere and some neat effects. The tantrum becomes too powerful, leading Ed to have a heart attack and Arne (Ruairi O’Connor) to invite the demon into his body instead.

Time has passed, and Arne is sweaty and delusional, lashing out at his landlord by stabbing him twenty-two times. He is arrested and claims not guilty by the reasoning of demonic possession. The Warrens must figure out how this demon came about and what its plans are. And what follows is an elaborate exercise in discovering Satanic rituals, hallucinations, and curses.

As someone who viewed the first two Conjuring works, this third ride-around does not reach the bar of its predecessors. Not necessarily because of the storytelling (claiming demonic possession as a reason for the murder is fascinating itself) or James Wan (who directed the first two) stepping down to a producer role, but the film lacks the inventiveness and simplicity of what made the first two so great. In the 2013 version, the startling effects came through stellar motion (recall the wardrobe scene with Bathsheba or the hide and clap moment in the basement). The 2016 sequel had some genuine, unpredictable scares from the older man and Valak demon (plus the opening is horror at its finest).

The third is a lot noisier, more predictable, and lacks the heart of its precursors. Sure, it has a beautiful production design, and some effective scares sprinkled here and there, but it becomes less of a Conjuring work and more of a typical, run-by-the-numbers horror movie. The film veers off too much from the dealings with Arne to a backstory of the Warrens marriage, Ed’s heart problems, and all these weird witchcrafts and dark tales that are relatively comprehendible at best. The storytelling does not flow at moments, and the production team must throw in scares to keep the viewers’ engagement.

Farmiga and Wilson thankfully do a superb job of holding the story together and ensure the chaos unfolding around them is fun and daring. The Conjuring: The Devil Made Me Do It is the most reflective of the franchise and the least vigorous.

It stands as eighth installment in The Conjuring universe, with two spin-offs on the way. If a fourth chapter is in the works, let us hope it can bring the product back to a state of tense-filled normalcy. Otherwise, this universe may not have much mileage left.