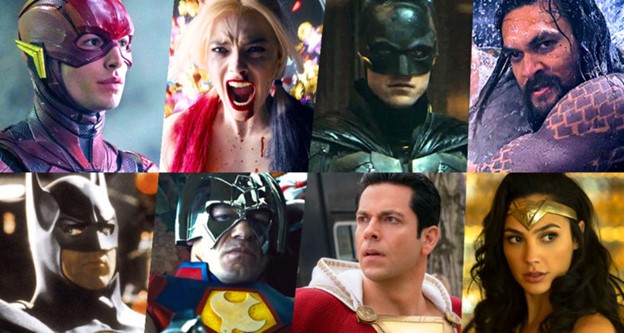 The DC Extended Universe (DCEU) has come a long way since its inception with Man of Steel in 2013. Unfortunately, in the past eight years, the franchise has experienced its fair shares of extraordinary highs (such as Wonder Woman and Shazam!) and atrocious lows (like Batman v Superman: Dawn of Justice and Suicide Squad). However, with future projects on the way and some intriguing directions for its large ensemble of superheroes/villains, Warner Brothers, and the DCEU continue to adapt and evolve and forge their path (rather than attempt to outdo the colossal success of Disney and Marvel Studios).

After diehard fans finally got Warner Brothers to release Zack Snyder’s Justice League on HBO Max on March 18th, it became evident the company is closing the door on the SnyderVerse and moving forward with other superhero films.

After the painful mess of the original Suicide Squad back in 2016, Warner Brothers stood intent on making a sequel that brings more creativity and fun. Enter James Gunn, the director of the first two Guardians of the Galaxy films. Gunn and Co. bring many new characters (and some returning ones) to a more frantic yet comedic cinema this time around. In addition, Idris Elba, John Cena, Sylvester Stallone, and many others bring freshness to the anti-hero/villain genre. Thanks to the trailers and movie posters, this remains one of the hotly anticipated films of 2021.

Gunn is winning over the company that he became allowed to write and direct a spin-off immediately following the wrap-up of The Suicide Squad. As the titular character, John Cena will get to play once again, showing off a “douchey Captain America”-like role and the series exploring his character’s origins. The series will premiere in January 2022 with eight episodes.

Many people for years wondered if Dwayne Johnson would take the role up as the anti-hero Black Adam in the DCEU. After David F. Sandberg’s Shazam!’s remarkable success, the company was ready to progress onward with a sequel and a Black Adam movie. It will become a reality now, hitting the screens in July 2022 with Johnson as the titular character, also joined by Noah Centineo, Aldis Hodge, and Pierce Brosnan. Jaume Collet-Serra (director of The Shallows and Jungle Cruise) takes the reins of helming this feature. Let us hope it delivers.

Finally, Ezra Miller will get his solo film. The film will also feature Ben Affleck (as Batman) and Michael Keaton, who reprises his role from Batman (1989) and Batman Returns (1992). The film is also set to explore the multiverse, similar to Doctor Strange’s role in the Marvel Cinematic Universe. Exciting stuff to come, and this work will release in November 2022.

AQUAMAN AND THE LOST KINGDOM

After the enormous financial success of its predecessor, James Wan, and Jason Momoa return for the sequel with Amber Heard, Patrick Wilson, Dolph Lundgren, and Yahya Abdul-Mateen II also returning. So far, there is not much news other than filming starting in late June 2021. More colorful, underwater fights and Momoa shirtless stay expected. Even if it doesn’t become as well-received as its predecessor, it’s sure to have money rolling towards its way, releasing in December 2022.

SHAZAM! FURY OF THE GODS

The first film brought lots of fun and an enthusiastic Zachary Levi. Even if it didn’t make as much as other films in the DCEU canon, it’s light-hearted and touching at times, revolving around a group of young kids messing with crazy powers. The sequel will most likely have more bonding and more action, and Sandberg will return to direct. It is releasing in June 2023.

The DCEU also has many projects on its hands, including The Batman (2022) film, Wonder Woman 3, Green Lantern Corps, a Batgirl work, and more coming at future times. It allows them to expand their movies beyond the scope of the Justice League plotlines. When those separate series perform well, team-up films will become a huge possibility, and many will become truly satisfied.

Warner Brothers and the DCEU have a long journey ahead of them, and the time and effort put into each film will determine the ultimate success of this middling franchise.