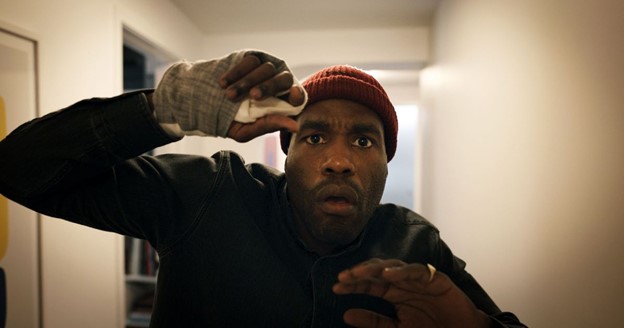 The 29-year-old spiritual sequel to the original one of the same name in 1992, Candyman invites you to say his name once more. Five times, and it ensures we’re in for an eerie, sweet ride.

Perhaps what would catch someone off-guard in the opening credits is they’re inverted, with the montage of Chicago skyline shots becoming a mirror of the opening shots in the 1992 Candyman (where the images were above the area). Director Nia DaCosta and producer Jordan Peele position this as a sequel/reboot with a good follow-up (minus the two sequels in 1995 and 1999) with some spectacular attention to detail and a story laced with social class warfare and racism themes. Interesting how the first film centered on a white female protagonist directed by a white man, but this time a black man protagonist’s journey is managed by a black female director (in a black world).

The film deals with Anthony (Yahya Abdul-Mateen II) and his girlfriend Brianna (Teyonah Parris) living in a high-rise building once part of the projects. Anthony has been struggling with his work as of late and needs to explore new themes. He becomes entranced in the tale of “Candyman” through a shadow box orchestration and then follow-ups with William Burke (Colman Domingo). The puppet scenes scattered throughout the exposition are stylish and evocative of the dark nature of the titular demon. DaCosta sucks the audience in with a cerebral approach, not something seen too often in today’s product.

Then, Anthony gets stung by a bee when exploring the projects (flashbacks of Jeff Goldblum in The Fly). He intensifies his obsession with the demon, crafting paintings that are disturbingly violent and fiendish. From there, deaths start occurring after someone says “Candyman” five times, from an art gallery owner (and his assistant) to young girls in a bathroom to the police swarming the projects.

It’s an eye-catching work, with the kills ingeniously presented in an atypical manner and the cinematography brimming with colors and shadows. Even with a runtime of 91 minutes, the film drives along smoothly and never feels bogged down by some elaborate CGI or nonsensical third-act twist (a la M. Night Shyamalan). It does its job of reminding the audience of the legend mixed up with racial violence. Not exactly subtle but rationalized.

It’s a fun, “candied” product. Probably best to avoid saying the name more than four times; otherwise, the mirror summons you to “play” with the horrific legend.