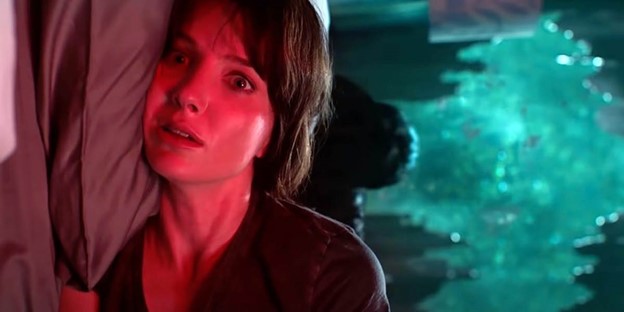 Jesus James Wan, this is a bat-s*** crazy ride in the form of Malignant.

You know, few filmmakers in today’s time journey in different, expansive directions. Jordan Peele comes to mind with his unique takes on American sins that define the past, present, and future. Wan once “tortured” his audiences with Saw, a film that developed a gnarly reputation and spawned many sequels. Insidious and The Conjuring became trafficked in frightening doors, creatures, and creepy dolls amid the night. James Wan’s name is accustomed to these old-school, gory, and (mostly) scary stories that sometimes effectively use their disturbing atmospheres.

Don’t forget; he is also the same individual who directed Furious 7, Aquaman, and will direct Aquaman and the Lost Kingdom. So, Wan is an established name in today’s line of blockbusters. Given his reputation, he is more like an evolved version of M. Night Shyamalan than a Michael Bay (which is meant to be a compliment). His latest release may develop a cult following, probably because it is exceptionally clever yet hallucinogenic. Everyone’s perspective of this will vary considerably, and it joins other polarizing horror entries like the one and only mother! film.

The film starts with an opening sequence from 1993, where an individual is wreaking havoc on the hospital, and the doctors must “cut out the cancer.” It transitions to the present day with Madison (Annabelle Wallis), a pregnant woman but wary after suffering some miscarriages before. Her abusive husband (Jake Abel) slams her head into a wall. And afterward, a mysterious entity enters Madison’s world, killing her husband and others in a gruesome fashion.

But that’s not all. Madison can witness each murder herself through psychic visions and some mentally trapped sleep positioning. She suspects it has something to do with her repressed childhood and the revisiting has her communicating with the devil, Gabriel, whose very presence threatens Madison and everyone surrounding her. Gabriel looks like a black Norwegian boogeyman, something along the lines of what creatures exist in the Alien and Species franchises. He communicates via high radio frequencies and electrical telekinesis and kills in a heartbeat (unless you’re a skillfully trained police officer).

Initially, after witnessing the first half, there was a sense of repetition with the structuring of the story. The lights dim, the electricity fizzles, and Gabriel comes around to slaughter his victim. For a moment, even this writer believed Wan had stumbled before he got the gears running. Once the second half kicks in, it becomes more intriguing (yet crazy). Wan has mastered some of the horror techniques, from the lighting and camerawork to the kills.

Yet, when the film reaches the third act, it becomes silly. No, not Batman vs. Superman silly, but it’s worth looking into (tiny hint, you most likely will get a Harry Potter and the Sorcerer’s Stone vibe from it). And feelings from The Goonies, Venom, and possibly even Stranger Things. Heck, there is even a moment that Jordan Peele’s Us popped into mind.

Yeah, the third act has a lot going for it. Wan indeed had some inspirations, but this might’ve been a little far-fetched. Still, he has more solid work stamped in the horror genre with this outing. And at least he will be commended for getting something stuck in our heads, resembling an infection.

True, infections do come and go, but Malignant is here to stay.

‘HOUSE OF GUCCI’ Review: Burning Down The House