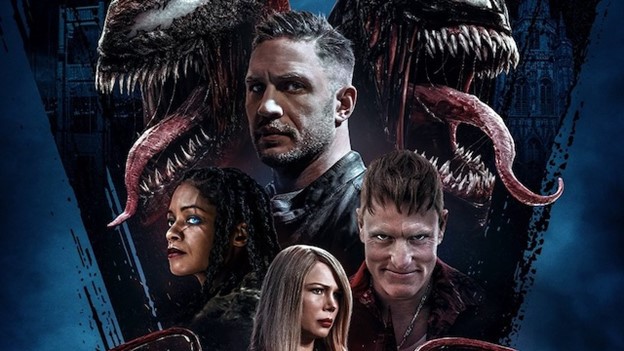 FIVE TAKEAWAYS FROM SONY’S VENOM: LET THERE BE CARNAGE

Venom: Let There Be Carnage, the 2nd film of Sony’s Spider-Man Universe and the sequel to 2018’s Venom, made a historic debut to kickstart the month of October 2021. Critics have been very up-and-down about these films (with our review here), yet, audiences still pay to see Tom Hardy’s foolish onscreen portrayal of Eddie Brock trying to live a life with the hungry, wacky alien Venom and save the world together. Director Andy Serkis upped the absurdity from the predecessor, and it made a mark. Here are five takeaways from the film. (Note: SPOILERS ahead.)

#1 Even if the critics have mediocre things to say about this franchise, audiences adore Tom Hardy, Venom, and the CGI overkill.

Let’s get a massive disclaimer out of the way: Critics do not like the Venom stories presented so far.

The main issues with them are their inconsistent tones, egregious use of CGI, and spiritless plots. As someone who has witnessed so many superhero films at this point, it’s not easy all the time to fulfill each step. Zack Snyder tried to dip his feet in levity when he kickstarted the DCEU Universe with Superman, Batman, the Justice League, and more. But his supposed “masterpiece” in the form of Batman vs. Superman: Dawn of Justice became a colossal flop because of inconsistency, a horrendous plot twist, and a painful CGI third act. Not to forget, Joss Whedon’s involvement in Justice League made the product in DC unsatisfying. Thor: The Dark World remains one of the Marvel Cinematic Universe’s low points because it utilized levity amidst a dark-toned generic atmosphere that resulted in an incoherent (and methodical) tale. And 2015’s Fantastic Four became equally soulless and tedious upon execution.

But despite its craziness, people are willingly heading to the theaters (in pandemic times) to witness Hardy and Venom bicker at each other onscreen. Their chemistry is undeniably entertaining and gives the feature some heart (even if the plot is perplexing). The sequel earned over 90 million in its opening weekend, which is the highest of the pandemic era and 12 percent more than its predecessor. The opening is also the second-best for October domestically, behind Warner Brother’s Joker. Even if there was supposed fatigue after Black Widow, The Suicide Squad, and Shang-Chi and the Legend of the Ten Rings, audiences proved they will still come to the theaters for Marvel/DC films.

Maybe people are “fine” with the utilization of CGI in these films because, after all, Venom and Co. stand as alienist creatures. And perhaps some prefer nonstop action and comedy rather than exposition and balanced storytelling. So, letting them go Michael Bay-style is something people still fancy, and it looks like that’ll return when we see Venom again in his third feature or wherever else.

#2 Tom Hardy is an underrated box-office draw, and Woody Harrelson is the guy.

Maybe there is a reason why the first made a ridiculous 854 million worldwide on a sub-100-million-dollar budget despite negative reviews. No, it wasn’t solely because of the marketing, as many know Venom is a particular villain of Spider-Man in the comics. It’s because, despite a conventional, thin story, Tom Hardy’s bonkers performance won us over. And then his outright camp and metaphorical queer relationship with the CGI Venom also was a massive bonus, meaning audiences wanted to see more of it soon.

The post-credits of the first feature also gave us a tease of Woody Harrelson playing the infamous Carnage shortly, a villain that had yet to be played onscreen in the Spider-Man realm. So, in the sequel, they marketed both Hardy and Harrelson heavily, and the film did not disappoint when it came to their time or the Venom vs. Carnage bouts (or red vs. black).

We do have to recognize also that both Hardy and Harrelson are extraordinary actors. The former played significant roles in The Dark Knight Rises, Inception, The Revenant, and Mad Max: Fury Road. Harrelson has received universal acclaim for his roles in Cheers, The Messenger, Zombieland, and True Detective. Sony was wise to have them fight at the center of this sequel, and it gave 97 minutes of everything folks loved the last time.

#3 Perhaps giving an antihero/villain a series of peculiar films wasn’t a bad idea on Sony’s part, especially if they’re related to a beloved superhero.

We must give Sony credit, folks; they were right to bet on a Venom movie. Usually, it’s rather cumbersome to ignite a franchise on the backbone of an iconic villain from the comics. The story needs to click for the character’s past/history to resonate. I mean, perhaps Venom outperformed as it became one of those “so bad it’s oddly kind of good” phenomena.

Then again, this is the same company that dealt with hacks back in December 2014 and ended the Amazing Spider-Man series with Andrew Garfield abruptly after two “decent” films. All plans for a Sinister Six, Venom, and Carnage script went down the toilet as Sony partnered with Disney and Marvel Studios after. Now that Sony has created its universe, it plans to usher out Morbius next year, with Jared Leto starring and Kraven the Hunter in 2023. Risky moves, but we’ll see if they pay off as Venom did.

In this case, folks drove to the theaters in 2018 because they desired to see a Marvel antihero, the inevitable crossover with Spider-Man, and Tom Hardy shine in his new role. The sequel doubled down on those factors, introduced Carnage and Shriek, and invested in a juvenile palette (aligning with Marvel Studios’ formula). Thus, it’s a win.

#4 The superhero genre is once again the winner of the 2021 box office.

Ever since The Avengers stormed the theaters in 2012, superhero cinema has stood as bankable. Avengers: Age of Ultron, Captain America: Civil War, Avengers: Infinity War, Black Panther, Avengers: Endgame, and Spider-Man: Far From Home affirmed this.

This year, Black Widow stood firm in theaters, and on Disney+, The Suicide Squad became the third-most watched feature on HBO Max, and Shang-Chi and the Legend of the Rings crossed over 200 million domestically (a pandemic record). Venom 2 got its chance to shine, and now Eternals and Spider-Man: No Way Home will wrap out the year for the last two months. The latter is primed to make big bucks and could break 1 billion dollars this year.

Even in a year where Zack Snyder finally got to present his cut of Justice League, the genre will continue advancing.

Yes, the movie itself could have been better, but everyone lost it once the post-credits rolled around. It is the one thing everyone will agree on that made those 97 minutes watchable, and it will now create suspense and possibilities for all.

So, after Eddie Brock and Venom kill their foes, they head on the run. They are in a hotel room where suddenly a bright light transports them to another room where they witness Spider-Man’s (played by Tom Holland) identity revealed on TV to the world. Venom remarks that Spidey looks tasty. To anyone immediately recognizing, it’s a direct fallout scene from Spider-Man: Far From Home and will be addressed in No Way Home (with the multiverse aspect at hand for the future).

This fascinating scene potentially means is that Doctor Strange’s spell (from the No Way Home trailer here) may have put Eddie Brock and Venom in the Marvel Cinematic Universe. If that is proven true, this crossover has the potential to break the internet for better or worse. And it showcases that Spider-Man now remains at the forefront for both Disney and Sony.

We already have proof that Alfred Molina is returning as Doctor Octopus from Sam Raimi’s Spider-Man 2, and Jamie Foxx is returning as Electro from The Amazing Spider-Man 2. So, adding Tom Hardy and Venom would be another cherry on top of Spider-Man’s upcoming adventures. Alas, it’s an unforgettable moment in a franchise desperately needing a stronger attachment to the iconic superhero. If done correctly, everyone benefits.

Disney, Sony, Spider-Man, and even the Avengers all take the brass rings for now.

At least until the Fantastic Four reboot and Galactus come about to shake up the Marvel Universe.