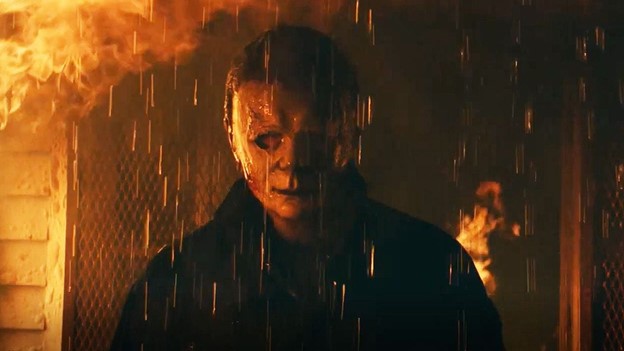 It doesn’t take rocket science to understand that when announcing a trilogy to the public for the next wave of Halloween films, the studios (Universal Pictures in this case) must deliver on that promise. So, three films, with the first building anticipation and the last supposedly the best? The second necessitates a viewing, right? It worked for The Godfather Part II. It worked for Terminator 2: Judgement Day. X-Men 2, Spider-Man 2, Mad Max 2, Superman II, and more join this noteworthy club.

Not Halloween Kills, and it’s somewhat embarrassing how indolent this feature is.

Perhaps it is Universal’s mishap that most, if not all, suspense for this film became killed after some were aware of a third feature, Halloween Ends, which is coming out in October 2022. I mean, you cannot precisely run this franchise without Michael Myers. That’s like trying to run Grey’s Anatomy without Meredith Grey. “Evil dies tonight” runs the mantra in the marketing for the Haddonfield folk, but part three confirms this line is baseless.

The story picks up minutes after the surprisingly good 2018 Halloween reboot that wiped the slate clean after atrocious sequels to the 1978 classic. Laurie (Jamie Lee Curtis), Karen (Judy Greer), and Allyson (Andi Matichak) are heading to the hospital after they believed to have killed Michael Myers (James Jude Courtney) and left him for dead in a burning house. Of course, he lives and then kills 11 firefighters nonchalantly (strangely, they do almost nothing when they see him). So, Myers is back on a bloodbath rampage, and the town becomes haunted again.

Unwilling to let history repeat itself as it did four decades earlier, the town decides to take matters into their hands (not entirely spoilers, it doesn’t work). Yes, this work does have some added layers of the mythology regarding the story of Michael Myers, from supporting players’ backstories to some returning characters. The continuity is one big plus this series has worked for it.

But still, we’re not quite here for that. Audiences want kills. They’ll get them here, and some are innovative. Others will make you question why this is a horror film since they have time to crack humor in between. The whole “checking a door out in the background” shtick continues to get watered down and, in this case, it’s sanguinary overkill.

Also, the “one person goes at it alone against a demon thing” is preposterously annoying. It happens here, So. Many. Times. If there is a definition for the word “filler” hanging around, now is the time to use it. Cynical might be a better word.

Halloween Kills does everything that a sequel should not be doing. It amasses a numerous body count with no rhyme or reason. Curtis hangs around in a hospital for the whole runtime. New characters become forgotten thanks to razor-sharp blades slashed into their skin.

And the sad irony is that all those features mentioned in that beautiful sequel club above ended up with a follow-up (aka the third chapter) that nearly demolished the franchise’s reputation. Find someone who can tell you that The Godfather Part III or Superman III was “good” (spoilers, they most likely will tell you about the opposite in a heartbeat). So, Halloween Ends next year may feel like a lost cause already unless director David Gordon Green can wow us.

If nostalgia is your thing, you probably will enjoy this feature. Otherwise, the only thing Halloween Kills does is kill time and novelty.

ATTACKED FROM ALL ANGLES REVIEW