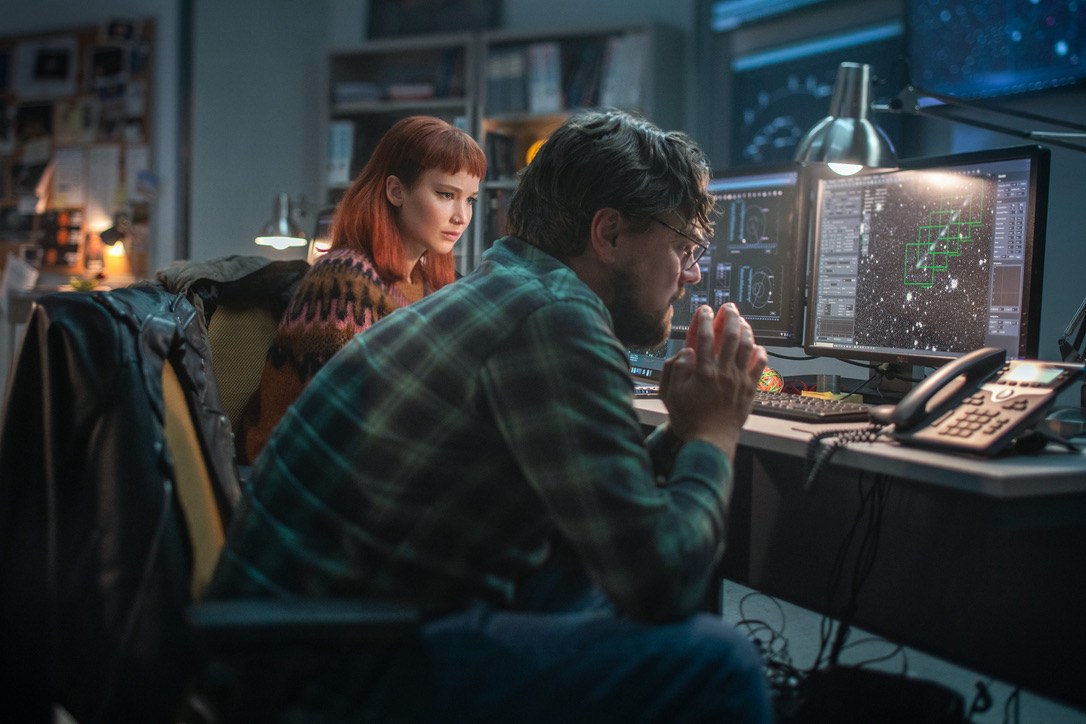 Movie Reviews on December 7, 2021 0Likes At The Movies
ShareTwitterFacebookInstagram

Okay, maybe not meteor tour, but Leonardo DiCaprio and Jennifer Lawrence star as astronomers that must warn the world — filled with political ineptitude — of an incoming comet that will destroy Earth. They are two of the only people who believe in this crisis, a crisis comparable to that of “Star Wars: Rogue One” but funny. “Don’t Look Up” is like a modern-day “Dr. Strangelove,” but with the wit and charm in the script. Adam McKay’s hilarious, and the very timely script is one of the best and funniest films of the year, arriving just in time to sneak onto all of those pesky “Top Ten of 2021 Lists.”

Somehow, “Don’t Look Up” is able to juggle topics such as political polarization, social media, looting and rioting, mega-companies ready to take over the world (looking at you, Musk and Bezos), political ineptitude (with very clear shots aimed at a very, very recent President). It’s a satire that is effectively funny and thorough; with all aspects feeling nuanced. For example, McKay had a grasp on young stoners, including Timothee Chalamet’s character, Yule, who is another example of the actor going full camp this year (see, “The French Dispatch”) and in line with his SNL character that rapped with Pete Davidson. The only difference is that Yule is an evangelist who over his own path to God, but I digress.

The screenplay McKay wrote is sublime. It’s got Sorkin-like moments, with quick banter, a personal favorite being Jonah Hill calling Jennifer Lawrence the “Boy With The Dragon Tattoo.” But McKay’s script, unlike Sorkin’s last for “Being The Ricardos,” doesn’t feel out of place. It’s smart, and the film’s tone reflects the same high energy that the script does.

And what else can be said about Jonah Hill and Leonardo DiCaprio’s bromance? The two, in a Q&A after the screening, revealed that they lived with each other during filming. They have such chemistry that glows as much on-screen as it does off, see the video of DiCaprio sneaking up on Hill for any further proof, and it’s remarkable that they’ve only starred in one movie together (not counting Hill’s cameo in “Django: Unchained”). Hill surely benefits the most from the comedic script, but McKay’s script also reflects something Hill said in the proceeding Q&A, “I’m going to give you guys a moment to breathe before being funny again,” or something to that effect. For as funny as “Don’t Look Up” is, it’s also very serious and can be dramatic when it needs to be.

Speaking of political impotence, Meryl Streep and Jonah Hill play President Janie Orlean and Jason Orlean. It’s a mother-son duo that pulls no punches in reflecting the previous administration with Jason being an amalgamation of the sons and daughters of the last president. “Don’t Look Up” has a high potential to offend those who may have voted for that President, but that didn’t stop Taika Waititi from making “Jojo Rabbit.”

What else can be said about “Don’t Look Up” besides brilliance? At two hours and twenty-five minutes, it moves briskly and will not bore. It could have been a one-man show for Jonah Hill, but the entire ensemble works like a perfect symphony. McKay’s script is so brilliant and works so well. “Don’t Look Up” is a brilliant satire that is needed in 2021, though it pulls no punches and does go harder at one side than the other. While it’s a Netflix release (out December 24 on the streaming service), make an effort to catch “Don’t Look Up” on a big screen if it’s available in more than the NY and LA markets. The script will have audiences laughing, and there are few feelings that match the euphoric unified laughter that “Don’t Look Up” provides.

“Don’t Look Up” will release in limited theaters on December 10 and on Netflix on December 24.