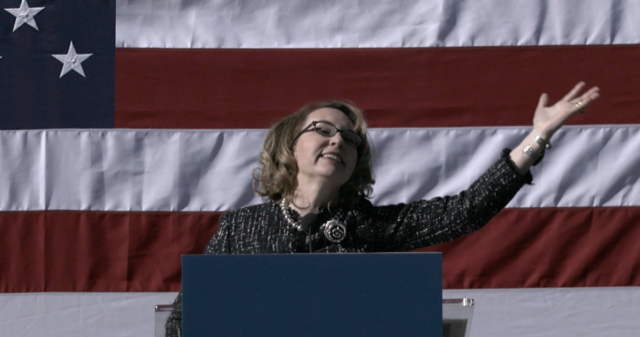 Uncategorized on January 27, 2022 0Likes At The Movies
ShareTwitterFacebookInstagram

CNN Films and TIME Studios announced today they have teamed with Academy Award-nominated and Emmy® Award-winning filmmakers Betsy West and Julie Cohen (RBG, Julia, My Name is Pauli Murray), and producers Lisa Erspamer and Sam Jinishian, for Gabby Giffords Won’t Back Down, a tender yet raw documentary about former U.S. Representative Gabrielle Giffords’ remarkable perseverance following a horrific 2011 assassination attempt that left her with partial paralysis and the language impairment, aphasia.  Home movies taken at the hospital, and current-day cinema verité filming, show Gifford’s painstaking and miraculous recovery from a gunshot to her head, and her path to becoming one of America’s most effective advocates for gun violence prevention.  The filmmakers also capture a remarkable love story.  Nine years after Giffords’ husband Mark Kelly gave up his job as a NASA astronaut to support his wife’s recovery, cameras follow an exuberant Gabrielle Giffords on the 2020 campaign trail supporting Kelly’s successful run for the U.S. Senate for Arizona.  Production of Gabby Giffords Won’t Back Down is near completion.

“Within minutes of meeting Gabby Giffords, we knew we had to make a film about this phenomenal woman,” said directors Cohen and West.  “The intelligence, humor, and toughness she brings to every personal and political challenge that comes her way makes Gabby not only an ideal documentary subject, but also a spectacular human being to spend time with,” they said of working with her for the film.

“Gabby Giffords Won’t Back Down is a triumphant portrayal of resilience, courage, and the power of the human spirit.  We could not be more thrilled to partner with the remarkable team of Betsy and Julie as they have created one of the most inspirational films of our time,” said Ian Orefice, president of TIME Studios.

On Jan. 8, 2011, U.S. Rep. Giffords was the target of an assassination attempt by a lone gunman while she was engaged in a constituency outreach event in Tucson, AZ.  Giffords was shot in the head.  In total, 13 people were wounded and six were killed, including a nine-year-old girl.

Gabby Giffords Won’t Back Down paints a detailed picture of Giffords’ journey, with new emotional interviews with former President Barack Obama, U.S. Sen. Kirsten Gillibrand, and U.S. Rep. James Clyburn, who recount Gabby Giffords’ promise as a rising star in politics prior to the shooting, the initial uncertainty about her survival, and her power as a compelling advocate for gun safety.  Still a gun owner herself, Gabby Giffords founded the gun safety organization, “Giffords,” following the Newtown, CT, shootings, and advocates at both the state and federal level for what she calls ‘common sense gun laws.’  “I’m not against guns,” she says, “I’m against gun violence.”  Along with her speech pathologist, Dr. Fabi Hirsch, she is also a leader with the nonprofit, “Friends of Aphasia.”

Cohen and West were granted unprecedented access to Gabby Giffords’ life, filming her daily rides on a customized recumbent bike, her French horn practice, and studying for an adult bat mitzvah.  Along with interviews with the couple, the film includes footage filmed by Kelly himself and interviews with Kelly’s daughters, Claudia and Claire; Gabrielle Giffords’ mother, Gloria Giffords; her surgeon, Dr. Dong Kim; her speech pathologists, Dr.Hirsch and Angie Glynn; and other survivors of the Tucson shooting.