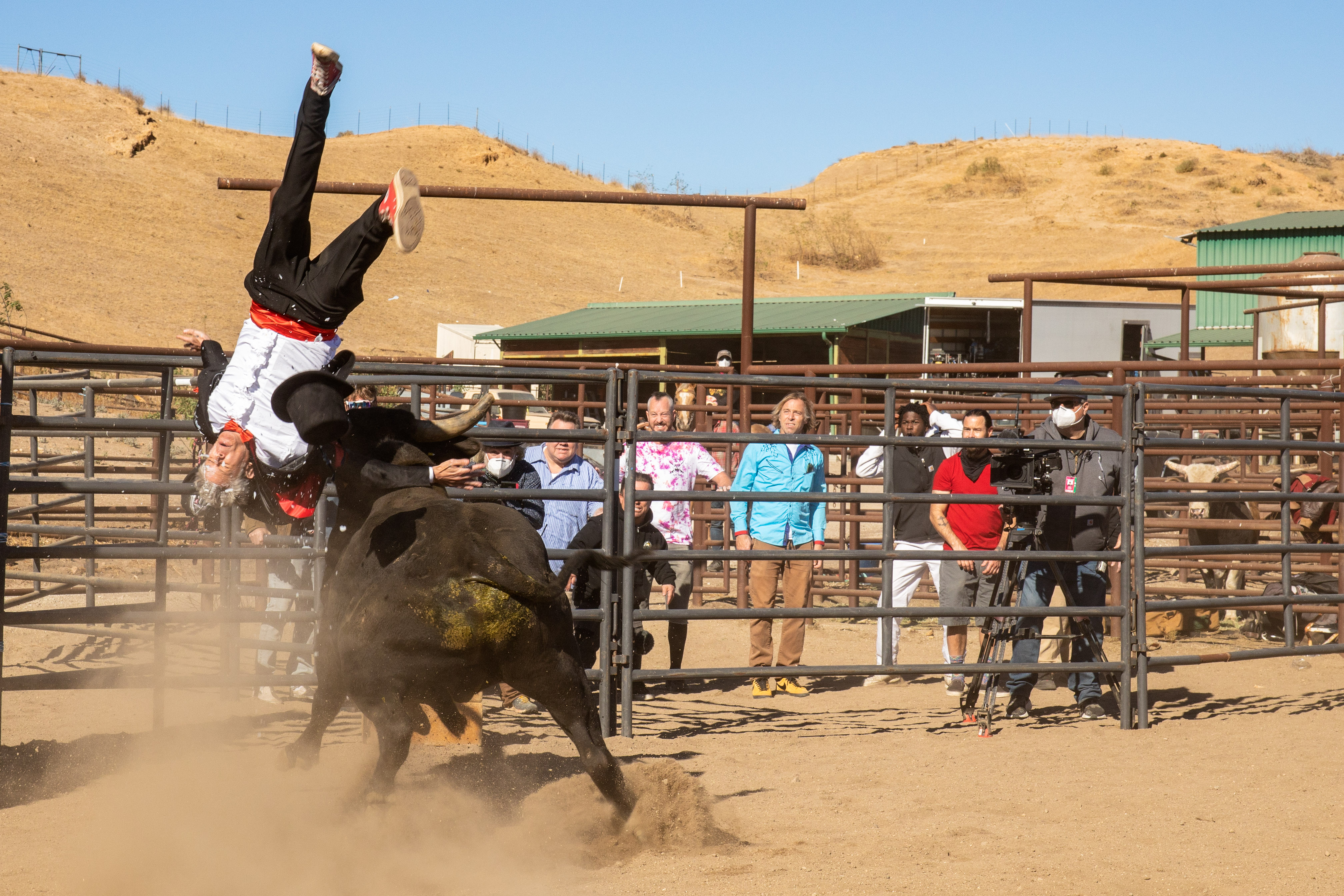 Movie Reviews on February 2, 2022 0Likes At The Movies
ShareTwitterFacebookInstagram

At long last, that damn “Jackass Forever” trailer will stop playing at your local movie theater. I don’t think I could’ve handled another few months of a man riding a bicycle into a wall whilst the rest of the group laughs like they just saw Ricky Gervais live. But, even despite the fact that the trailer has annoyed me like the little sibling that won’t stop telling you that same joke over and over, “Jackass Forever” is actually a pretty good time. Now, I’ve never seen any of the other installments in this franchise; I have distinct memories of being over my neighbor’s house as a kid as the TV show would play in the background of whatever nonsense we were doing, but I got the basic idea of how this works. So while I can’t compare “Jackass Forever” to the other installments, I can assure you that I not only laughed my ass off for more than two-thirds of the movie, that’s over one-third movie than I was expecting, I also felt so much secondhand pain that it was a rare occurrence where having a penis is a curse more than a blessing.

I don’t think the premise of “Jackass Forever” is needed, but just in case: Johnny Knoxville, aka, Colin Cowherd after one too many Mountain Dews, and his genius cast of friends are shown in vignettes that see them induce various amounts of pain to one another. In the case of “Jackass Forever,” it’s usually testicular pain. But for those that are worried about it being too vulgar, there are some “pranks,” or whatever they’re called, that induce pain to other parts of your body. Such as Machine Gun Kelly’s competition with Steve O where the loser gets hit with a giant hand into a pool, or the human ramp (which is likely exactly what you are thinking it is). Best of all, however, is Johnny’s “House of Horrors” for lack of a better term. He splits off the crew into groups of two and locks them in a room, turns out the lights, and terrorizes the living hell out of them. It may sound immature, but there’s something so profoundly entertaining about men, locked in a pitch-black room, falling into pots and pans hanging from the ceiling while being shocked, tased, etc.

But back to the testicles. Once again, I can’t tell you how the other “Jackass” movies open, but the cold open of “Jackass Forever” includes the real Godzilla v. Kong showdown that we all needed, Godzilla being someone’s you know what and the fire being, well, you can guess. It’s probably fair to say that this opening sequence will test your tolerance level, and this is likely the only time I will say that a green penis Godzilla-like monster will be the moment that you are either fully on board or leaping off.

Depending on your tolerance level, “Jackass Forever” may be the funniest juvenile 94 minutes of your life. The poor camera guy, Lance, whose name I made a point to write down as he deserves that, pukes on numerous occasions. One time was after someone’s balls were bleeding and the other was when someone actually shit their pants before the challenge even began. The spontaneity of the film is its best advantage, as who would expect someone to shit themself before doing a “Dirty Dancing” reenactment? Maybe the kid just knew they’d never top Eli Manning and Odell Beckham Jr.’s attempt from a few years back, but I digress.

To steal a rating from the great Jeremy Jahns, “Jackass Forever” is truly a great time sans alcohol. Ironically, the screening gave out shot glasses with the logo on them, but “Jackass Forever” is the perfect occasion to go to with your best friends and just enjoy some popcorn. No one was expecting the next great documentary with some strong narrative about friends. So to be clear, “Jackass Forever” is not being graded with the same criteria as an actual movie. As much of a copout as it is, how many other movies have a vignette where somebody has their balls hit by little boxing gloves for five minutes? Take that, “Death on the Nile.” But in all seriousness, “Jackass Forever” gets graded on a curve simply because the excuse that “It wasn’t trying to be art” is applicable for once. I’d do a lot of things for my best friends, but having my area below the waist swarmed by hundreds of bees is not one of them. The beauty is that unlike the guys (and the singular girl) in this crew, you never have to participate in any of these challenges. The “Jackass” crew are really at the service of us, the viewers. Thank you, Johnny, and all of your wonderful cast for “Jackass Forever.” Even if this is the “final installment,” I cannot wait for the inevitable legacy sequel, “Jackass Never Dies” twenty years down the line.

“Jackass Forever” will be released by Paramount on February 4.