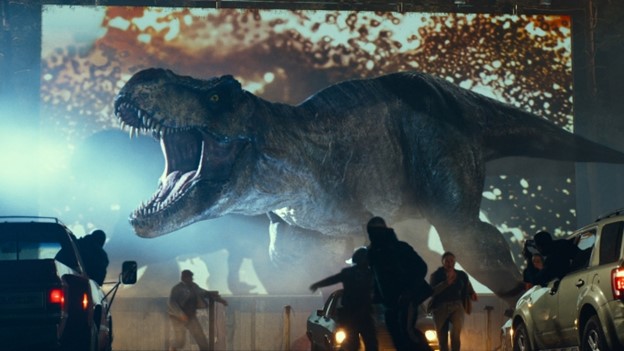 It’s almost mortifying to recognize what had followed since the inception start in 1993 when Steven Spielberg initiated a special effects/CGI revolution that left viewers in awe regarding the fanged behemoths that came to life before their eyes. So Isla Nublar felt like a dangerous paradise with roaming cloned dinosaurs fighting for survival and dominion (pun intended).

Alas, we get the titular title and finale almost thirty years later, and it comes off as maladroit and (relatively) derivative. It was difficult to tell whether we were watching X-Files, Godzilla, or Romancing the Stone. Even the setting and “tale of espionage” a la James Bond or Jason Bourne crept to mind. By the second half, the preposterous ways the main cast was avoiding deaths at the hands of these monsters was more so Universal Pictures’ attempt to retcon their Fast and Furious saga (all fun and action but stand alert that the stakes can’t get any higher due to no rational consequences). The adrenaline rush comes from the soda and popcorn, ladies and gentlemen, not the editing.

Dominion picks off four years after Fallen Kingdom, where the world is chaotic and has to accept the existence of free-roaming dinosaurs. Sorry, they don’t care about your cars, infrastructure, or livelihoods; they want to live as freely as possible. The former Velociraptor handler Owen Grady (Chris Pratt), and Jurassic World’s former manager Claire Dealing (Bryce Dallas Howard), is living in seclusion in the woods with 14-year Maisie Lockwood (Isabella Sermon). The cloned daughter of Benjamin Lockwood is struggling with freedom and identity and wishes to branch out in the world while not tied to a leash.

Then, there is still the lone Velociraptor Blue, who gave birth to a baby raptor. The inciting incident is that Blue’s child raptor and Maisie get poached by some B-thugs, who transport them to a massive bioengineering company, Biosyn. So, Claire and Owen must race to get their adopted daughter back.

While that’s going on, Biosyn’s tactics of genetically engineering dinosaurs lead to the reintroduction of the OG trio from Jurassic Park: Dr. Ellie Sattler (Laura Dern), Dr. Alan Grant (Sam Neill), and Dr. Ian Malcolm (Jeff Goldblum). They reunite at the same facility that Maisie and Blue’s child raptor get taken (shock!), and from there unfolds corporate greed, more nonsensical expositions, and dinosaur action to keep the reminders alive that they still roam as they please. The facility stands led by Dr. Lewis Dodgson (Campbell Scott), who wants to use Maisie and the raptor because their genes hold the mysteries to solving cancer and terrible diseases. But, he’s a copy and paste of every other evil corporate leader, dressing up as if Elon Musk or Steve Jobs gave him a hand-me-down.

Here’s a short spoiler of the film laid out: the real-world situation, the family falling apart, inciting event, running and screaming from a dinosaur, repeat, repeat, a quip or exposition, go back to chaotic dinosaur action, run and shout more, repeat, repeat, repeat, repeat, maybe another joke or lackadaisical love moment, more exposition, back to the action, repeat, repeat, and repeat until the movie limps to its conclusion where “humans and dinosaurs will learn to coexist.” It’s almost as if someone watched Dwayne “The Rock” Johnson and John Cena spam wrestling finishers in their WrestleMania 29 rematch (although I’d recommend watching that since the crowd still reacts favorably, it has a good redemption narrative, and it doesn’t take up 146 minutes).

Dominion does everything it can to shoot itself in the foot while trying to wrap up this series on a high note. The action was too frenetic sometimes to catch, the story remained confusing, and some of the cast didn’t even look too fond of being here. Credit to Goldblum, as he does in Thor: Ragnarok, smoothly remains the scene-stealer while Dern and Neill delight with their hidden love and chemistry. However, utilizing an extortionate runtime for meh conflicts vaguely connected to dinosaurs doesn’t make it worthwhile. And a vast array of missed opportunities became extremely prevalent as the feature trudged along (this is not even close to Endgame levels, Mr. Pratt).

A mediocre product doesn’t translate to a memorable one. But nostalgia, once again, is the tide that will turn this feature into a money-maker. If you’re okay with shoehorned references to the original Jurassic Park and small reminders about Jurassic World, then maybe it’ll work. So grab the T-Rex and Dr. Henry Wu (BD Wong) moments when you can! Watch the Jurassic Park trio reunite!

The biggest takeaway from the viewing experience is how elitists, greed, and politics are currently interfering in human lives today. It proves Dominion will become a forgotten relic once the summer season wraps up. And despite all the odds, this blockbuster will still end up in the top-ten highest-earning features once the year concludes. But, as shown with Doctor Strange in the Multiverse of Madness, blockbusters are becoming fatigued regarding the narrative beats and melodramatic moments.

Maybe it’s time to accept an “okey-dokey” experience rather than an indelible one.