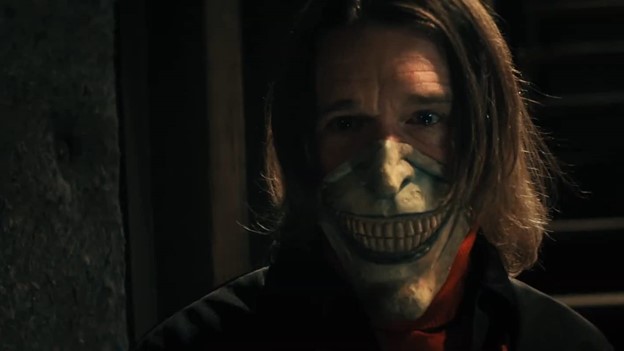 Somebody call Sam Raimi and tell him to back up the rewritten scripts of Doctor Strange in the Multiverse of Madness to the bank of Scott Derrickson because it’s time to make a more genuinely unsettling deposit. (Note: That is not an insult to Sam Raimi’s creativity, but rather the substructure he attempted to pervade in the MCU sequel with a jarring combination of fun and horror.)

In a day and age where noisy, bloated blockbusters opt for spectacle rather than substance, this one injects the uncanny into a more relatable and understandable terror: the serial killer. Remember in the late 20th century, when folks disappeared or met death due to a down-to-earth psychopath? Jeffrey Dahmer, John Wayne Gacy, and David Berkowitz all fit the bill for nightmares that ushered in dread and horror around these times. Instantly, writer C. Robert Cargill and Derrickson have source material, alongside the inspiration from the Joe Hill novel itself, rooted in the blood-curdling realities stamped into history books and folks’ memories.

In this feature, the story takes place in suburban Colorado in 1978, where five children go missing at the hands of a maniac dubbed “The Grabber,” who disorients his victims by tossing them in a black van and dumping them in a sound-proofed basement. Missing posters pop up (ah, flashbacks to the missing ones in the delightful 2017 It feature), and police investigations are underway. We met our young protagonist Finney (Mason Thames), and he, unfortunately, becomes the sixth victim after stumbling across said serial killer. Before his capture, Finney dealt with school bullies and a drunk, resentful father, but he does have his naïve sister Gwen (Madeleine McGraw), who has psychic visions of the victims in her dreams.

After Finney is abducted, he lies in a dark basement, disoriented and unknown where he is, until a black rotary phone on the wall with severed wires rings, and voices of past victims become heard on the other side. They have warnings and advice, and it’s time for Finney to step up to escape so his corpse doesn’t end up buried six feet. Meanwhile, Gwen has visions of where her brother was taken and constantly tries to ask the Lord for assistance in finding her brother.

One exciting, intricate detail of this motion picture is that instead of rambling on about gory violence (even when there is some), it takes time to vibrate with the implication and threat of the setting. That comes from Ethan Hawke’s unique take on “The Grabber.” Although Hawke stays masked for 95% of the feature, the quiet malice on his character’s controlling and deranged demeanor builds tension effectively. And the dynamic between Hawke and Thames reaches an odd optimism, like something out of Peter and the Wolf. But it’s the victims’ roll call that tries to give Finney hope in the remnants of the dark, bloody basement. The supernatural stuff might be a turnoff for some, but we’re already dealing with a sibling that has second sight, so chances are audiences will proceed to go with the flow.

The film also feels somewhat nostalgic, ringing with ‘70s colors and soundtracks. The opening montage credits were a treat, interlacing the suburban youth’s everyday activities with bloody photos and missing person posters to a spine-tingling beat. Kudos to Derrickson for taking advantage and forging along with the balance of calm and violence throughout the runtime.

Sadly, it does feel slightly offsetting to recognize how little depth goes into the adults of the movie and the antagonist. The kids feel more reinforced by their internal and external struggles while the adults are tossed in because the plot needs to move forward (or narratively have parallels to Antlers and 2015’s Room). And it was slightly annoying not to get insight into why this serial killer is obsessed with Finney or what his “games” are. Instead, you’d think in a horror feature where instructions stay explained over a phone; we could’ve received something a little more about the boiling insanity under The Grabber’s mask.

Nitpicks aside, this feature builds on its primitive parts in a manner that feels spooky and incredibly authentic to a time when boogeymen prowled the streets and children were not under 24/7 surveillance. The themes of innocence, violation, and strength resonate here in the coming-of-age tale. And while Hawke’s unnerving performance will be the takeaway, Thames and McGraw should not become overlooked as they are spry with glee and adolescent comedy. Thus, the film works primarily on every front.

So, go ahead and pick up The Black Phone, y’all.