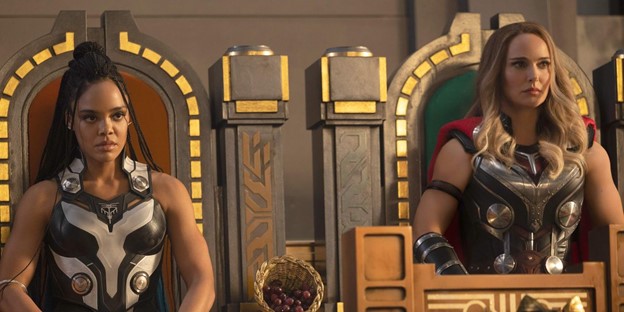 Despite it not setting the world on fire, Thor: Love and Thunder charged with a $143 million opening weekend domestically and $302 million worldwide. That is 19% ahead of its predecessor, Thor: Ragnarok, in several overseas markets and has opened everywhere except France next weekend (obviously, China and Russia are out of the mix). The opening weekend is the third-highest of 2022, behind Jurassic World Dominion’s $145 million and Doctor Strange in the Multiverse of Madness’s frontloaded $187 million. Sure, Monday afternoon might have it slip by Dominion. However, it still leaves Black Panther: Wakanda Forever and Avatar: Way of Water as the last contenders to break the opening weekend record.

Had Thor 4 kicked off the summer, it might’ve performed more like Avengers: Age of Ultron ($191 million on opening weekend). But that theory became thwarted as it pulled in middling reviews and a B+ from CinemaScore despite director Taika Waititi returning with a good chunk of the Ragnarok cast. Something was profoundly missing from engaging the audience this time; the comedic elements most likely became overkill and grazed the romance elements that were sincerely attached for the Chris Hemsworth/Natalie Portman duo this time. And it didn’t add much more than standing as another Thor sequel because audiences and critics adored Ragnarok. Ditto to Christian Bale’s dark, exuberant performance for bringing that gravitas and intriguing insight into how deities and gods may have failed humanity.

It is the only MCU series so far to attain a part four so far (outside of Avengers: Endgame), so that 17% bump for a non-Avengers sequel is not shabby. Any franchise would like to have this kind of longevity. It didn’t have the “must-see” factor compared to the recent Doctor Strange 2 episode, which was filled with Disney+ remnants of WandaVision, fun multiverse cameos, and shattering chaos as a “glorified sequel to Endgame.” We’re looking at a domestic finish between $350-405 million, but it depends on how much audiences will be okay with a rewatch. Jordan Peele’s Nope and David Leitch’s Bullet Train are the last two summer events to watch from here on out, but they don’t have that family-friendly pull. If Thor 4 pulls a final total between $750-850 million, Disney knows that is good enough. One billion dollars isn’t the benchmark for success (ask The Batman, No Time to Die, or F9).

Moving away from the MCU, Minions: The Rise of Gru took a 57% drop in weekend two for a $210 million domestic cume. The fall is on par with its predecessor, so the #GentleMinions movement didn’t break the theater chains. It should be past $400 million by the end of this sentence, meaning it’ll continue to leg out for the summer as the most prominent animated feature since Frozen 2 in 2019. It may come close to its predecessor’s domestic total of $336 million but ask again once the July month concludes.

Top Gun: Maverick finally got worn down this weekend thanks to the MCU, dropping 40% to earn $15.5 million and $598 million domestically. It’ll not only pass the $600 million mark by Tuesday, but it’ll also pass the $1.2 billion mark this week to top out Iron Man 3 ($1.215 billion). It could get close to $1.3 billion before its run comes ends, but we’ll see. Elvis also dropped 40% in its third weekend, bringing in around $155 million worldwide. The live-action musical is doing fine as one of the summer’s events movies.

Jurassic World Dominion passed $350 million domestically this weekend but will arrive on PVOD this week. However, it should still pass $900 million worldwide by the end of its run. If Colin Trevorrow and Universal had made a better product, it would’ve been making the $1 billion mark.

The Black Phone just missed the $100 million worldwide mark this weekend, so it’ll grab that milestone this week. The original R-rated horror feature continues to leg out and dutifully reminds us that a sequel should not become considered. Meanwhile, Lightyear continues to collapse and will not pass The Good Dinosaur’s $123 million domestic total. No, LGBTQ agendas were not the case; Thor 4 and Jurassic World 3 proved otherwise. Nobody asked for a spinoff of the Toy Story series, and Disney’s continued mojo of promoting Disney+ for primarily animated movies means viewers didn’t need to waste time buying tickets for an unusually “good, not great” Pixar film.

Next weekend sees the drop of Paws of Fury: The Legend of Hank.