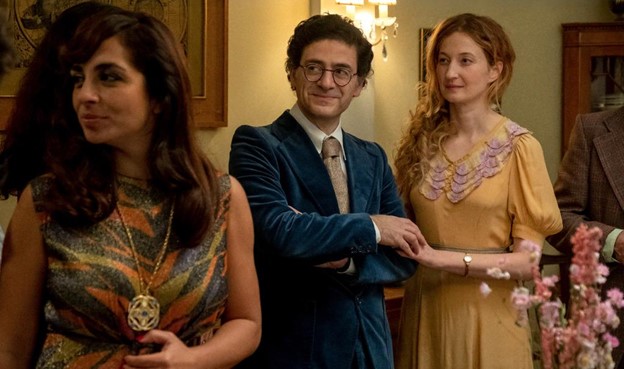 Movie Reviews on July 27, 2022 0Likes At The Movies
ShareTwitterFacebookInstagram

We’ve all seen the films where war comes and goes and its devastating effect on people, friends, and family. It’s a typical resort for constantly reminding audiences how troubling times bring disastrous consequences for the future. Thomas Ince’s Civilization brought the character of Christ to reaffirm how to remain peaceful in times of warfare. Viktor Fleming’s Gone with the Wind told a love story against the backdrop of the American Civil War/Reconstruction era. And many Japanese filmmakers, such as Akira Kurosawa and Kon Ichikawa, detailed the harkening effects of how the Japanese suffered tremendously after the nuclear attacks in the closing of WW2.

Such is a similar case in Skies of Lebanon, directed by Chloe Mazlo, which centers on a family backstage the Lebanon Civil War in the late 20th century. The unusually executed feature blends action and animation to create a compelling portrayal of the tensions and drama the family (and others) must endure.

The plot follows Alice (Alba Rohrwacher) as she leaves a repressive family in her former place in Switzerland to pursue a new life in Beirut, working as a nanny. She chooses this path after eating a letter (via great old-school animation) and heads out to the beautiful landscape of Lebanon. She falls in love with Joseph (Wajdi Mouawad), an astrophysicist that dreams of heading to space one day. Together, with some rapid transitioning, they start a family, make friends, and expand their love. Unfortunately, that story is cut short by the loud bangs and chaos of war.

The 90-minute feature doesn’t set the world on fire with its storytelling, but it feels highly poetic and colorful on the small canvas it operates. Mazlo’s throwing in of back-projection and stop-motion animation feel refreshing, and Rohrwacher’s performance remains steadfast while Mouawad provides forbearance and insecurity during the troubling times. The music and pacing keep the movie flowing nicely, and it doesn’t pull strings too much away from the drama to center on the constant barging violence on the streets. It also reminds us of the theme of re-enlightenment, as Alice needed to get away from that life to start a new journey in a country where she’s not “homebound.”

The third act does feel somewhat rushed and faltering and lacks much emotional depth to grasp that feeling of desperation and hope. As a minor feature, though, there is excellent admiration to become found through the cast and Mazlo’s direction.
The skies of Lebanon might usually come off as strife, but this feature reminds us that there is a great wonder out there.