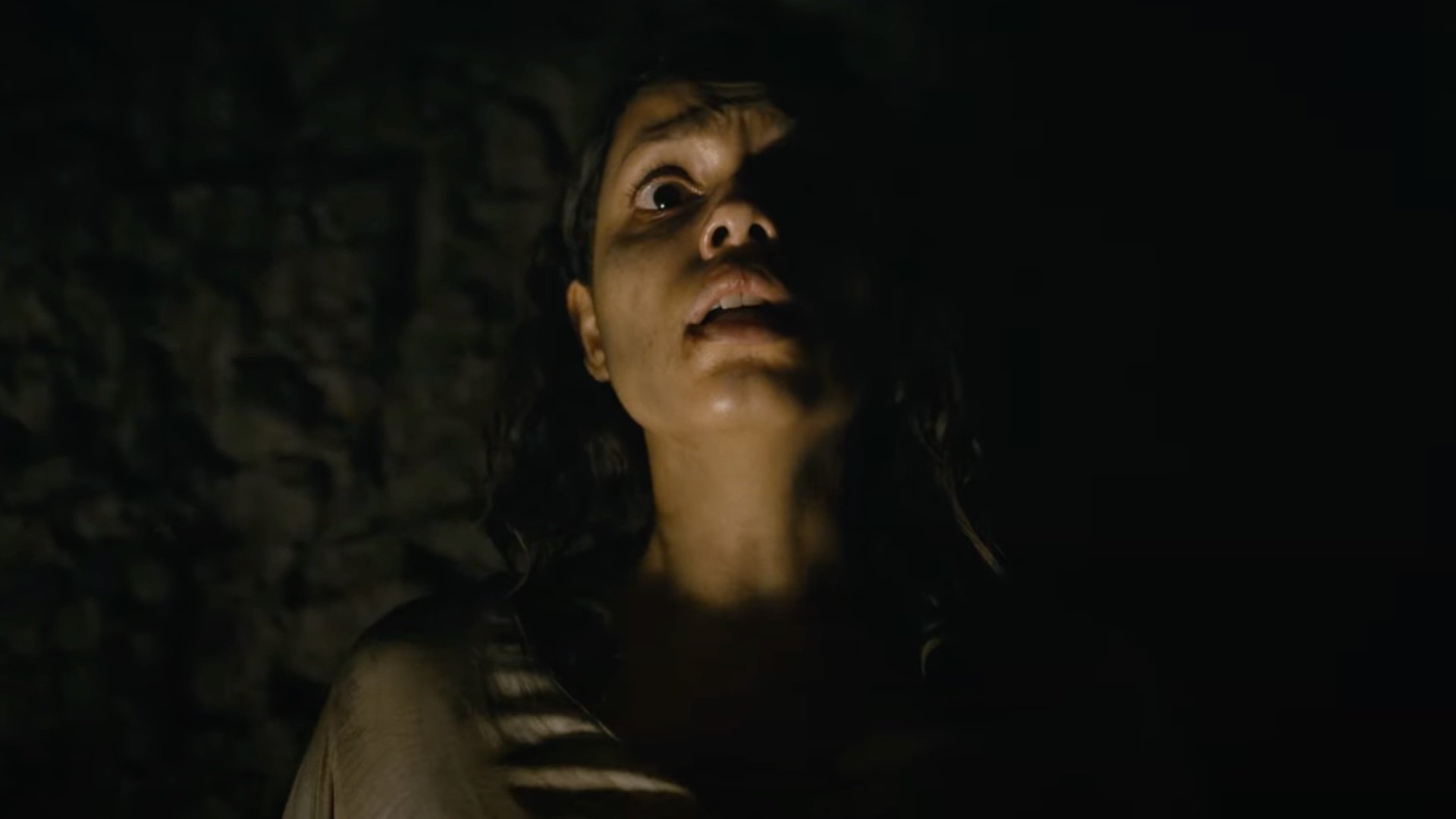 Abrasive and Hitchcockian in spirit, Barbarian seeks to up the ante for casual moviegoers and horror fans. It isn’t any funhouse our guests have stumbled upon; it’s a matter of witnessing each corner and door in a raucous architectural fashion.

This is a rather-straightforward story: Tess (Georgina Campbell) has rented a place in a dilapidated, ghastly neighborhood in Detroit. She can’t access the building at night because no keys are available, it’s pouring rain, and the owners are not picking up her calls. Suddenly, a man named Keith (Bill Skarsgard) answers the door, acknowledging that he also rented the same spot. Tess apprehensively joins Keith in the house for the night without many options. Initially, she locks each door and secures herself, but she finally warms herself to him after his hospitable gestures don’t pose much of a threat.

At night, she notices her door and another is open. She investigates the basement the next day and notices an ominous basement filled with tunnels and secret rooms. Naturally, she explores further and realizes something is wrong with this household. It would help if the listers mentioned a hidden basement underneath the house, especially considering how two folks ended up in the same place because someone couldn’t update their listings—eyeballing you, Airbnb.

Little digs aside, director Zach Cregger gives the audience many questions to ponder over as he meticulously crafts the feature. What kind of nightmare fodders occurred here, and why is the house so spooky? Cregger did his homework, looking to Alfred Hitchcock’s Psycho and utilizing Jordan Peele for inspiration. The brazen pacing throttles forward with several surprises you can’t anticipate. It is delightfully refreshing in today’s climate as many horror pics indulge in excessive exposition or scares that relieve tension. In Cregger’s tale, almost anything can happen as he swiftly zooms in on uncharacteristic aspects of the household (who puts electric toothbrushes under the sink?).

Then, we get introduced to smug AJ Gilbride (Justin Long), who gets informed by his folks that he will face sexual accusations that will harm his career. Since he needs money to pay off his upcoming counterclaims/investigations, he goes to the same house that Tess and Keith are coincidentally renting. AJ’s demeanor is extremely despicable yet ridiculously comedic. We’re there to witness his downfall in a feature that transitions to serial killer thrillers and cave-dwelling escapes from an unknown occupant. Then, the storyline gets wrapped up with an old-school flashback about the owner of the household and what kind of devilish tactics he once utilized in the setting.

The breaking-up tone does feel offsetting at times as we scramble to understand what is going on, but Cregger does give time to each dimension and character that we recognize the terrors are reminiscent of real-world affairs. No, it’s not an indictment of the #MeToo movement, but it acknowledges the traumas that will drive away those that can’t handle such topics. The darker side of society in 2022 cannot be stressed enough in his eyes.

It’s an oddity of a feature that feels very much like A24’s aggressive insight on male toxicity in Men that came out earlier this year; the only difference is this one embraces the extremism in a vicious, darkly comedic tale that serves as an antipode of contemporary horror. Barbarian unpredictably paves a (mostly) worthy horror tale of witnessing.