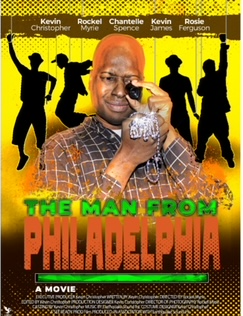 Uncategorized on November 1, 2022 0Likes At The Movies
ShareTwitterFacebookInstagram

The Man From Philadelphia is trending now on Tubi TV & Amazon US.  The film co-directed & executive produced by Kevin Herod, stars Toronto stand-up Comedian, Actor & Author, Kevin Christopher.  The Man from Philadelphia is the story of entertainment and business manager Markus Wigglesworthenstein.  Yes, that is his name.  When Markus is publicly fired and labeled a boy band con artist of a manager, his business suffers a setback.  Attempting a rebound for both his personal and career’s sake, by quarterbacking the introduction of two new musical acts as they make their debut to the world, he immediately runs into problems.

The Man From Philadelphia is an outside the box film with a unique aspect for its viewers, seeing as how Markus is the only one who speaks.  Kevin Christopher (Markus) doesn’t narrate, but instead moves the plot along via dialogue throughout the one-hour screen time, while encountering a cast of characters along the way.  To add to it all, an interesting nod to the actual city of Philadelphia in the story of The Man From Philadelphia is when Christopher as Markus artfully fits in a rendition of the 1843 American poem ‘Tell Tale Heart’ written by EDGAR ALLAN POE, composed while the poet lived in Philadelphia.