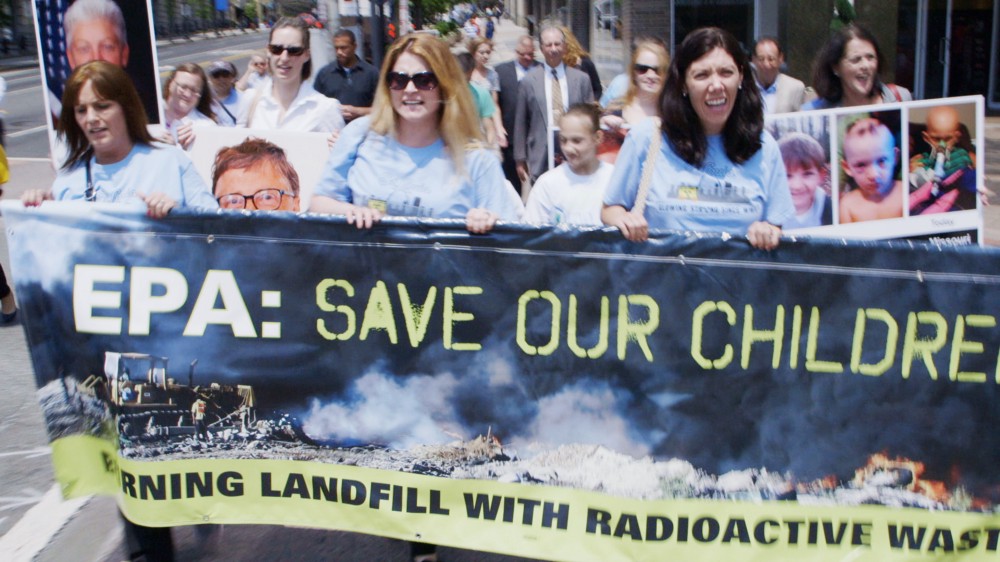 Movie Reviews on January 25, 2018 0Likes At The Movies
ShareTwitterFacebookInstagram

In 1942, the United States government chose Mallinckrodt Chemical Works in St. Louis  as the processor for the uranium needed for the newly developed atomic  weapons program. For the next 25 years the waste was  sold to the Cotter Corporation, which dried the waste and was responsible for its disposal to an approved dumping ground in Colorado.  In 1973, Cottor Corporation still had 47,000 tons of waste to dispose of. They hired a trucking company. That company illegally dumped the waste in The West Lake Landfill in North St. Louis County.

The West Lake Landfill is just 4 miles from Cold Water Creek, which meanders 14 miles through neighborhoods.  Since 1997, The Army Corps of Engineers’ FUSRAP program has been removing uranium 238, thorium 230 and radium 226, but only in the industrial zones.  Private homes, public schools and parks have not yet been tested.  Insufficient funding is partially to blame. Michelle Seger played in the creek often as a child. She now has stage three non-small cell lung cancer.

There are higher than average rates of cancers, birth defects and other diseases in the area. Recent EPA testing shows that radiation has traveled outside of the West Lake Landfill perimeter. Tests revealed dangerous levels of thorium 230 inside the home of Robbin and Mike Dailey.

To make matters worse, a subsurface fire is moving close to the 47.000 tons of waste. The Daileys have joined Dawn Chapman and other mothers in the area to form Just Moms STL, a group that educates and advocates for government resolution.  The documentary follows Just Moms STL as they travel to Washington, DC  to protest and meet with the EPA.

The residents want a government buyout of their property and relocation. The EPA has said it will build a retaining wall to stop the fire from spreading. At production time, no resolution or wall, have come about.

“Fire Walk With Me” Paints a Suburban Nightmare