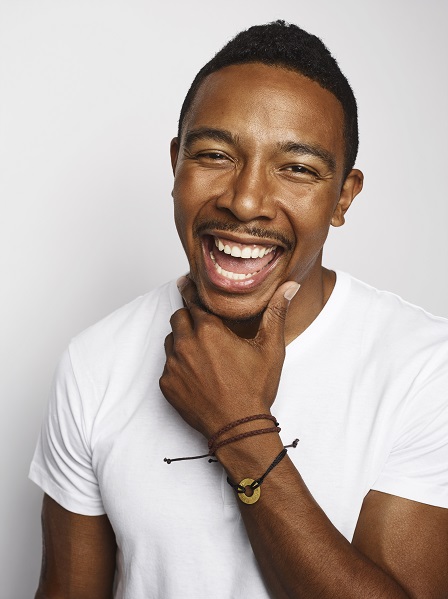 Entertainment News on May 18, 2018 0Likes At The Movies
ShareTwitterFacebookInstagram

Allen Maldonado is no stranger to the entertainment industry. He currently writers for and co-stars on the TBS hit comedy series The Last O.G. starring Tracy Morgan and Tiffany Haddish. The California native has played on a numerous amount of other films and television shows such as The Equalizer, NCIS, Rosewood, Ringside, Dope, The Ugly Truth, Judging Amy, Straight Outta Compton, Young and the Restless, and many others. He finished his full television writing career for Lebron James’ past Starz series Survivor’s Remorse and he also played on ABC’s award-winning hit show Black-ish. Maldonado talked with ATM about his role as Bobby on The Last O.G and other upcoming roles.

ATM: Why did you choose the hue of blue for your hair as Bobby on The Last O.G.?

AM: Originally it was supposed to be blue, but it is a blueish green, but I wanted it to be electric blue. It did not come out the way I wanted it to. I ended up really liking it. Bobby is a newer version of what Tray was back in the day. He is more of a millennial version of Tray. Tray had the classic 2000 look with the cornrows or gangster rapper appearance. We are going into this world of

new gentrified millennials. I wanted him to have a favor of millennials. He is a street hustler, but I did not want to make him a menacing character because he is a funny and goofy guy. This lightened up my appearance overall.

ATM: Yes, Bobby is very hilarious. My favorite scene was when Tracy Morgan’s character Tray and Tiffany Haddish character Shannon are arguing outside on the night of her event. Your character Bobby speeds up in the car and keeps elevating the music as Tray is saying turn it down. Bobby hits a white couple as he drives off.

AM: That was a funny scene (chuckles).

ATM: How did you approach your character, Bobby?

AM: At nine years old, I would come out to New York frequently during the summer. I remembered Harlem stereotypes used to be in the people I would see. They were very funny and energetic. Even if they hung on the block, held their Pitbull, and robbed people they were still characters. Through these menacing acts, they were so funny. I pulled from a lot of people in Harlem to embody my character body.

ATM: Did you grow up with your father?

AM: No, my father passed before I got a chance to know him.

ATM: I asked this question because The Last O.G discusses the father-son dynamics, themes, and stereotypes in America. After being in prison for 15 years, Tray wants to get to know his children, but Shannon does not want him in his children’s lives because of his past. She withholds this gracious chance away from him. Describe why you think a father-son relationship influences a male.

AM: It is impactful whether your father is a positive or negative influence on you. It is our example of what you should be and how you should operate in life. If you do not have a father that is laying the blueprint of how you should or how a real man is, then you could be led to stray. Sometimes it is the pros and cons. Anyone in your life should be directing you in the right director whether it is your mother, father, uncle, best friend, or teacher. If not, then you can find yourself in not so good situations.

ATM: What is your perspective on the show?

AM: It is a show about taking chances. The individual that is trying to make the best out of his situation knowing that he lost 15 years.

Tray not only lost 15 years with his kids but with his own life. He is trying to catch up with his personal life, kids, and cousin Bobby. All these things are a second chance to get getting right.

ATM: The problem I have with society is that a lot of males are still held in bondage by society. In this case, black males get out of prison and are released back into society only to be still held as an inmate to society. This makes it hard for someone like Tray to get a job. Blind to the constructions of society, Tray got out of jail oblivious to how it was for an ex-felony.

AM: Yes. There are a lot of individuals coming out of the prison systems feeling that prison was a place for rehabilitation. However, when these individuals get out after being rehabilitated it becomes so difficult for them to reposition themselves in society because of their felonies. It forces the person into the thing that got them arrested. It is very systematic about how difficult it is for a felony that has been in prison to get back on the right track without going through the obstacles. It takes a special individual to overcome these obstacles.

Maldonado plays a very funny character on the hit comedy series. Morgan is a part of how Maldonado’s character Bobby comes to life.  The show was recently renewed for season two. Maldonado currently is co-starring as Litty in Director X’s Superfly along with an A-list cast this summer. You can catch more of Maldonado on The Last O.G. Tuesday nights on TBS. Check local listings for the time.