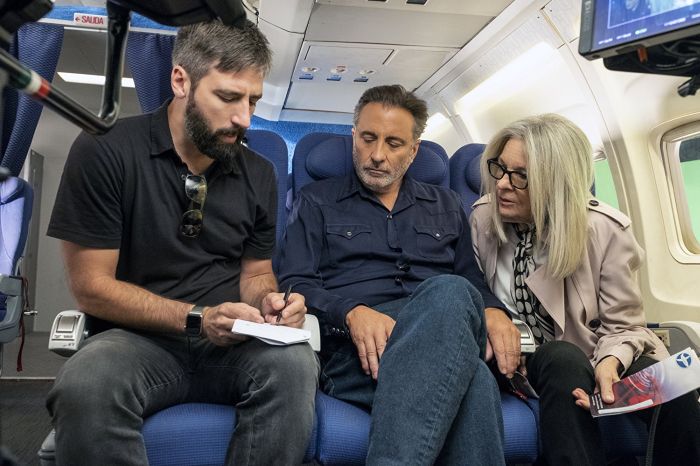 Reel 2 Real on May 18, 2018 0Likes At The Movies
ShareTwitterFacebookInstagram

Bill Holderman has written and produced many feature films. Book Club starring Diane Keaton marks his directorial debut in Hollywood. Book Club also stars Jane Fonda, Candice Bergen, and Mary Steenburgen. The Chicago native has worked on past films such as The Conspirator (2010), The Company You Keep (2012), A Walk in the Woods (2015).  Holderman talks with ATM about his first directorial debut, pre-production, and describes his experience working with his star-studded cast.

ATM: Walk us through the casting process.

BH: It started with Diane Keaton. We had written a script specifically for her. Diane’s name in the script was Diane and, in the movie, it is still Diane. We sent the script to Keaton’s agent, got her agent on board, met with Diane to read the script, and this got the ball rolling. Once you have Diane in your movie, it becomes a lot easier to send a script out starring Diane Keaton. This was the first piece of the puzzle with putting everything together. In addition, the original draft for Jane Fonda’s character in the script was Jane.

ATM: Explain how it felt working with the cast of the Book Club.

BH: Everything you expect and imagine. You have the idea of these actors in the movie from having such a long relationship with their onscreen personas and offscreen personas from their interviews as a fan. They were all even more impressive than I thought. I had pretty high expectations for each of them. Diane has written a couple of design books and has a strong sense of style. She has one of the greatest best design eyes ever encountered. Diane is very smart, savvy, and inspirational. I can talk about each of them in the same way, they were very impressive to work with.

ATM: Why do you think this film has already been considered “the must-see comedy for the summer?”

BH: Hopefully, because it is funny. This film was shot in 33 days with a very tight budget. The reality is everyone that came on board both cast and crew were there because they were excited about the movie. Additionally, you could see this same energy from our four leading women. They had a really good time and fun making the movie. This fun translated to the audience. This type of movie does not get made very often. Hopefully, people walk out with a bigger smile than when they came in.

ATM: What did you learn from directing this film that could possibly help you on a future film project?

BH: I learned to have a lot less sleep. After we casted the four women, we bought them in to cast the men. They have been in the business so long and have so many onscreen pairings. These dynamics felt very real and you could feel the good chemistry through the actors. This is something I would repeat. We asked the women who they wanted to act opposite of. For Diane, Andy Garcia was her number one choice and to me Diane was between the two.

This was a huge blessing. This is true for Don Johnson and Jane Fonda who have been friends with over 40 years. These are two people who I did not imagine to be friends. I found out they were genuine friends when she bought up his name. Richard Dreyfuss and Candice Bergen were the same. Also, Mary and Craig worked together previously on the Proposal, so to see these two together for the second time was great. All the positive energy the actors had with their co-stars really helped to translate to the audience’s

interpretations of their relationships. I hope to replicate this great lesson.

ATM: Tell us three of your favorite scenes in the Book Club.

BH: One, I loved the dance number between Craig and Mary. This scene was really special, and they worked very harder on it. It comes at a point in the movie where there is a nice climax. This dance scene holds a dear place in my heart.

Two, there is a scene with Diane and Andy on a swan.  They are floating on top of the swan. Just to have the opportunity for Diane Keaton floating on a swan holds a special place.

Three, there is a scene with Jane Fonda and Don Johnson are in a diner. In this certain scene, these actors breathed so much life into the scripted words. They were doing things more than what was expected. They bought honesty and realness to their characters. These scenes will always be treasured in my experience.

ATM: How did you keep your emotional feel to the film separate from your job?

BH: That’s a good question. The schedule was so tight you do not have time but do your job with getting coverage. All the joy and appreciation with the cast’s trust in me with this process was something that I checked at the door. They had expectations of me and we all had a job to do. They had a tremendous amount of respect for the material.

ATM: How did you stray away from being starstruck while directing this film with such an A-list cast?

BH: This is a very good question. I had to convince them to be in this movie because I was a first time director. This took having meetings with each of them separately. They leveled the plain field after sitting down with them and convincing them to do the movie. You become on the same level as them once they get in your movie.

ATM: Are you working on any additional film projects?

BH: Not yet. I just finished this movie a couple of weeks ago. There are things being discussed but I have not figured it out yet. I want to finish this one and get it out. It is hard to think about anything else when I am mostly focused on this film.

Holderman brings to light a cast of experienced women in the Hollywood who have captured our attention for many years. In this film, we see a side of these actors that is different from their onscreen roles in prior films. This movie deepens a fans history and relationship with them. Book Club captured experiences that can help an individual get over hurdles in their daily life.