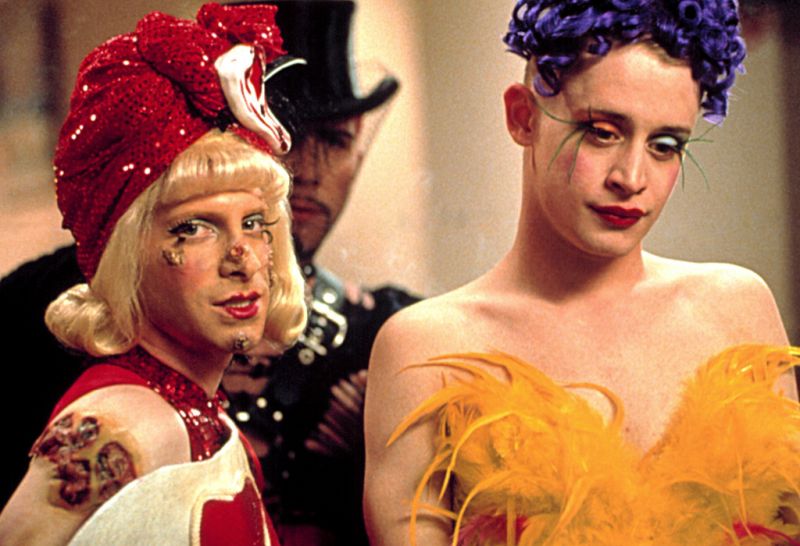 Movie Reviews on June 25, 2018 0Likes At The Movies
ShareTwitterFacebookInstagram

What do Macaulay Culkin, Seth Green, Marilyn Manson, Dylan McDermott, Chloë Sevigny, Wilmer Valderrama, Natasha Lyonne and John Stamos all have in common? They all starred in 2003’s decadent, drug-fueled gay crime drama biopic, “Party Monster,” that is filled to the brim with glitter, gays, and the gore of manslaughter. Stick with me, because this story’s a doozy.

To explain the premise of “Party Monster” and its surrounding elements is much like explaining the principles of rocket science to your 87 year-old grandmother: it’s kind of complicated. For those far removed from the gay community, the real life incidents that led to the development of the film may sound utterly wild and completely unbelievable but trust me: it’s all true.

First, let’s start by setting the scene: New York City in the late eighties. After Andy Warhol’s death in 1987, the NYC party scene was hit with a harsh blow that dampened the mood. Warhol was not only a pioneer of the pop art movement, but also at the forefront of every exclusive, cool party and club. Whereas the 1970s had Studio 54 as the premier club destination for wild times, the 1980s had Warhol. And then came the 1990s and Michael Alig.

Alig hailed from South Bend, Indiana and moved to New York City with nothing but a dream in 1984. Fast forward three years, and Alig was at the top of the world, throwing outrageous, over-the-top themed parties at clubs like The Limelight and even spontaneous pop-up parties at McDonalds and subway stations. These parties were hotly-anticipated spectacles, with guest self-expressively dressing head to toe in extreme fashions and heavy-handed makeup, bopping and smoking animal tranquilizers, cocaine and ecstasy on the dance floor. They called themselves the “club kids” and Alig was the self-appointed ringmaster of all the twisted debauchery.

Some guests wore chicken costumes, some wore functioning furnaces with fire spitting out the top, and some wore nothing but jockstraps. In club land, gender was fluid and everything was fun and games. Everyone was just there for the party, dressing up and making out and looking like glamorous freaks all whilst doing so. Alig alongside friend James St. James ruled the underground club circuit with their wild antics and extreme addiction to fashion and drugs. They even wiggled their way into the mainstream and appeared on the Joan Rivers Show in 1993.

“The club kids seemed to be right at the right spot and I felt like I won the lottery because I was able to put all of those things together. It was the perfect storm of a subculture and I don’t think it can happen anymore. It’s not possible for a subculture to grow and have that impact anymore,” Alig told The Collar Tones zine in 2016.

In 1996, it all came crashing down amidst a drug-fueled, financial altercation that led to Alig and roommate Robert “Freeze Riggs” killing dealer Andre “Angel” Melendez. After the murder, Alig and Riggs dismembered him and threw the limbs into a box into the river. Nine months later, they were both arrested and sent to prison. Alig was released in 2014 and arrested again in 2017 for trespassing and possession of crystal meth.

“Party Monster” highlights Alig’s rise and fall as the leader of this strangely stylish, queer movement. Based upon James St. James’ 1999 memoir Disco Bloodbath: A Fabulous but True Tale of Murder in Clubland as well as the 1998 documentary “Party Monster: The Shockumentary,” the film was directed by Fenton Bailey and Randy Barbato who are known for their production of “RuPaul’s Drag Race.” Conveniently enough, drag race RuPaul was a key figure of the 80s club kid scene.

While the circumstances surrounding it are maliciously criminal, the retelling of the crazy club kid scene makes “Party Monster” a gay classic. To be clear, it’s not Melendez’s death that makes this film a staple for the gay community, it’s the culture depicted within it that makes it impactful. Melendez’s death was utterly tragic and the result of debilitating drug addiction and Alig and Riggs must be held responsible for their despicable actions.

In light of the later tragedy, the early days of the club kids as shown on screen are an exhilarating storm of opulence and do-it-yourself glam under the disco ball. Bailey and Barbato painstakingly recreated fashions and looks from the original club kids – under James St. James’ guise – with utmost accuracy and impact. For an onlooker, these attention-seeking 20-somethings wearing sheer dresses, foot-tall platform boots, huge bedazzled head pieces and neon face paint may be extremely confusing or disturbing, but for Alig and his friends, it was a way of life.

“We were making fun of the idea of celebrity and fame. It’s a ridiculous notion, that some people are better and more deserving than others, but at the same time you have to admit it’s very alluring,” Alig said to The Collar Tones. “We were mocking this notion that in America we are so affluent and decadent that we don’t have to grow up if we don’t want to. I never wanted to be a big boy. I mean, who wants to grow up?”

The cult classic “Party Monster” is not only nothing without its extensive costuming budget, but also its star-studded lineup: Macaulay Culkin as Michael Alig (“Home Alone”), Seth Green as James St. James (“It,” “Robot Chicken”), rockstar Marilyn Manson as Christina Superstar, Dylan McDermott as club owner Peter Gatien (“American Horror Story”), Chloë Sevigny as Gitsie (“Boys Don’t Cry,” “American Psycho,” “Zodiac”), Wilmer Valderrama as DJ Keoki (“That 70’s Show”), Natasha Lyonne as Brooke (“Orange is the New Black”) and John Stamos as a talk show host (“Full House”). The talent alone involved in this film is lightyears ahead of any other gay movie in recent memory.

The legacy of this film lies not within its gruesome subject matter, but its pinpoint historical accuracy and lavishly insane atmosphere. By chronicling this fanatically outrageous party scene and its decline into murder, Bailey and Barbato set their sights on the stars and succeed with flying colors.

Gay people of today need to recognize the contributions and achievements of the gay people of yesteryear in order to know how to push forward in society and achieve equal rights even further, and “Party Monster” is a great place to start such a colorful journey.