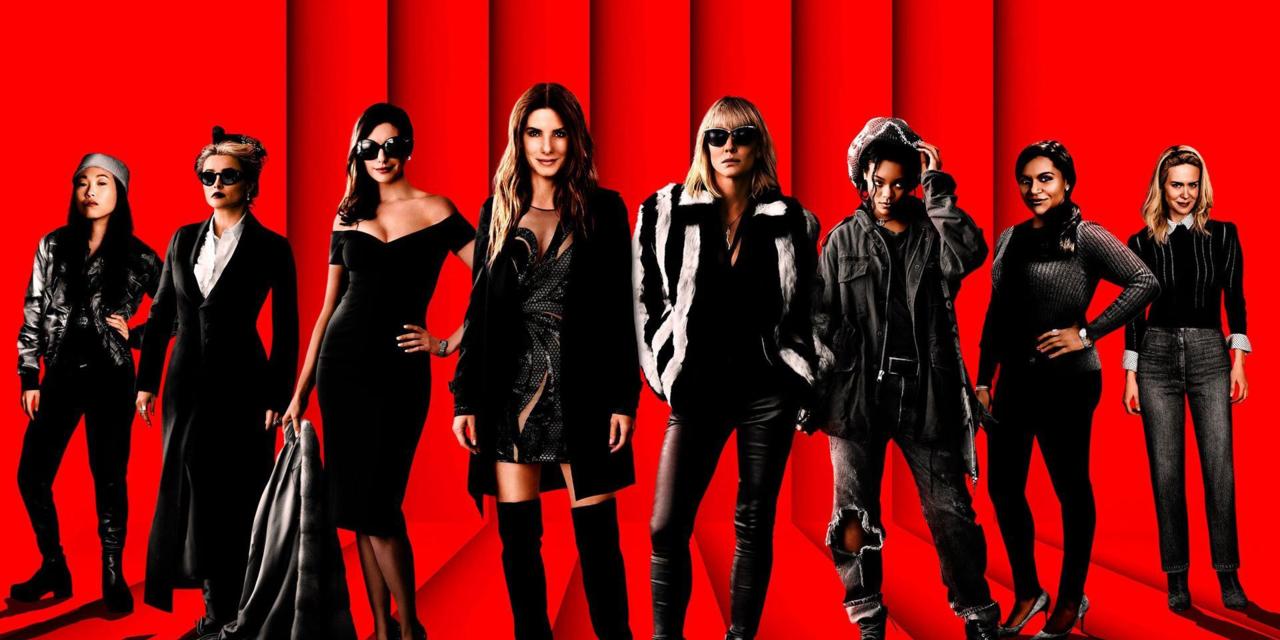 Movie Reviews on June 29, 2018 0Likes At The Movies
ShareTwitterFacebookInstagram

Director Gary Ross’ all-female spinoff to the “Ocean’s” franchise is a gem, and not a cubic zirconium one. Instead, “Ocean 8” is a diamond-encrusted entrée dripping with talent. But the star power presented should come as no surprise.

“Ocean 8” begins with convict Debbie Ocean (Bullock) and her release from jail after a five month stint for money fraud. Ocean, a slight kleptomaniac but total scammer, had meticulously planned her next heist behind bars and enlists in some friends to help seal the deal. Together, all eight women set their sights on a $150 million Cartier necklace that actress Daphne Kluger (Hathaway) will be sporting whilst on the annual Met Gala at the Metropolitan Museum of Art in New York City and hatch an elaborate scheme to split the multi-million dollar profits.

The convincingly stellar performances of Bullock and Blanchett are only further excelled by the great actresses by their side. Rihanna, for one, plays a clever computer hacker and stoner named Nine Ball and despite contributing nothing new to the “nerdy hacker” trope, she wears the crown beautifully. “American Horror Story” star Paulson also is a stand-out, playing a suburban mom who steals and resells electronics on the side.

“A ‘him’ gets noticed and a ‘her’ gets ignored, and for once we want to be ignored,” remarks Bullock at the initial meeting to plan the heist. These women have their sights set high on such a monumental theft and have huge expectations despite their combined history of petty crime. Can these eight women steal $150 million when their past experiences have only been small offenses like shoplifting? Can a street magician like Constance (Awkwafina) really go from stealing passerby’s watches to stealing a diamond necklace with a special magnetized clasp in the back?

Whereas typical action films have a bad guy who is out to harm the protagonist, instead, “Ocean’s 8” has just one villain: failure. If the plan goes belly-up, not only will eight women be in hot water but Ocean will be back in jail and this time, she might never leave. While critics are quick to state that the film puts heavy emphasis on dramatics like visuals or celebrity cameos, it’s simply not true. The film is fresh and exciting, and just because its superheroes are a bit corrupt and don’t wear spandex costumes doesn’t mean they’re not worth the time. A female protagonist doesn’t have to be like Wonder Women or scantily clad to capture your attention and make a splash on screen.

The premise of the movie takes its inspiration from 1960’s “Ocean’s 11,” a Rat Pack classic starring Frank Sinatra, Dean Martin and Sammy Davis Jr, centered around a string of casino robberies in Las Vegas. This film eventually led to a reboot series directed by Steven Soderbergh including huge Hollywood actors like George Clooney, Matt Damon, Brad Pitt and Julia Robert. Three films were released from 2001-2007 featuring this ensemble cast. Director Soderbergh cancelled any ideas of a sequel after actor Bernie Mac passed away, but Gary Ross caught wind of a concept to reboot the franchise with an all-female cast and jumped on board to direct.

“Ocean’s 8” is not only to be celebrated for its diverse cast of talented women, it’s also a damn good film. All in all the film feels very modern and smooth, not relying on gimmicks or cheesy, half-assed female empowerment monologues to drive the message home. It doesn’t rely on cheap tricks or sex appeal to draw viewers in. It’s a smart action flick, and Hollywood hasn’t been producing too many of those lately.

It’s a damn good film because it so effortlessly captures the feel of a huge blockbuster hit while subsequently being a huge blockbuster hit. As of June 25, the movie has scored a cool $172 million and has no plan of doggy-paddling soon. If you’re planning on seeing a star-studded film this summer, bet on this one because it’ll have you sitting on the edge of your seat biting your lip until the very end.

“Ocean’s 8” is in theaters now and you can view the trailer below.