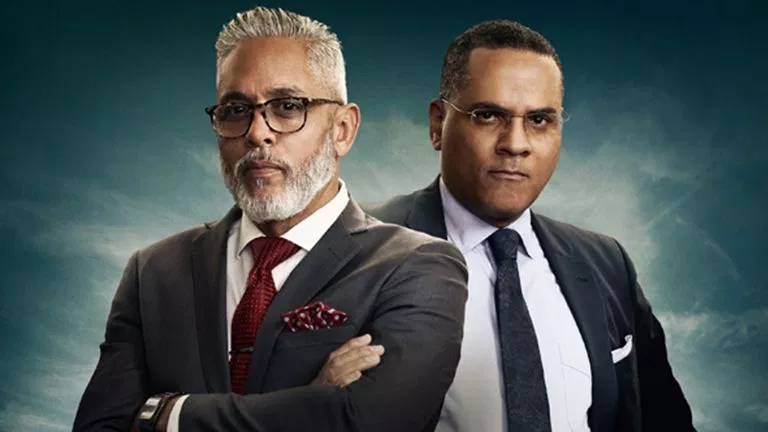 Sneak Peaks, Spotlight on July 6, 2018 0Likes At The Movies
ShareTwitterFacebookInstagram

David Quinn and Vince Velazquez are two former APD detectives. They are getting ready to premiere their show on TV One called ATL Homicide. These former Atlanta detectives have a long history with helping their community and fighting crime. They have set and broke a few barriers. Also, they coined a vast number of phrases. One of the two detectives even used the media as a strategic way to solve cases. Quinn and Velazquez talked with ATM about moments in their career and about the preparation for their show.

ATM: Take us through a day of production on this show.

DQ: Episode one was unique because we got to learned how things worked. One of the things we learned was that air conditioning makes so much noise. I am not sure if they visually removed the sweat, but we felt like a sauna. We were in a location in Atlanta that they rented out. It looked like an abandoned building and warehouse. It was a full day sitting in chairs talking about the particular dates for the cases. We were in suits and ties. I could have taken my suit off and rung it out. It felt like we were in the Himalayas.

ATM: Describe your overview on the Atlanta’s crime scene now.

DQ: There has been a huge shift in the way the policing is going down. The housing projects are closed. During the year 2000, this is where Velasquez and I lived with our people in the projects. There was an older and rich style of police. Each family we knew. The families have been disbursed throughout the county because of gentrification. Some lived 40 or 50 miles outside the county. Now, the homicides have been more metropolitan in terms of Atlanta. There is no more turf. We were very territorial, and it has changed a lot.

VV: Most see homicides occur in impoverished neighborhoods while watching shows. We had homicides in very fluent neighborhoods with murder, suicides, and domestics in million dollars condominiums during our careers. In one case, a man comes home in a high rise and was assaulted by two young men. They strangled him. Crime and homicides have no racial boundaries. Atlanta is no different.

ATM: Nicely said. What about crime fighting intrigues you to keep waking up every day to do it? Did you all get it mixed up?

VV: Great question (3x). A lot of people have a hard time understanding we fight humor and death. I’ll give you an example, we had a body that was badly decomposed, and the cavities were open. I have an intern with me when arriving to the scene. I also had a $300 pair Raybans on my head. There were maggots in the body. My glasses fell on the body as I looked down. The intern looked at me like, “Aw man, what’s going on next?” I got them back in my pocket. I was not about to lose these $300 pairs of Raybans. Every time I wear these glasses it reminds of the poor victims, location, and facial recognition.

DQ: I met my wife of 28 years on the police department. During this time, we had a house full of sick kids. My wife is still a cop in her last year before retirement. I could have not done it without her. I was solving murders like everyone else and folding clothes. While Vince and I were different, we were so alike in our passion. Keeping this real and honest. We put together investigation transparency when coming into this unit. We told everyone where we were going in terms of the suspects, courts, feds, and the prosecution. We wanted to hear things before the trial. We coined the phrase “Catch and Release.”

VV: That’s my favorite. People were like, “You had a killer come to the office. Here is your bad guy. You had enough to arrest him, but you let him go home.” We thought to arrest him another day because we found a way to make him feel comfortable. This is the transparency we worked with. People thought we were crazy.

DQ: We used to have a lot of these statements from the accused at the living room tables with their parents and love ones. This is a family matter. Our heart goes out to the victim in a homicide investigation. You have to respect the accuser. If you do not respect the accuser, then you will hit a wall. We stopped bringing the suspects to the station. We said, “Meet us at the house. Bring the aunts over and everyone.” We need to know what is about to happen to this family. Then we would leave and continue our investigation. Eventually, we locked them up.

ATM: Were these designated careers you envisioned as little boys?

DQ: Never (Laughs). My father was in prison. He met my son through a prison glass window. My son is going to be 24 in March. This is not the life I wanted myself to live. MY grandparents raised me. I grew up very modest, rather poor, but not to poor. I joined the military at 17 years old.  I started to get a small interest in law enforcement once I joined the military. I went to civilian work when exiting the military. I worked for Delta Airlines. I became fascinated about the police officer’s gear and how they interacted with the community. At 3.5 years with the airline, I started to feel a pull being a cop.

To become an aircraft engineer at Delta is very difficult. They pick one out of 100 interviews. I had made it. I took a 75% pay cut to be a cop. People looked at me like I was crazy. I wanted to be a police officer. I figured this was what I was supposed to do.

VV: I wanted to be a detective since six years old. I spent my 14 years going to prisons and courts to see family. I thought everyone visited the prison and court systems. It was amazing to me the males in my family went to prison and some of them survived it. I wanted to be on the other side. I saw my cousins get arrested and do long sentences like 20 and 40 years. I was raised going to prisons. No one in my family had ever worked in law enforcement.

ATM: How do you feel when you see your former careers wrongly depicted on television or in films?

V: Before we started filming for this show, I was like this is incredible, but we don’t do that shit. I am going to say it, “We don’t do that shit.” We had to get everything in 42 minutes when filming the show. DNA takes about six months. We always like to go back to talk with the jury to see how they felt after the trial. We had a case where a guy was beat with a gun. The guy cleaned the whole house up because we could not find blood anywhere. There was so much blood in the car. The jury’s response, “How come you did not pull something up to detect the blood?” This is not CSI Miami.

DQ: Gabrielle, the interesting aspect of this production is that they took the information Vince and I poured out to them and wrote the script. You will see characters playing us. Sometimes we could not be right together. On cop shows the partner never leaves each other’s side. We sometimes went solo to not overwhelm a person. The production team kept it 100. I really do applaud them.

ATM: Name a case that brought tears to your eyes and has never left you.

DQ: I had a case of a missing boy name Allen Watson, which you will see in episode two. He was a 15-year-old kid raised by this grandmother along with other siblings. Their mother died when while they were young. Watson came up missing. The jurisdiction in which he goes missing does not send up smoke signals. They assumed he ran away. Ten years later, his skull was found. I got close to the grandmother. The pain she felt has stuck with me. She ended getting very ill and grieved for years. We had her funeral in the mist of the investigation. I now have a tattoo of a skull on my shoulder, so this kid is with me for the rest of my life. They said he sold drugs, but this does not matter. Our job is to find out who did who and document the pain.

VV: David and I have figured out in our career that a young black boy missing is not given attention toward. It is considered a runaway and no one worries about it. Let it be some little white boy. You will see an hour of a case that took years to complete.

My case is still an open case since 2002. A 14- year old girl was killed in 1995. I got very close to finding the killer. I have kind of become her surrogate daughter in a way. We went through an emotional roller coaster. She hated me because I could not solve her daughter’s case. Then she would love me. Now, I know everything about her other daughters and their own kids.

ATM: In your former line of work, you all were surrounded around lifeless or soulless people, which best describes death. Does a person have to not be afraid of death to succeed in this profession?

DQ: From the time we get to the crime scene, there is the person who has been killed. They might have been slinging drugs. I do not fear death. I know it is inevitable. Velazquez and I have went to 100s of murder sites, but we also went to 1000s of death scenes. We have been around death so much that we really get it. Now, I say let’s have a ball today! Let’s go to Hawaii today! Our days are like this. I know that every day is exempt. This makes me laugh. There are cops who do not know this because they do not know homicide. One of our case was a guy working on this computer at home who died with a cup of coffee. He had no expectations to die. We understand how short life is. I wish more people understood this. This is church. You are not in control of your fate.

VV: It makes me live life fuller. I have jumped out of an airplane. I will not do it again (Chuckles). I went ziplining. I am about to ride on a camel in a couple of months. Who wants to ride a camel? I am going to do it to know what it feels like. We know how easy it is to get in your car, ride to a convenient store, get a soda, and get shot in the face. This could be a father of five. You can be church praising the lord and someone comes to shoot you, your wife, and your kids. No one expects this. We know this can happen. I am living in the dash. That line between the date you are born and the date you die. That little dash is your life.

Quinn and Velazquez are set to star in their show ATL Homicide on TV One. This show will be a full insight of their long served careers. Their cases were compiled into episodes throughout the tedious hours of sitting down with production staff. Both APD detectives express their love for crime fighting through dramatizations.

FIRST LADY 3 | Behind The Scenes Images