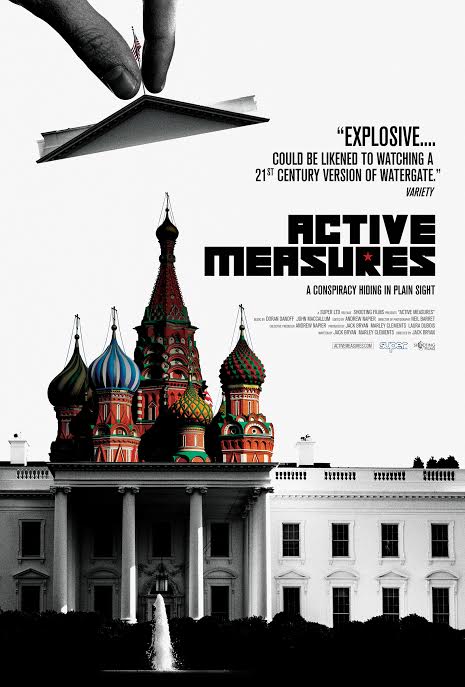 Sneak Peaks on August 2, 2018 0Likes At The Movies
ShareTwitterFacebookInstagram

ACTIVE MEASURES, a film from director Jack Bryan that details a decades long connection between Donald Trump and Vladimir Putin, including shocking new reporting on Trump’s dealings with Russian mob figures, and expert analysis on the largest and most effectively executed espionage operation in history—Russia’s meddling in the 2016 US Presidential Election. The film made its world premiere at this year’s Hot Docs, and will be released on August 31, day and date with exclusive theatrical engagements in New York and Los Angeles and on digital platforms.

In ACTIVE MEASURES, Bryan exposes a 30-year history of covert political warfare devised by Vladmir Putin to disrupt, influence, and ultimately control world events, democratic nations through cyber attacks, propaganda campaigns, and corruption. In the process, the filmmakers follow a trail of money, real estate, mob connections, and on the record confessions to expose an insidious plot that leads directly back to The White House. Unravelling the true depth and scope of “the Russia story,” as we have come to know it, it is a jarring reminder that some conspiracies hide in plain sight. ACTIVE MEASURES is essential viewing in today’s world.

“When we embarked on this project we thought we’d find a scandal but what we uncovered was the greatest threat to democracy in almost a century. It is impossible to understand what is happening today unless you know how it started and why. Once you do the news becomes terrifyingly predictable,” said director Jack Bryan.

NEON reveals new trailer FOR THE YEAR OF THE EVERLASTING STORM