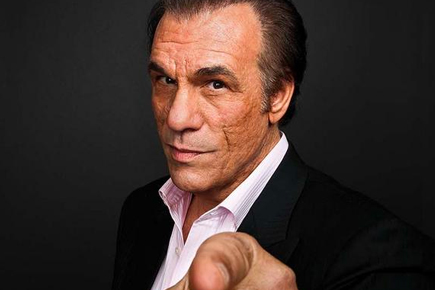 Theaters on August 14, 2018 0Likes At The Movies
ShareTwitterFacebookInstagram

Robert Davi, Danny A. Abeckaser, and Stevie Guttman are the trio behind one of the newest documentaries, Davi’s Way. Davi already has a long history of acting in Hollywood, having been in over 150 movies from Die Hard to Goonies. However, singing is another one of his passions. He has a love for acting but shows us a true passion through music, specifically that of Sinatra. He tours the world performing tribute concerts wowing audiences with his voice. This documentary shows challenges along a path by Robert to recreate Sinatra’s “Main Event” with the help of producer Danny A. Abeckaser and a hired assistant, actor Stevie Guttman. Although there were issues that would arise, the trio keep the viewer engaged in the behind the scenes of putting a concert together. Their chemistry makes for a great film, with all the moments unscripted and playing out in a way that you would actually think were preconceived.

All three gentlemen talk with ATM about their journey of making this film and how it transformed them. Davi relives the tunes of one of the greatest Frank Sinatra for his anniversary concert, but not in the way he originally anticipated.

ATM: You guys did a fantastic job on the documentary.

RD: Did you laugh a little?

ATM: Yes, some moments were sad, and some were humorous. There are not a lot of documentaries that show the behind the scenes of how a concert is put together. From the outside looking in it appears to be easy, but it is not. The film shows the laborious work that goes into it that people do not see. Let’s begin with Davi first. How does singing help express who you are?

RD: Singing was such a huge part of my life when I was younger, along with the acting. It was a part of who I was and how I expressed myself. I was very heavy into opera as a young boy before my singing evolved. I had always stopped this part of myself. It is almost like denying a part of yourself. I felt a pain, as if someone felt they were a woman stuck inside a man’s body. My singing was dying to come out. It would be this kind of frustration your whole life, not being able to express who you really are. This documentary shows the primary urge to express my vision in front of an audience and to communicate this in a way that was accurate. Also, the channeling experience that music provides a person and how this lifts you like the wave of an ocean, is also what I wanted to show. I wanted to show how music can excite and spread joy, and pay tribute. Music is so exciting to me and allows me to feel alive, and I was just trying to honor Sinatra with that excitement, in the way he deserves to be honored.

ATM: Danny and Stevie, explain why you decided to participate in this project?

SG: Danny was kind enough to come through with an opportunity to work with Robert, and I of course jumped on it. He is an accomplished actor who has a ton of experience and a plateau of knowledge on the craft. I thought it would be a nice opportunity to learn from someone who has done more than me and made a huge career for himself.

DA: I met Robert on the set of The Iceman. We were paired together for our press day and I was able to experience Robert off camera as we did not have scenes in the movie. I saw how passionate he was about Frank Sinatra and about his music, it was unbelievable… his excitement. He talked about a film he wrote to tribute Sinatra called “The Voice.” I read the script. The script was great. However, I felt that following him on a documentary path, behind the scenes of trying to get together this tribute about Sinatra, this huge concert event, made more sense to me. That was interesting to me. I was more interested in this aspect. I presented that idea to Robert, and he was immediately on board. I told him he would need an assistant, and immediately suggested Stevie. That is how it all started. And here we are, finally releasing this film and I cannot wait for everyone to see it.

DA: No, I am not being humbled.

RD: Yes, you are. Danny is a friend and a person who supports people like Stevie. He is a person who is loyal to people. We struck up a friendship during the time of the press conference on The Iceman, as he mentioned. He then came to see me sing on Long Island, and brought a bunch of people. To support my show was really appreciated by me, that he wanted to see first hand my performance. The crowd was 10,000 people that night, it was a great show, great energy.

DA: I give little details. The right amount. I don’t want to give it all away. You feel me?

RD: Well, this is a passion statement. You came out and supported. Most guys say they are going to come and do not show up. Danny came and brought other people. He kept his word. He saw what I did. So I showed him the script. We were approaching the anniversary of Sinatra, timing was in our favor. I felt this would be an interesting concept. Like you said earlier Gabrielle, you do not see the behind the scenes of putting a concert together, most people have no idea. This is another aspect of what Danny was saying.

ATM: You mentioned compromising acting, but not music. Explain this more.

RD: You have family and expenses. I have never compromised my work as an actor. I may have taken projects that I should not have taken for better money. Instead of holding out for the projects I should have taken during difficult times of my career. I was unavailable for certain films. This is probably because I was doing low budget B movies. I picked the projects because the money they threw at me. Looking back, I would definitely have made a few different decisions, but I am here now at this time because of those decisions, regardless, that is the case.

ATM: Stevie, there is a scene with you and Robert sitting at the table. There is a discussion about wanting this documentary to be as real as possible. Most productions would have cut this scene out. How did you all become comfortable with each other?

SG: A big piece of this was more than putting on a concert. It was more of a character study. We followed Robert in his career, I did research to know his work and his successes.  I saw the dramatic shift of his success from acting to his success in singing, and let me tell you, he has phenomenal success with his singing. It was an interesting study to see how I could stay natural on camera as myself and not in a role. This is amazing because this is life. They wanted to keep the greatness of life and the realness of the personal journey and the work.

DA: Obviously, when putting together a documentary you have no idea what to expect. We did not expect that whole conflict..which unfolds in the film, not giving a way too much. This might have been very meaningful to Robert. As filmmakers, it really states the truth to the storylines. Do we want to show the rawness with Stevie because he wants to storm off? Stevie agreed to be in this documentary knowing we were going to follow him. We decided to keep it as real as possible. This added to the climax of their head-to-head moments in the film. It was all actual and legit, not planned.

RD: Gaby, there were scenes in the film where I did not want to sanitize myself. This would have been boring. I did not want to be sweet all the time. I was real, the real me. Sometimes frustrations reflect onto those around you. I also wanted to teach, as Stevie was looking to me as a mentor. That meant a lot.

ATM: Stevie, how did you feel you transformed emotionally throughout the film?

SG: This is something I am still going through. I have trouble expressing my anger. This is something that makes me very nervous. In the beginning, I was timid, quirky, and quiet when first meeting Robert. I learned that it is fine to speak up and stand up. Nothing is going to happen for the most part. You are allowed to speak up. It was a great learning experience. It was a good emotional ride.

ATM: Robert, there is a scene when your daughter admits to not feeling good enough. Throughout your career, have you asked yourself whether you were good enough?

RD: I was too stupid this ask this question. She is a beautiful singer and actor. It is difficult to have self-confidence. I wanted to express to her that you must have passion inside. She should not worry about a boyfriend, or having a Dodge Charger at 22. I did not care about these things, and do not want her to at that age. You do whatever you have to do to express your work. My main focus was to get money to pay for acting and singing lessons when I was a kid. My parents had no money. I had three jobs. I did not care about a Dodge Charger. I walked on a railroad track. I did not have a girlfriend at the time. You have to set up a conscious and find the right people. Confidence is something you cannot give. They can gain their own confidence in other people. Insecurity comes in from not really knowing.

ATM: I feel when a person believes this it is the best part. It is between will I accomplish my dream or will I not. It is the person that takes the risk. They are confused with what they are doing but they still preserve to keep going. You mentioned in the film that people laughed at you, but you saw the vision.

RD: Based on my upbringing you would not have the confidence to be an actor, and I was told I couldn’t. There was no way. They stickered behind my back. This was a truth. But you dismiss it. You go forward to what your dream is. If you have a dream, have to follow it despite what others say or put you through or label you as. You have to go for it with any dream. Only you can make your own success.

The fabulous trio will continue to work together throughout this Summer and Fall in New York, on Abeckaser’s next film, a scripted feature based on true events, called Apalachin. In Davi’s way they feed off each other’s passion and inspiration. Davi, Abeckaser, and Guttman put together a raw and great documentary for the whole family to sit back to reminisces the exceptional tunes of Sinatra. It is charming, funny and keeps you entertained.

Davi’s Way releases in theaters August 18, 2018. The film is directed by Tom Donahue and distributed by 2B Films in association with Creative Chaos. It is produced by Danny A Abeckaser, Ilan Arboleda, Tom Donahue and Robert Davi.

They open at the Cinema Village theatre in New York City on August 17th with a limited run until August 23rd. It will then hit iTunes, Amazon and Amazon Prime on September 4th.