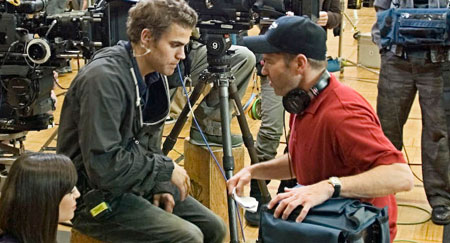 Spotlight on August 16, 2018 0Likes At The Movies
ShareTwitterFacebookInstagram

Atlanta Film Consultants has a clientele list that stretches from low to high in the entertainment industry. Aside from Brynn Duvall and Jeff Fisher running a full service film consulting company, they have prior experience in the industry. As a young girl, Brynn played in several independent feature films and had bookings with national commercial spots. Fisher started as a production assistant and has become a sustainable business partner, adjunct professor, and Hollywood director. Brynn gives insight into the company and her background as Jeff sums up the future direction of the company. They both talk with ATM about the inside of their excellent business and the reality of it all.

ATM: How does an American woman such as yourself get to this point in her life starting out as a Psychology major?

BD: My two passions have always been movie making and psychology. Movie making intrigued me at a young age. I took acting lessons in Atlanta from Betty Motes who is Julia Roberts late mother. I booked some national commercial spots and a few independent feature films. The real turning point was earning an internship on a low budget horror movie shot in Atlanta. It did not last that long because my mother pulled me off the set. (Chuckles). She saw the main characters shooting a scene while topless.

BD: This got the wheels turning and got me hooked. I was fascinated by the psychology of the set. The different positions and understanding these

positions. Also, I was intrigued by the chemistry required to make it all happen. Psychology is about understanding people. I am fascinated with people. The entertainment industry has tons of dynamic and interesting personalities which was a huge draw for me. So basically I was hooked and moved to LA after school to try to work in some way in the film industry.

ATM: How did this turn out for you?

BD: It was great. I stayed out there for eight years. I worked for Gwyneth Paltrow and Blythe Danner. I have worked on “Will & Grace,” “Meet the Fockers,” “Crossing Jordan, “Two and a Half Men,” and lots of other sets. This helped me understand how important skilled crew is and also how crucial the overall chemistry of the crew is to the success of a production. When the right crew comes together…that is when the real magic happens.

ATM: Explain how it felt being on set compared to watching it on set.

BD: That’s a good question. From a young age I would only rent  movies that had behind the scene footage. I liked watching movies for entertainment of course, but to me, it was really about seeing how the crew had put it all together. I often hear people say being on set is boring and a lot of “Hurry up and wait”.  Once I got on set it wasn’t a disappointment. I was never bored. Never.

ATM: Take us through the blueprint for Atlanta Film Consultants.

BD: After I moved back to Atlanta. I was getting calls from people I had worked with in LA. They were asking about film and television work availability in Atlanta. There were crew members wanting to know about job availabilities. Also, producers wanted to know about crew availability and the filming environment in general in Atlanta. I have always been a matchmaker and a connector for people. I realize what was missing in Atlanta was a pipeline for productions coming from LA or other places to shoot in Atlanta. There was a real need for this.

ATM: What about your job keeps you waking up each day?

BD: Each day is different. I get to meet creative, passionate, and interesting people and to connect them with others. We spent the last year interviewing local crew and production vendors. All these personalities energized me. I like to understand what makes them tick and their needs.

ATM: At AFC, how do you turn a loss or bad day into a good day?

BD: I have always been a very optimistic person. I have learned so much through looking back on my life in terms of mistakes and difficult times. Each time we have a challenging day, I try to remind myself that adversity or stresses only help us improve  and move forward. That might sound naïve but it has served me well so far.

BD: Jeff and I went to the premiere of Bad Moms Christmas. It was fun. It was a combination of my old world in LA and my new world in Atlanta which felt really special. My second memory was when Turner became our first big client. This was exciting.

ATM: Jeff, here do you see AFC in a few years?

JF: We are growing our relationship with crews, studios, and unit managers in Atlanta. We would love to continue expanding outside the Atlanta market and into other cities. These cities would be magnets for film production.

ATM: Why did you decide to co-establish a film consulting film?

JF:As a director, I had shot in heavily incentivized locations (like Atlanta), and knew  what a director, producer and  crew member could be up against. A film’s budget determines how much prep you have to get your cast and crew together.  –but  no matter, the budget, you usually have a limited amount of time.  You need a certain quality of cast and crew to make the best product possible—and sometimes you just don’t have the time to always find the best fit.    Brynn and I were able to spend the time meeting the best and brightest that this market has to offer without those time constraints.  We wanted to spend this time meeting this quality of crew. I ask crew the sort of questions as if I was hiring them for my own show.  We wanted to offer this as a service to productions coming into town–to save them some time and money in the process and show them all Atlanta has to offer.  (Note:  Fisher has directed movies for Hallmark Channel and Lifetime,  including Hallmark’s highest rated movie of last year “My Christmas Love,”  He’s also worked on “Keeping Up With The Kardashians,” “The Real Housewives of Atlanta,” and “The Simple Life.”  His first feature (“Killer Movie”) premiered at the Tribeca Film Festival and helped launch the careers of Kaley Cuoco (“The Big Bang Theory”), Paul Wesley (“The Vampire Diaries”,”) Leighton Meester (“Gossip Girl”) and others.

ATM: How would you explain the process of AFC today compared to the beginning?

JF:. Our first year was really about access.  It was about meeting the best quality cast and crew in Atlanta. We built up our database.. We needed to offer the productions coming to town distinct benefits and save them time. We  were lucky enough to work with clients with sizable production budgets as well as one’s at a much lower budget tier that first year.  Today we’re doing the same thing, only more of it–which we’re grateful for!

ATM: Did you grow up with a father?

ATM: What has your father instilled in you that has shaped you as the man today to co-run Atlanta Film Consultants?

JF: That is such a great question. My dad told me anything that you put your mind to, you could achieve. That message of possibility was invaluable. Honestly, my Dad was very nervous about me wanting to work in the film industry—something I had been telling him I wanted to do since I was five years old.  He was understandably worried it wasn’t really a sure thing.   But he also believed if you were persistent, anything is possible

ATM: Are you near a mirror?

ATM: Look in the mirror and tell me what you see in your own reflection.

JF: I see somebody that strives to have intentions of fairness and respect. I see somebody that is a trier. I have always kept trying.  I also see someone that’s a bit nervous about answering this question.  It took me a little by surprise.  (Laughs)

AFC consults with productions to help film professionals find cast & crew, gear, studio locations, and other film industry on-location services in Atlanta, GA. They are one of the best full-service film consultant companies in Georgia. Duvall and Jeff have taken their childhood aspirations and turned them into a service that provides the best support and suitable connections to the film circuit in Atlanta. Atlanta Film Consultants is soon to move into a new location at a prestigious film area and studio in Georgia.

WARNER BROS. RELEASING ALL 2021 FILMS IN THEATERS AND STREAMING SERVICES SIMULTAENOUSLY IS A DOUBLE-EDGED SWORD

Who will be the next James Bond?