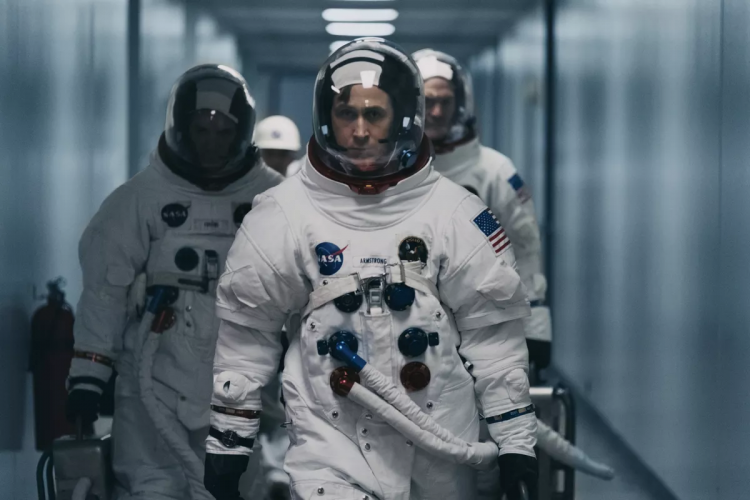 Interviews on November 8, 2018 0Likes At The Movies
ShareTwitterFacebookInstagram

ATM: Describe what a day on set would be.

DL: One of my days on set was filming with Ryan Gosling and Jason Clark. The shooting was in a neighborhood here in the Atlanta area. I play Ralph Morse. He was a prolific photographer in the last century and worked for Life magazine. He had access to all the private lives of the astronauts. I was in the Armstrong home, which was the set I was on mostly. My first day was an outdoor grilling scene at the Armstrong home. We walk into this house and talking to Damien about where we were going to shoot this day. I asked to use the bathroom to one of the PAs. They had no plumbing on set. So, they had to rebuild the house that the Armstrong’s used and used it to every single detail you can imagine. We shot outside with Justin Clark and Ryan.

ATM: What did you learn about this mission and Neil Armstrong?

DL: The whole story is not about his mission, but it is really about the relationship between his kids and wife. There was so much I did not know. I learned that he lost his little girl even before he decided to take on the mission and move to Houston. She was very ill and passed away. It was about all the hardships that he had before this. I knew about the astronauts who had passed as one of the test missions.

This did not make it into the film, but their house burned down to the ground in the middle of all this in Houston.

It was insane the number of things him and his wife went through while trying to fly to the moon. It is a real hero story about all these guys. It is called First Man. So, it is really about his story of how he made it to the moon. It is beautifully told. It is a love story. It is a story about overcoming these crazy obstacles. Not only just the mission, but all that the families went through. Also, about my character. He was a fascinating man. I love when I get to play someone who I did not know and learn about their life. All through World War II and until he passed, Ralph was a prolific guy too. He became very cool with the Armstrong’s in Atlanta.

ATM: Why do you believe he was courageous enough to embark on this mission?

DL: He found what his passion was and followed it. There was a lot of cost involved. There was the relationship with his wife. She was a strong woman and knew this was something he needed to do. The drive and passion for this one thing in your life. I also believe it was all the lost he had, and he was not going to let this part of his life define him. It was for him to do it. When you read about his journey, it is as if was he put on earth to do something like this. For him to do it through all the adversities in their life as far as personal things, it was remarkable. Some of the other astronauts were about the fame of it. He was not about any of this. He was such a private man and his focus was the mission only.

ATM: Based on the title, do you believe that being “first” is always a positive thing.

Once you become the first to do something, not a lot people are going to be able to see life with this person’s point of view. Mentally they are unconsciously separated.

There is a second, three, etc. there is a deeper psychology behind this.

DL: With his case, he did not choose to be first. This is interesting. His goal was never to be the first man to walk on the moon. He was chosen. This is an interesting thing from his point of view. You set a mark and an expectation into whatever it is. You kind of put yourself in this place of what is next. I would be interesting to find out the post story about him and how this affected him. This is a good question. Why not be the first to do something? It is always exciting when you see other people breaking barriers and being the first to accomplish something. We all do not have this experience. We can all empathize and appreciate it.

ATM: This is great, but mentally your mind changes. People cannot think like this person who is coined the “first.” Many people will not get to

see life from their point of view. There is only a first. A second cannot see life mentally from a “first.” Basically, once you are first you forever do not 100% share the same mindset as everyone around you. Life is different and it completely changes.

DL: There is definitely a different perspective. The people who do things and are the first, depending on what it is, can carry a responsibility. In their mind it was just a goal they were working toward and they happened to be the first. Especially the awards in the black community and the Asian community we have seen recently in the entertainment industry. It is about freaking time. Being the first is interesting in this category. These people have working their butts off in doing what they do. There is a different context to be the “first” in what you do. It is really through the filter of this person and what they have next through the pipeline. You are going to have a perspective life, but your personality will change.