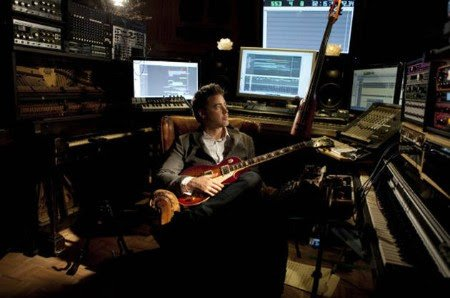 Spotlight on November 30, 2018 0Likes At The Movies
ShareTwitterFacebookInstagram

ATM: Describe your technique or strategy for composing.

RD: People have likened music to fashion. I can never really tell if a shirt works until I try it on. The same applies to music to picture. In a sense, I’m dressing up the picture, trying different pants, shirts, and clothing, finding the best fit for the personality, the identity of the show. The score communicates emotional subtexts on a unique level both conscious and subconscious. At every turn I’m responsible for guiding the audience to feel the vision of the show’s creators.

ATM: What inspires the tunes you use to match with the scenes so that we can feel this impact?

RD: For S.W.A.T., the starting point was the theme. We had to address that this story has a unique history with its main title. This is rare these days. Most networks are so worried about their audience changing the channel that they limit their credits to 5 or 10 second. When Barry de Vorzon’s classic theme came out in the 70s, it charted. It was top ten. It was released as a disco instrumental performed by Rhythm Heritage. We tried to pay due respect, complete with brass stings, live orchestra, wah guitars and live drums. We endeavored to stay true to the intentions of the original piece but give it a fresh contemporary coat of paint. Some of those vintage elements have found a place in the show and some have been replaced with more of a contemporary scoring sensibility. The electric guitar is often used, every now and then there is a hint of the 70s funk. Justin Lin directed the pilot and he brought with him his epic Fast and Furious sensibilities.  They work well for the show, the big stunts and the fast-paced action.

There are decent car chases but there is also an emotional arc to the story. For that we call upon a live string orchestra to deliver that cinematic sweep. We use various percussion, but traditional drum kits only sparingly. A lot of drum machine. Ambient electric guitar textures and strings for the emotional parts. During the pilot, Justin and the producers wanted to save the S.W.A.T. theme as a big musical payoff at the end of the show, and it worked! We got a lot of comments about people getting the nostalgic at the closing shot when the familiar melody and groove kicked in. I’m also fortunate that they give me a lot of freedom with the score.

ATM: What are your favorite types of scenes to compose for? Romance? Drama? Action? Where does your best work show?

RD: I love the challenges and the problem-solving. My favorite season-one episode was called “Homecoming.” There were two big moments for the score. The first was during a climactic action standoff. I was asked to do something quite different; to include an opera singer! That was a great and fresh challenge to solve. It could very easily be ridiculous. I was given the opportunity to make it into something exciting and different. I started by laying the framework of an action cue and then called upon the talents of a fantastic singer named Suzanne Waters, whose incredible voice knocked it out of the park. At the end of the day of course, all this work has to share space with the sound effects, and some of the detail gets lost beneath tires screeches and machine-gun fire.

In the same episode, there was a closing montage that cut between a one of the S.W.A.T. team members at a memorial service for his grandfather, also a S.W.A.T. veteran and a boy visiting his father in prison. Both relationships complicated by conflicting emotions. The grandfather, although holding a respected position in the history of the department, held racist beliefs, which caused a lot of friction with the grandson. On the other side, the father in jail who was trying to make arrangements for his son to stay out of trouble on the outside and their meeting. It was a tear-jerking emotional scene. It is challenging to make people cry. I figure no one else will cry if I can’t find the chords to trigger tears in myself. I have to reach the core, the place the tears come from within myself before making it work on someone else. It is funny to have this as part of my daily job description. Someone would knock on my studio door, find me inside with tears streaming down my face. Someone once told me, when an actor speaks a line and he/she doesn’t fully comprehend the meaning of what they are saying, then the audience will not either even if they say it clearly. The disconnect is transferred through the performance. It is the same with music.

ATM: What makes you naturally cry beyond what makes people normally cry?

RD: It’s my job to be in touch with my emotions, but I don’t think I feel anything any stronger than anyone else. I think musically what I look for when searching for tears is first the dream, the hope of what could have been, the yearning, and then find a way to let it fall short, to disappear. The emptiness where the dream once was. Often the instruments I’ll turn to will be orchestral strings, piano, solo cello, sometimes a beautiful Armenian wind instrument called the duduk. Sometime electric cello, and when it really gets real, the human voice is an instrument we all have a deep connection to and for a very profound sense of loss, it can’t be beat.

FROM ‘GET OUT’ TO ‘US’ TO ‘NOPE,’ JORDAN PEELE HAS CEMENTED HIS LEGACY AS A REVOLUTIONARY OF MODERN HORROR