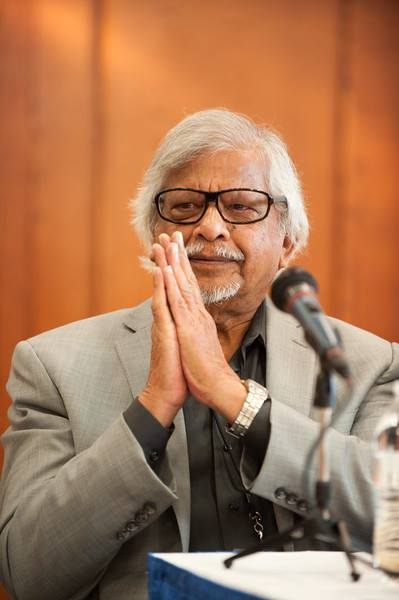 Women Passivity Seen Through the Eyes of Dr. Arun Gandhi

Interviews on December 18, 2018 0Likes At The Movies
ShareTwitterFacebookInstagram

Dr. Arun Gandhi discusses the effects of women passivity that gets seen in our society. This term is also seen in film and television. Gandhi gives pointers on how and why women are still oppressed even though they are the foundation of this world.

ATM: How will your literature continue to allow people to understand passive violence is not the way?

Arun: Through the many lessons my grandfather and parents taught me. They played a huge difference in my life. I feel I can share it with the rest of the world. It gives the new perspective on the philosophy of nonviolence. This is a political conflict resolution. This is what I have figured out and wanted to inform people.

ATM: Explain more of the significance and moral concept for your book Gifts of Anger.

Arun: I realized that anger is a very substantial conflict to violence. Harvard University did a study and concluded that more than 80% of the violence we experience both in our personal or in the life of our nation is all generated by anger. We get angry and go to do things that change the course of our life. We learn that anger is good, and it is a powerful emotion. We need to use it intelligently and constructively. We will be able to reduce it substantially. This book shows anger is good and it is not something we should ignore. We should learn how to use the energy constructively.

ATM: Explain one of your talks with a school.

Arun: I recently was on Skype with a school in San Diego. For 90 minutes they asked many questions. They are doing reports on how they got inspired. It really does affect them. They appreciate everything I talked about this in addition to anger.

ATM: What is your commentary on the movement of society now?

Arun: It is very distressing. There is violence going on everywhere. Especially, what happens all around the country with race issues. This shows we need to change and that there is something wrong with our society. We need to stop and look at the deficiencies in our society and transform them. If not, then we are never really going to be civilized people. Civilization is not about how rich we are, but it is about how moral we are. Also, how we can relate to each other. I call myself a peace farmer. I go out to plant seeds and hope that someday the world will change.

ATM: How did you learn about nonviolence through violence?

ATM: The elements of how women get treated are mirrored from film and T.V to society and vice versa, in knowing this, how can this drive the knowledge of violence toward women both passively and physically?

ATM: With this society understanding and recognizing the different ways violence is put on women, why do you feel it is still a high issue?

Arun: 1 the suppression, ill-treatment, and violence against women goes back to pre-historic days when men considered women to be chattels to produce children and cook meals for the family. Men have not out-grown this mentality despite all the education. Films and TV shows have only endorsed this ancient attitude. Women were respected and held in high esteem only in those ancient tribes which observed matrilineal succession. But the over-powering male chauvinism destroyed that concept, and since then Man has dominated over everything. Women remain second-class citizens subject to both physical and passive violence.

Gandhi famously said: No one can oppress us more than we oppress ourselves. In a Culture of Violence where disputes can only get resolved violently, the oppressed find themselves as victims. As victims, we become helpless and are always seeking others to come to our aid. People have spent lifetimes being victims and helpless and suffered oppression. Gandhi attributed this to the Culture of Violence. It is for this reason that he showed the world the power of nonviolence which enables anyone to take action without being a victim.

In the Women’s liberation movement, women sought equality with men. Women spent all their energy to become as strong as men, as mean as men, learned to box and wrestle and all the other violent attributes of men.The implication was that Man is perfect and we must be equal to Man.

Ideally, women should have sought respect and individuality.Men and women are never going to be the same simply because women can produce babies and men cannot. Seeking equality leads to a confrontation between the two (where we find ourselves at in present)whereas seeking respect is unifying and uplifting. Both have to work together to respect each other mutually.

So, violence against women persists in all its forms. The answer is Education with enlightenment and purging our minds of the belief that a male heir is the most important.  Women accept subjugation because for the most part women see themselves as bait to catch the best male fish.

Multi-billion-dollar industry thrives today to make them look beautiful and attractive to men. When they catch a handsome guy, they feel proud and boast about their conquest. Men want women to show off their legs,and their bodies and the women oblige. For the most part, men decide what the woman should wear and how she should behave, and the women oblige.

Then you have the mother-in-law syndrome. Every mother-in-law hates the daughter-in-law, and that cycle has been rife through the ages. Women are so engrossed in competing with each other that they hardly have time to work together to earn the respect they deserve.