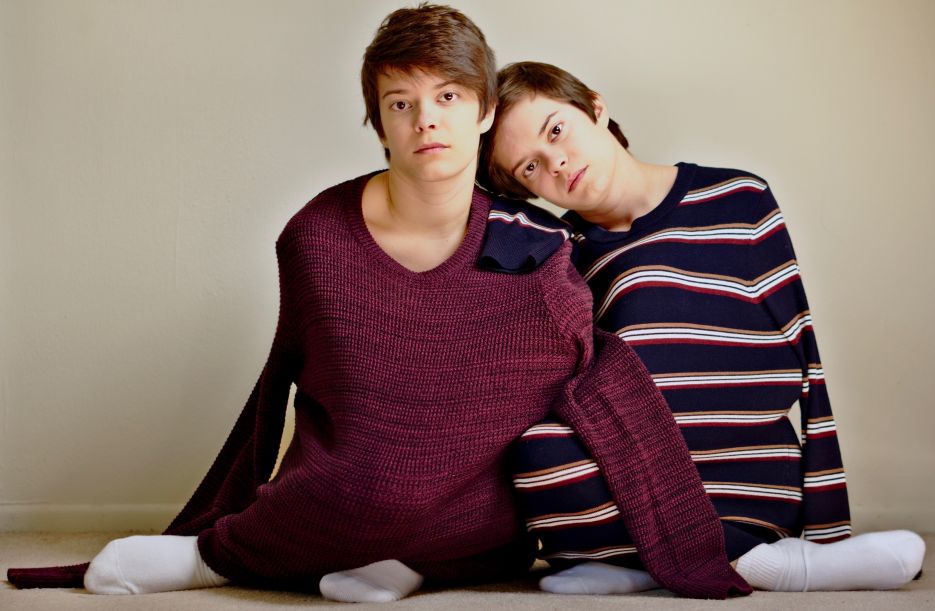 Interviews on January 31, 2019 0Likes At The Movies
ShareTwitterFacebookInstagram

Emily Hinkler and Elizabeth Hinkler are powerhouse twins who are actors, producers and LGBTQIA advocates. They played conjoined twins on two episodes of ABC’s The Good Doctor. Emily recently played a boy (Lee) who is forced to attend gay conversion therapy in Boy Erased. Elizabeth will be on the big screen this spring in the movie Under the Silver Lake. They take on separate projects but do not feel in competition and instead share a strong bond.

They are currently starring in the YouTube Premium series Overthinking with Kat and June. The series chronicles the hopes, dreams and fears of Kat and June, whose thoughts are heard out loud.  Emily and Elizabeth play twin sisters Tessa and Molly, the best friends of Kat. Together the trio hatches plans that are bound to fail and cause hilarious misadventures.

In their spare time, the twins volunteer with foster youth and Trans Lifeline, an organization that works to meet the needs of the trans community and fight the epidemic of trans suicide.

ATM: I grew up an only child and am curious about what it is like to be twins?

Elizabeth:  Every twin relationship is different, just as all types of relationships are.  We do have a close bond, but wouldn’t necessarily credit that to being twins, because any pair of people can cultivate a deeper connection.

Emily:  We nurture our bond through respecting one another and taking time to support each other’s feelings, thoughts, values, and work, as well as giving the other space to grow individually.  It is amazing to feel so much support from each other in each of our pursuits, and we are incredibly grateful trusting that we will always have each other’s back, and will be the wind beneath the other’s wings.

ATM: I am sure that you support each other; but are there times when there is a healthy competition between the two of you?

Emily:  With both of us being actors, we understand that there can be inherent competition, but we choose to support one another.  We are each other’s biggest fans and encouragers.  When we audition against one another, it doesn’t feel competitive or like a direct comparison because we are both so different, and bring each of our unique intricacies to the audition.

Elizabeth:  If a director picks one of us over the other, we know it has nothing to do with us personally, and doesn’t mean that one of us is better than the other, but that the director clicked with one of our interpretations more.  When one of us gets a part, it is a win for our team.

ATM: What is the series Overthinking with Kat and June about?

Emily: Overthinking with Kat and June follows the story of an awkwardly blossoming relationship between two new roommates- one a complete anxious introvert, and the other, a bubbly, outrageous extrovert.  We play genderqueer intense thespians Molly and Tessa, the best friends of Kat, and are always scheming up excitingly brilliant, yet failure-prone plans.  We had a blast working on the show. The cast and crew bloomed into a close-knit family, and it was a joy to make people laugh!

ATM: I know you enjoyed doing an episode of The Good Doctor. Can you share a fond memory?

Emily:  We were recurring guest stars on two episodes of The Good Doctor playing conjoined twins, Jenny and Katie Kunkler.  Working on that show was absolutely amazing- it was like lightning in a bottle.  The story line was incredible and complex, and we really appreciated the opportunity to play.

Elizabeth:  Not only did we both get to work on the show together, but we each had our own storylines as it is important for us to be seen as individuals. To top it off, the cast and crew were extremely talented and down to earth. The directors for each of our episodes, especially Cherie Nowlan, trusted us impeccably, and allowed us the freedom to explore.  Nick, Chuku, Antonia, Freddie, and everyone welcomed us with open arms and treated us as their honored guests.  They went above and beyond- getting us water, snacks, and giving us neck massages- because we were conjoined at the head and had to stay still for long periods of time.  It was the opportunity of a lifetime and was definitely one of the best highlights to each of our careers.

ATM: (Emily) Boy Erased is such an important film. What do you hope viewers take from this film?

Emily:  I hope people are inspired to take action.  I am so thankful that this film brought to light a piece of the tragic history that the LGBTQIA community has gone through.  Many people don’t realize that conversion therapy still exists today.  In the US alone, 36 states still legally allow gay conversion therapy to take place.  That is disgusting.  This film is so important, and has already been a powerful vehicle to start the conversation and open up the hearts and minds to many… but I know we can go much farther.  I hope this film starts a dialogue about the stigmas of gender and sexual identity and will open hearts and minds to others different from ourselves.

ATM: (Elizabeth) Tell me about your upcoming movie Under the Silver Lake.

Elizabeth: Under the Silver Lake is releasing this April and was in competition at Cannes this past year.  It’s a neo-noir film by David Robert Mitchell, starring Andrew Garfield.  “Under The Silver Lake” was the first role I booked on my own- and I am so excited for it to finally come out!  The film is creative, surreal, and magical- I wore bejeweled makeup and a pink bob!  The script alone was even an imaginative masterpiece- adorned with drawings and pictures to further enhance the words themselves.

ATM: Can you talk more about the work you both do for Trans Lifeline.

Elizabeth: Translifeline is a national trans-led organization that gives support to trans members (including non-binary and gender non-conforming persons) in our community, specifically in fighting the epidemic of trans suicide.  We have volunteered our time with a lot of LGBTQIA youth, but were looking to get involved in other volunteer opportunities, and Translifeline felt like a perfect fit.  The National Suicide Prevention Hotline is an essential place for many people to get the crucial support they need, but for many trans persons, in reaching out for help, they struggle with being misgendered, wrongly profiled, and judged.  This organization was created to support, raise awareness, and specifically understand and address the needs of the trans community, and we are humbled to help support this cause.

ATM: Are there any projects in the works with your new production company?

Elizabeth:  We recently started our own production company, called The Hinklers.  It had always been a goal of ours to start a company where we create and share stories that we are passionate about, but it was assumed that that goal was sometime down the line… whenever we felt “ready”.  Not too long ago, our mentor, Jay Duplass, encouraged us to take the steps and start our dream now.  We never realized that by simply having a hunger to bring our community together through story was the necessary fuel we needed to get started.  Our passion for our company has brought so many amazing people and resources into our lives.

Emily:  Since then, we raced off creating three short films in three months. This process has helped us solidify each of our artist missions: creating a loving connection from a fearful world, and furthermore, to embody that in our production process with our filmmaking family.   Right now, I am developing a TV show, and Elizabeth is writing a feature.  There is something so exciting about combining our values of trust, connection, compassion, collaboration, and creativity into what we do and make, and we are ever grateful for Jay to ignite that spark in us.