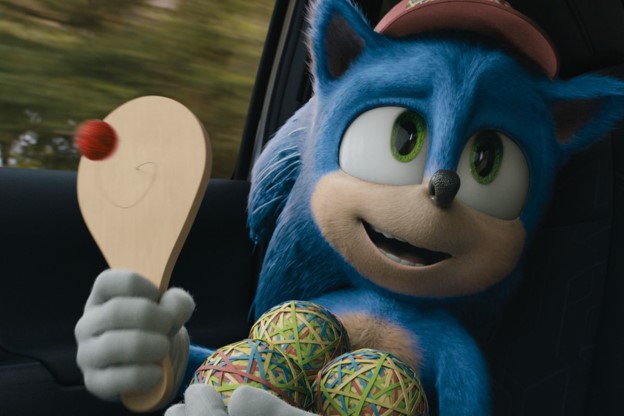 We have come a long way since that disturbing trailer with a human-like Sonic in 2019. If the studio did not take the time necessary to push back its release and fix the horrific CGI, then we’d be having a different conversation altogether. As it stands, they were able to save the movie and now we have another video game film triumph in the same boat as Detective Pikachu and Angry Birds Movie 2.

After a mishap on his home world, Sonic (voiced by Ben Schwartz) has to leave his planet with magical, golden portal rings (kind of like ones in Kingsman: The Golden Circle) and live in isolation for 10 years on Earth in the town of Green Hills. His alien-type presence shies him away from humans and his true entertainment comes from his talkative personality (included with narration) and supersonic speed. After playing baseball one night, he causes a powerful energy surge that has the government hire Dr. Robotnik (Jim Carrey) to investigate. Sonic decides to partner up with the local sheriff Tom Wachowski (James Marsden) to develop a methodical bromance to find his golden rings (that end up in San Francisco) and escape to a new planet.

This film deviates from trying to explore more of Sonic’s supernatural side and rather have him explore more of the human personality, something that is a bit odd. If the point of a video game film is to bring in elements from what created it, why sacrifice those for the same human elements we have seen in many movies nowadays? It feels that the jokes were stockpiled for kids as this is a family themed film, but it’s hard to resonate with the adults as many have enjoyed the source material in our younger days. The jokes also feel a bit outdated whether it’s about cops still doing the doughnuts or Olive Garden having unlimited pasta.

When the film does remember it is based off a video game, then it gets the ball rolling such as Sonic running across different geographical areas using his golden rings while being chased or having Robotnik settle in with his technological work or dancing along in his black themed bad-guy truck. The film is designed with us feeling the childhood vibrance again, making friends and defeating the bad guy in a cool manner.

Jim Carrey’s performance was the best part of this film, as he has been missed in the Hollywood industry. He channels his old performance of Ace Ventura to produce an eccentric type of character that delivers the absurd moments and over the top reactions to everything such as his assistant handing him a latte or his initial meeting with Sonic.

However, the end product doesn’t have anything remotely memorable about it since the plot is something we have seen countless times again and again. The bromance plot may stick for some but it has overstayed its welcome. Add in the crude humor and some scenes ripped off directly from other films, and you have a recipe for a film that tries too hard to appease and not letting one laugh out loud enough. There are several scenes where Sonic’s time manipulation is a direct rip-off from X-Men’s Quicksilver where he changes elements of the environment, and it feels insulting.

This film will serve to bring entertainment to those who watch it, but it will become lost in the memory of the film industry as there is nothing that standouts out other than Carrey’s quirky performance and Sonic’s adorable design. It’s time to bring some more original concepts to reality Hollywood, instead of relying on a worn-out formula. They can only exist to work for so long.