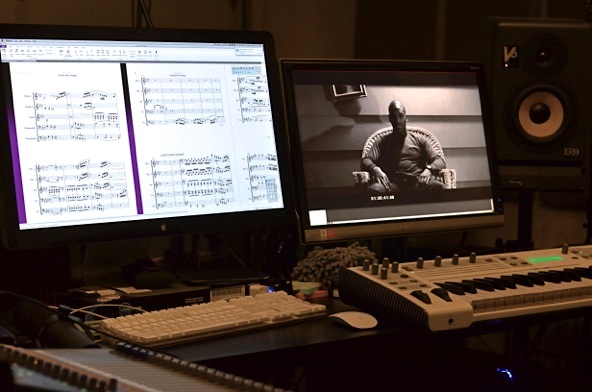 BEHIND THE MUSIC: Music Scoring in Film

Music on February 24, 2020 0Likes At The Movies
ShareTwitterFacebookInstagram

Creating a movie is already a tedious and strenuous task.  Creating an original score for said movie is just as intense and multifaceted.  Film scoring is a joint process between the director and composer.  Although the score for a film can sometimes go unrecognized and unappreciated, it is just important as any other aspect of film.  A film score creates part of the film’s soundtrack and can tie the entire project together and enhances the audience’s experience.  What you hear in a film is just as important as what you see.

Spotting. During film editing, the composer and their team begin creating the score.  The composer is shown a rough cut of the film, before the editing is completed.  While watching, they take notes and record specific times noting musical cues, where they begin, end, and how the music should change to match a scene.  This is called spotting.

Research. As with any other major project, composers conduct research before they begin composing.  Composers and their teams spend an extensive amount of time researching the film and its background, gathering materials to review surrounding topics in the film.  To create the score for The Da Vinci Code, Hans Zimmer research and studied the Fibonacci sequence.  Other times, composers and their teams put themselves in the culture of the film or the specific genre of music wanted for the film.  Ludwig Goransson, composer of Black Panther’s score, read several issues of the comic book and spent a month in Africa researching African musician and collecting raw materials for the soundtrack.

Sourcing raw material for a film score is a key component.  It helps create the foundation of the score.  In this stage, the composer is making decisions on aspects of the score such as instrumentals and sound design.

Syncing. The main goal of film scoring is syncing.  The composer works to sync dramatic events in the film with music in the score.  There are multiple methods for syncing which include utilizing sequencing software to calculate timing and mathematic formulas.

After a composer has figured out where the music is supposed to go, conducted proper research, and found raw materials for the foundation of the score, it is time for them to begin the writing process.

The High Note – Original Motion Soundtrack – Out on May 29th

‘CALL ME BY YOUR NAME’: PASSION AND PIANO