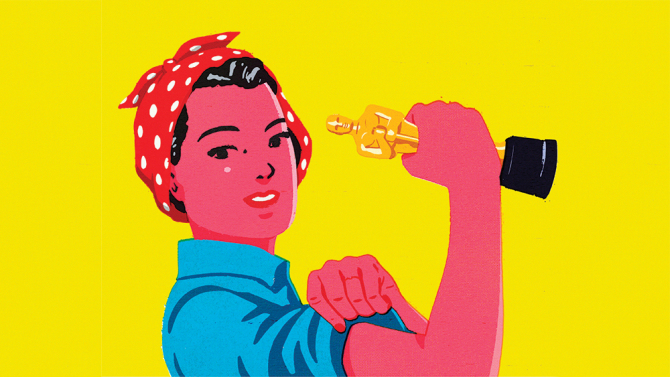 Reel 2 Real on June 17, 2020 0Likes At The Movies
ShareTwitterFacebookInstagram

Since its conception, film has been a man’s game. Women have always been in film but have rarely received the recognition they deserve. In 2013, women made up to nine percent of directors, according to a San Diego University study, and it has dropped down to only eight percent in 2019. The pay for making and acting in movies tends to be less than males with white women making 78 cents to every dollar a male makes, African American woman making 64 cents, Hispanic women making 56 cents, and Native American women making 59 cents. According to Forbes, it is reported that the top paid actor makes 2 ½ times as much as the top paid actress. This can be very discouraging for a woman looking to enter into the industry and frustrating for those that have already put work into it. Jennifer Lawrence is quoted saying,” …women negotiating for higher pay worry about seeming ‘difficult’ or ‘spoiled.” Women often struggle with being taken seriously in environments where men have dominated for so long and it can be hard to speak up when can be considered a ‘brat’. However, many women have found success regardless of the industry’s setbacks and have not only made great films but have also added to the film industry with their unique perspectives and techniques. The film industry may have seemed bleak but directors like Kathryn Bigelow, Ava DuVernay, and Greta Gerwig are paving ways for women to work behind the camera.

Kathryn Bigelow has thrived in the film industry as a director and producer. She is the first and only woman to win the Academy Award for Best Director for her movie The Hurt Locker (2008) among many other distinguished directing awards. She studied under the film theorist, Susan Sontag, who is famous for her essay on camp. She also gave Willem Defoe his very first acting role in The Loveless (1981). She is often seen as an auteur because she constantly changes the idea of the action genre by exploring gender and racial politics which is best seen in her movies Blue Steel (1989), Point Break (1991), and Strange Days (1995). She is also well known for her unique camera equipment that she has custom made in order to film distinct shots. This makes her camera work interesting and distinguished from other films. She is unique because she is one of the only women directors that have achieved success through si-fi, action, and horror genres; however, she is often criticized for it. Kathryn Bigelow is considered somewhat controversial for her extreme use of violence and grotesque imagery. She was criticized for her film Zero Dark Thirty (2012) for being pro-torture which followed the story of Amerca’s chase after Osama bin Laden. Her first short film called The Set-Up (1978) features two men fiercely fighting while two professors from her college narrate on the idea of what attracts people to violence. She was denounced by the Chicago Tribune which stated, “What’s a nice woman like Bigelow doing making erotic, violent vampire movies?” The movie the writer was referring to was Near Dark (1987) in which she highlights the problem of white American’s illusion of safety and control while also exploring homosexuality through a young boy falling in love with a vampire. In most of her movies, she mixes societal and political issues with violence in order to make a point or deliver a message. Kathryn Bigelow is quoted saying,” It’s irrelevant who or what directed a movie, the important thing is that you either respond to it or you don’t. There should be more women directing; I think there is just not the awareness that it’s really possible. It is.” She is an inspiration to many and has paved the way for future women directors.

Another inspiration to women in film is Ava DuVernay who was the first African American woman to receive the 2012 Sundance Film Festival Award and the first African American woman to be nominated for Golden Globe Award for Best Director. What makes DuVernay’s work special is it is often based on real-life experience. Her movie Selma (2014) was inspired by her father who witnessed the marches with Martin Luther King Jr. and where she would often visit as a child. Her short film Saturday Night Life (2005) was based on her mother’s struggles as a single mother with three children. She also directed I Will Follow (2012) which was inspired by her aunt, Denise Sexton, and was praised for being,” one of the best films I’ve seen about coming to terms with the death of a loved one,” according to Roger Ebert, a well-known film critic. She is also known for speaking out and making films about African American discrimination in America and was commissioned by the Smithsonian to make a short film about African American history. She made a twenty-two-minute film that featured important events that happened on Auguste 28th throughout history. Events include the lynching of Emmett Till, Martin Luther’s speech I Have a Dream, and Obama’s acceptance of the Democratic nomination. It was the debut of the Smithsonian’s opening of the museum in 2016 and was named August 28th: A Day in the Life of People. She has inspired many with her documentary 13th (2016) which studies the mass incarceration of POC with the title of the amendment that was supposed to abolish slavery. It is critically acclaimed and also won a Peabody Award. In 2018, DuVernay was chosen as one of the first African American women to direct a movie with over a 100 million dollar budget, and the second woman next to Patty Jenkins. She directed A Wrinkle in Time (2018) which earned $33 million in the first week and was second in the box office next to Black Panther. A Wrinkle in Time was admired for its strong female roles and inspiring plot. Ava DuVernay was quoted saying,” Ignore the glass ceiling and do your work. If you’re focusing on the glass ceiling, focusing on what you don’t have, focusing on the limitations, then you will be limited.” DuVernay is a woman that has raised the money from her own pockets to do her short films, has made them independently, and created a space for her work that no one can interfere with. She has not only become an inspiration to women but also to POC who are often blocked from receiving the success they have worked for.

Greta Gerwig is a woman in the film who has had a lot of recent success with her two films Lady Bird (2017) and Little Women (2019). She started as an actress until she did a collaboration with Joe Swanberg on Nights and Weekends (2008) in which they shared directing duties. She, like Ava DuVernay, based both of her movies on personal experience.  Gerwig says, “I tend to start with things from my own life, then pretty quickly they spin out into their own orbit.” She also encourages her actors to incorporate their personality with that of the characters to make a more authentic character and acting style. This comes from her previous interest in mumblecore film in which the acting is primarily natural and focuses more on dialogue than plot. Gerwig focuses on relationships in her films, most of which focus on female characters. She also focuses on character growth and tends to strip most things of ‘showiness’ to keep her films realistic. She is still a new director, with only having two movies out right now, but it is exciting to see what she will do next. She already has her unique style of realism that takes a strong presence in her films and both have been highly successful in the box office. She might be on the path to the next female auteur that can help add to the affluence of women in film.

These women, new and old directors, have taught women that it is not impossible to become something great in the film industry. While women directors remain at only eight percent currently, with these brave women paving the way, we will see a rise in women directors in years to come. If you are an aspiring woman in film it can be hard to know how those women managed to become successful but there are resources out there. Women in Film (WIF) is a non-profit organization that is dedicated to helping women enter the movie world that helps educate, bring connections, and fund films made by women. There is also The Woman’s International Film and Arts Festival (WIFF) that helps promote and praise woman’s accomplishments in the industry. There is The Alliance of Woman Film Journalists (AWFJ) which supports women film critics who work in print, broadcasting, or media. There are many more organizations out there that can and will help women succeed in film. The industry is not just a man’s game anymore. Soon, the statistics will change and women will continue to achieve and breakthrough that celluloid ceiling.