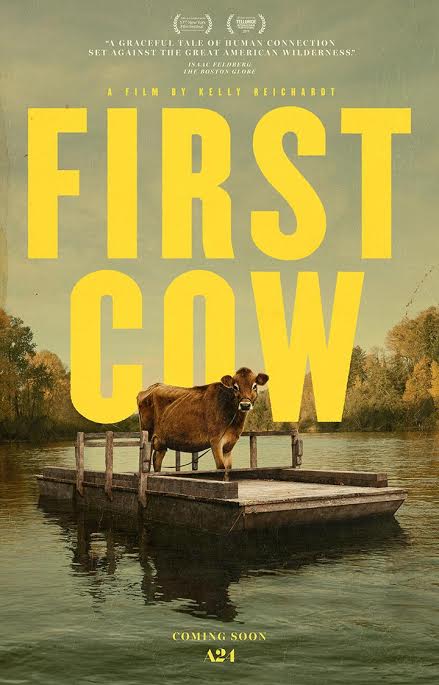 Movie Reviews on July 20, 2020 0Likes At The Movies
ShareTwitterFacebookInstagram

First Cow is, at its core, a story about friendship. It tells the tale of an unlikely partnership between two dirt-poor men trying to make their way in the unforgiving new world that is 19th century Oregon; a world where there is little joy to be had outside of the rest after a long day’s work. Otis “Cookie” Figowitz is a big-hearted cook who has made his way west with a group of fur trappers. Fate has him cross paths with King-Lu, a willful Chinese globetrotter who has heard the call of opportunity in these new, untamed lands. Such an opportunity presents itself to the two men in the form of a dairy cow; the first dairy cow ever to be brought to the Oregon territory.

Director Kelly Reichardt is no stranger to making films that deal with working-class individuals in a style that is best described as “sparse”.  First Cow is no exception. This sparsity, however, is by no means a negative quality in the context of this film, it’s done well to a certain extent. The no frills nature of how First Cow is shot really makes the viewer take in the natural beauty of a land that’s gone untouched by western civilization. To quote King-Lu, “History isn’t here yet.” There’s a serenity to the environments that is only enhanced by the delicate score, comprised primarily of lightly plucked harps, banjos and guitars. These elements combine to create an exceedingly easy watching experience, but there are shortcomings that come as a result of the leisurely feel the film has. Most noteworthy is the issue of the pacing, which slowed to a crawl at a few points. Even still, these periods of lingering feel totally intentional and have their narrative purpose, so one has to stop and consider all the significance to be found in these moments before pinning them down as obstructive. Though First Cow lacks copious amounts of depth, the beauty of it is found in its simplicity. This being said, First Cow is not a film without substance.

The aspect that’s most powerful here is the writing. The dialogue is full of little gems that invoke reflection on the foundations this country was built on, littered with themes of white colonialism, the dilemmas of poverty, and morality as a whole. The quality of the script shines brightest in the interactions between the two protagonists, which are all very wholesome. This is particularly true in the case of Cookie, who repeatedly carries out the simplest, purest acts of kindness possible. He is a timid personality, full of love and genuine care for the wellbeing of those around him (particularly those of the bovine persuasion). King-Lu’s more adventurous, risk-taker identity makes him a perfect foil to Cookie’s “play it safe” mindset in their endeavors to make their fortune. The performances by John Magaro and Orion Lee are both full of quiet nuance and care, truly stellar stuff.

In all, First Cow is a film that knows the importance of taking its time. As a result, it certainly won’t suit every viewer. Some may find the pacing to be far too slow for a two-hour runtime, some may be bored by the deliberate lack of bustle. But those who engage in more active viewership will be greatly rewarded by the sheer narrative substance this film possesses. First Cow tugs at the deep-rooted ache that human beings have for companionship and prosperity and leaves the viewer feeling humbled with its hushed full-circle ending. It’s films like this that really keeps the love for cinema alive, not because it’s flashy or innovative, but because it succeeds at telling a touching story in its own distinctive way.