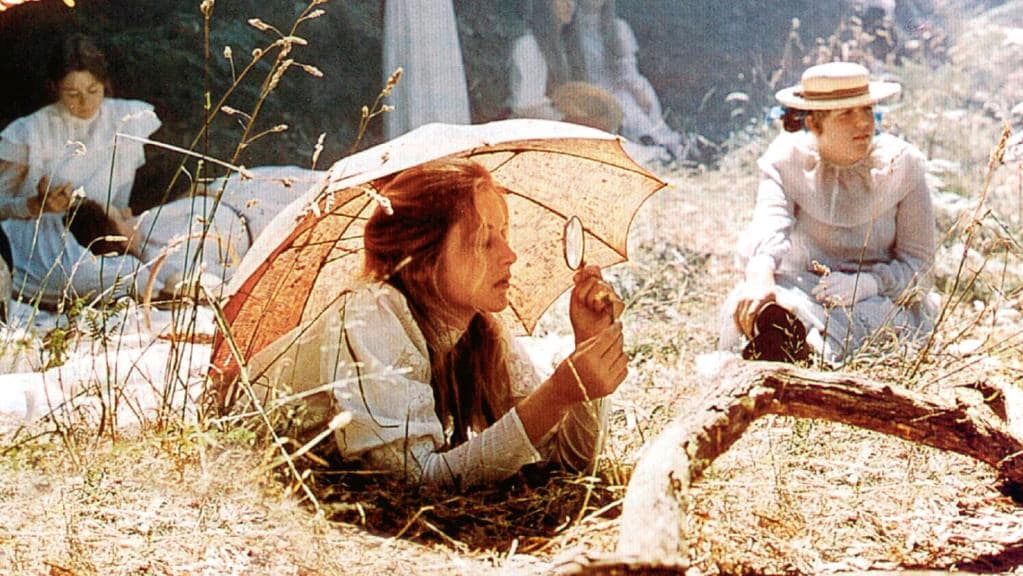 Spotlight on August 13, 2020 0Likes At The Movies
ShareTwitterFacebookInstagram

“What we see and what we seem are but a dream, a dream within a dream.”

The aesthetic presentation of the opening line just as much encapsulates the essence of the film as the actual content of the line. Over gorgeous shots of the Australian dawn, it is uttered in a hushed and sultry whisper, before the soundscape is enveloped by pan flute. It perfectly sets the stage for the dreamlike aura and multilayered enigmas that define Peter Weir’s sumptuously photographed “Picnic at Hanging Rock”, which turned forty-five years old over the weekend.

The film has become famous in the cinematic canon for its supposed lack of a traditional resolution. The inciting incident, as is standard for most mystery films, occurs within the first half-hour. The girls at a local school are treated to an afternoon picnic near Hanging Rock, a real-life geological marvel located in Victoria, Australia. Despite the danger of snakes and the warnings of their headmistress, three schoolgirls—the beautiful Irma, the mysterious Miranda, and the intelligent Marion—and one of their teachers, Miss McGraw, go off to ascend the Rock, only to disappear without a trace. Subsequent searches prove useless. Eventually, Irma is rescued but remembers nothing. The rest of the party is never found, and the events at the Rock are never explained.

The plot, on the surface level, recalls Michelangelo Antonioni’s seminal 1960 classic “L’Avventura”, which similarly sets up the disappearance of a young woman in the first quarter, and then offers no answer to her fate. Yet, though the basic stories resemble each other, “Picnic” imbues itself with distinct Australian flavors. “L’Avventura” focused its camera lenses on the Italian coast and its burgeoning urban centers; “Picnic”, on the other hand, aims its gaze on the wildlife and untamed terrain within the halfway-uncharted Australian Bush. And, whereas “L’Avventura” could potentially be reduced to a commentary on the spiritual and emotional malaise of the bourgeoisie, the thematic thrust of “Picnic” is much harder to pinpoint.

Indeed, it is the Rock itself that refuses to yield to definite interpretation, the key symbol that withholds that which it is symbolizing. For those inclined towards horror or the supernatural (and the literal, in terms of story resolution), the Rock could be the site of an alien abduction, the abode of cannibalistic serial killers à la “The Hills Have Eyes”, or perhaps a subtler, more mysteriously nefarious form of a Lovecraftian beast. Citations for these arguments could be found in the change in sound design when the girls are near or around the rock: the ominous rumbling that may or may not be diegetic, the sudden burst of slasher-esque violin, and the distorted screaming. Other have seen the Rock as a commentary on the relationship between Australian people and the Aboriginal population, specifically on how thin the line is that separates the seemingly “civilized” nature of the Australians from the less leisurely and less fancy way-of-life of the Aborigines. As the girls ascend Hanging Rock, they take off their socks and other pieces of outerwear, suggesting a connection with a more primordial and naturally-inclined state of existence.

The most-agreed upon interpretation of the Rock, however, is that it is a symbol of carnality, the point of transition between platonic innocence forced either by pre-pubescent adolescence (as was initially the case for the three girls) or repressive social mores (as was the case for Miss McGraw) and the state of a fully developed being with acknowledged sexual needs and desires. The release inherent in such a transformation is symbolically encoded when Miss McGraw talks of the potential power of the Rock, how, even though it seemingly lies dormant and unassuming, lava could erupt from it at any moment in a spectacular display of unexpected vivacity. Much has already been written too about how the headmistress’s warning of snakes on the Rock is a phallic symbol, and how certain shots of openings within the Rock resemble orifices. Additionally, through this lens, the gradual undressing of the girls—missing shoes, socks, and corsets—and of the teacher Miss McGraw (she was last spotted running towards the rock without her dress on) is not a commentary on the coexistence with Aboriginal people, but rather the repudiation of that which seeks to hide the flesh, to obfuscate the sensuous. Finally, when Irma returns to visit her schoolmates, she is clothed in a dark red dress, the color timelessly associated with lust and desire. As part of the emotional fallout that usually stems from those two passions, her schoolmates begin to attack her when she cannot answer what happened on the Rock in a fit of jealousy and frustration originating from their own inability to attain that next badge of adulthood.

Even though the events at Hanging Rock in themselves are ample food for thought, there are a couple intertwining storylines that surround the central mystery. These include the tragic trajectory of Miranda’s troubled roommate Sara and the young Englishman Michael who, having spotted the girls briefly on their way to the Rock right before their disappearance, subsequently becomes obsessed with finding them, often dragging his valet Albert along for his searches. The connection between these two threads provides the only uncovering of a hidden truth, the singular revelation throughout the whole piece. Interestingly enough, it hearkens back to the opening line directly: the truth is revealed in a dream, literally. This reveals the other major thematic undercurrent of the work, namely the tendency of people to project the subjectivity of their own subconscious onto the outside world.

Throughout the film, characters are filtered by the various perceptions of other characters. Nowhere is this more apparent than the character of Miranda, who is gazed upon by numerous people and whose personage is thus fashioned according to the whims and fancies of those people. One of the teaching apprentices lovingly dubs Miranda as a “Botticelli angel”. For Michael, though he only saw her for a brief sliver of time, Miranda seems to become a symbol of grace, his daydreams of her in her sunlit white dress often segueing into a tranquil swan floating on a blue lake. It is appropriate that many of the shots of Miranda are that of her reflection in mirrors and hand mirrors—even in some direct shots, her face is obscured by a magnifying glass. There is never an opportunity to see the true Miranda: all that is available are various copies and reflections formed by the biases and subconscious ideations of those who perceive her. Such is the case for all judgments and perceptions, the film seems to argue. Thus, it makes sense for the only bit of truth to be revealed in a dream. After all, in accordance with the opening line, dreams ought to be equated with what we see and what things seem to us, since all are inherently borne from the inner contents of our own minds.

Finally, the historical importance of “Picnic at Hanging Rock” cannot be understated. By the 1970s, the Australian film industry was virtually non-existent despite having been an innovator in the silent film days. The Australian government underwent several projects to fund cinematic visionaries who could illumine Australian experience and portray authentic Australian voices on the silver screen. “Picnic” was one such effort and, along with Nicolas Roeg’s early efforts (e.g., “Walkabout”), helped bring international renown and recognition to what would be dubbed the “Australian New Wave”, igniting a cinematic renaissance in Australia that reclaimed the country’s former reputation as a legitimate moviemaking center. The success of “Picnic” also catapulted its director Peter Weir to international fame. Weir would go on to make several classics, including “Gallipoli”, “Witness”, “The Truman Show”, and “Master and Commander: The Far Side of the World.”

In all, for its contributions to Australian cinema and its enigmatic enchantments, “Picnic at Hanging Rock” remains essential and engaging forty-five-years later.

In the Cut with Actor Dorien Wilson