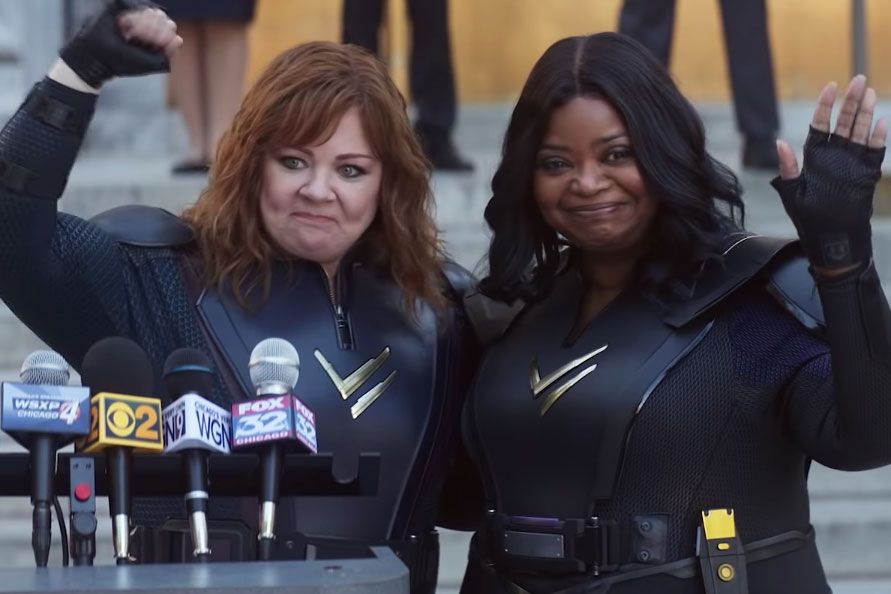 Movie Reviews on April 13, 2021 0Likes At The Movies
ShareTwitterFacebookInstagram

If you love a good Netflix comedy to pass the time on a Friday night, then look no further than Thunder Force. The film stars Melissa McCarthy and Octavia Spender as Lydia and Emily, best friends in grade school who fall out for 20 years then are supposed to reunite for a class reunion. Emily (Octavia Spencer) does not attend the reunion as planned, so Lydia goes to her building where she is a geneticist developing a way to defeat Miscreants, who are sociopaths and criminals turned lethal villains with superhero-life powers. The whole plot is a bit quirky, and you can expect to know what is going to happen next. But the funniest part is how unlikely the pair are as characters and actors.

McCarthy is known as a comedic queen in her own right as seen in movies, like Spy or Bridesmaids, but Spencer is known for more serious roles in movies, such as The Help or Hidden Figures. So, to see these two headlining an action comedy will turn a few heads automatically. Then, when you add in that they are playing middle-aged superheroes who have completely opposite personalities, well it gets you to click the Play button.

The film begins in the “past” with Emily and Lydia as best friends after Emily loses her parents in a Miscreant crossfire accident. The audience can tell this will be the character’s motivation from the start as she tirelessly works even in her teens to learn and be the best budding geneticist (the field her parents were also in). Lydia, on the other hand, is a rough around the edges, protective friend who does not seem to have much going for her in the academic department.

Fast forward after a huge, but ultimately petty fight they have in their teens, and what is expected comes true. Emily is a star in her field and a CEO of her own company while Lydia operates a forklift. The plot picks up when Lydia accidentally gets injected with what is later known to be the serum Emily designed to make regular people into superheroes. Lydia gets the strength serum while Emily will take the invisibility serum. Between the two, they make the “perfect superhero” to take down the latest Miscreants terrorizing modern-day Chicago.

There are training scenes that have the typical goofy laughs and scenes where the pair fight bad guys. The funniest, but also most awkward one, is their first try at superhero work that breaks away to a fantasy dance between Lydia and a half-Miscreant (self-proclaimed half-Creant, which is its own corny joke throughout the movie) named Crab Man, played by Jason Bateman. Ultimately, the story’s climax involves a seemingly normal, shifty politician whose running for local office as The King, played by Bobby Cannavale, who turns out to be a Miscreant himself trying to take over the world through politics (there can be a pretentious conversation about that alone, but this isn’t the time).The bad guys lose, good guys win, and we get a bonus superhero in the form of Emily’s super intelligent daughter

‘NO TIME TO DIE’ Review: Daniel You’re A Star