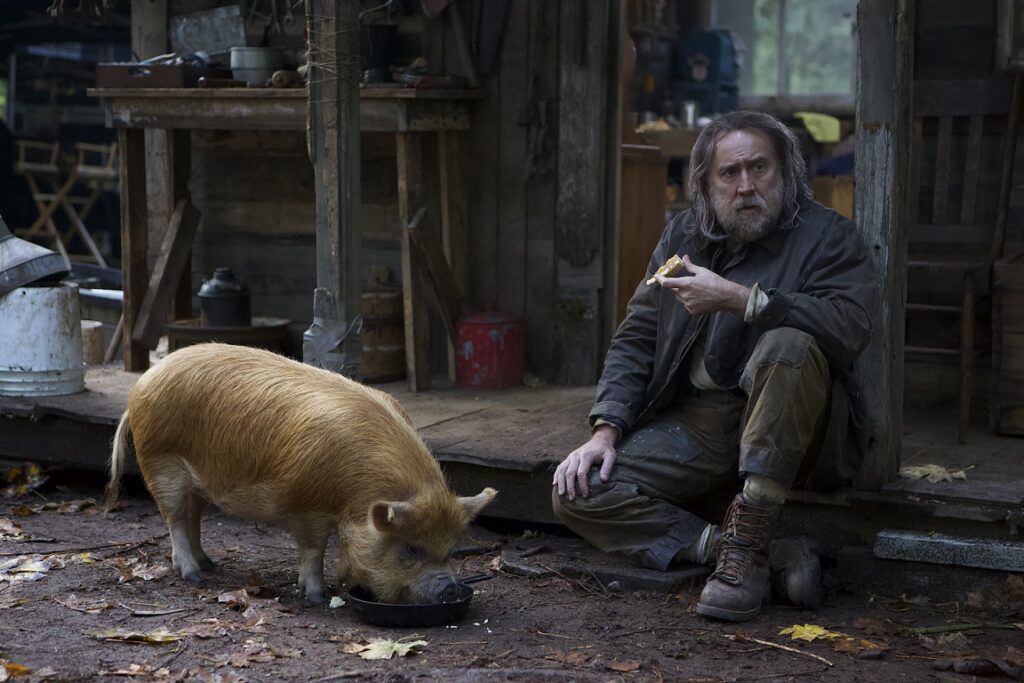 Movie Reviews on July 15, 2021 0Likes At The Movies
ShareTwitterFacebookInstagram

Nicholas Cage is notoriously hit-or-miss in his career. He has gone from the highs of staring in a Martin Scorsese film and Face/Off to the lows of scraping the bottom of the direct-to-video barrel. Cage is one of the best actors of his generation, but has at times had a similar path to Bruce Willis where it feels like their face is on a new poster for a movie you have never heard of every few months. But for all of those movies, you occasionally get a film like Pig, which is a surprisingly emotionally-driven film for Cage.

Pig follows a truffle hunter named Rob (Cage), who is on a mission to rescue his pig with the assistance of one of his clients, Amir (Wolff).

On paper, Pig sounds like John Wick 2.0, a classic melodramatic revenge-thriller with lots of violence and gore. But instead, Pig is much more methodical and tender, very similar to First Cow. Cage is indeed on a mission to rescue his beloved pig, but he isn’t knocking down doors and kicking butt like Keanu or Liam Neeson would in these types of roles. It’s a surprisingly reserved role for Cage, who really inhabits this role of an isolated man. His character of Rob only has a moment or two where he loses his cool, otherwise he is a very timid character. Simplistic also describes the dialogue which was written by director Michael Samoski. That is not to say the dialogue is bad, but it is very easy on the ears aside from Rob’s mumbling throughout.

Credit to Alex Wolff as well, who has a really great role as Amir, a client of Rob’s turned accomplice on his mission to save his pig. Amir begins as a whiney trust fund baby, but matures over the course of the runtime as his backstory is slowly unraveled. He stepped up to the plate and flourished best when demanding respect from Cage’s character.

Pig is also director Michael Samoski’s feature-length directorial debut, and an impressive feat at that. The cinematography stands out in Pig, with a heavy dose of handheld camerawork that truly enhances the film. When a character falls to their knees in despair, this choice helps viewers feel the emotion of the scene. It is also a beautiful film, taking place in both the city of Portland, Oregon and the surrounding woods. The opening credits alone feature some great shots and mesh perfectly with the score composed by Alexis Grapsas and Philip Klein. As much as Pig sounds like a thriller, don’t go in expecting Nicholas Cage going berserk on nameless henchmen on his way of retrieving his pig. Aside from the scene where the pig is taken and one Fight Club-inspired scene, there is little-to-no violence to be found throughout Pig. It’s tender, and brings out a different side of Nicholas Cage. Alex Wolff has his best performance since Hereditary, and that all makes for a really good film. At only 92 minutes, Pig probably could have benefitted from 10-15 more minutes to further show the backstories of Cage and Wolff’s characters, but as it remains, it is easily one of the best films Cage has done in years and deserves recognition as such.