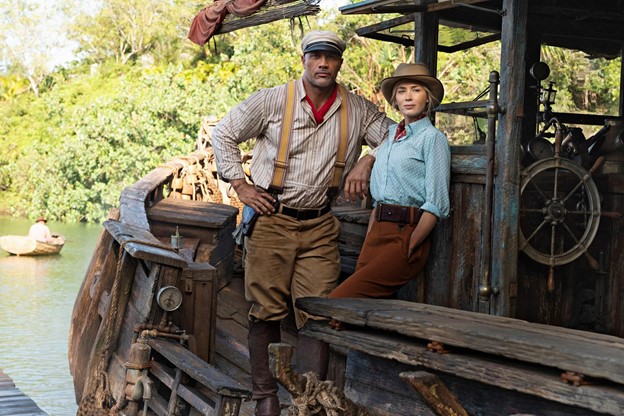 Who knew that a movie based on one of Disney’s theme park rides could prove to be somewhat pleasant (yet highly derivative)? I mean, it has a touch of Pirates of the Caribbean, The Mummy, Indiana Jones, African Queen, and possibly Star Wars. Again, like how Dwayne “The Rock” Johnson has done in his other recent works of late, such as Skyscraper, Rampage, and Baywatch, it’s more about getting some fun out of your money. So, in a sense, Jungle Cruise works. Honestly, it may be even better than the attraction at Disney World itself. The film introduces Lily (Emily Blunt) stealing an artifact to find some mythological tree that grants healing powers. In the early 1900s, it’s easy to see why someone, especially a woman, would get shunned by the community. Taking matters into one’s hands throttles the rules. She heads to Brazil with her brother (Jack Whitehall) while being tailed by an ambitious German aristocrat (Jesse Plemons) and his minions. There, she meets Frank (Johnson himself), a satirical steamboat captain, I mean skipper, who agrees to help the hellbent Lily find the tree.

Many of us have become accustomed to Johnson’s chemistry with other actors/actresses. He brings out hilarious moments with Kevin Hart (Central Intelligence) and constantly keeps a straight face when hurling insults at Jason Statham in the Fast and the Furious films. Then, there are other times where he is angry with someone like John Cena (check out their promos leading to their “once-in-a-lifetime” WrestleMania 28 match years ago) or has behind-the-scenes heat with Vin Diesel (Fate of the Furious). At this point, book Johnson and one of his cousins to take on Cena and Diesel (its money guaranteed, whether Disney produces it or not). In today’s time, Johnson is the de facto Sylvester Stallone or Arnold Schwarzenegger, a perspicuous representation of the big guy with muscles and charm that can move the box office needle.

Coming back to the main point, his moments with Emily Blunt are very amusing and keep the film floating on the river (pun intended). It stays infectious, and the charisma helps smooth out things. Johnson has a game plan here to deliver so many puns that he might have been wearing a “sarcastic dad” shirt underneath. Who knows, but he and Mary Poppins make digs at each other. Or she punches him.

Other than that, this is a very remote film with a repetitive schedule. So many times, we have witnessed films about some ancient relic that people want to steal and use for their gain. And so, the good guys must stop them or take them out. And then the climactic battle inevitably ends with the good guys winning and using the power virtuously. It sounds like one of the Jumanji films in disguise (which coincidentally stars Johnson). Director Jaume Collet-Serra doesn’t have much that interests minus Johnson’s and Blunt’s performances.

It is a shame this film is more like a Disney remake than an original. Much of the material becomes bulked up by utilizing several other films’ techniques, and Johnson and Blunt deserve better. Without them, Jungle Cruise most likely might have stuck as a dead-end ride.